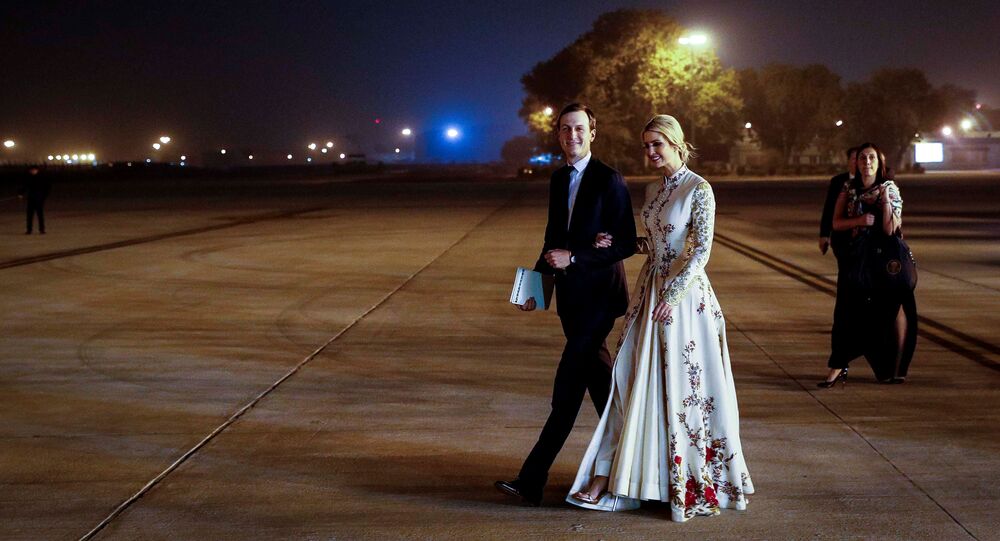 New Delhi (Sputnik): Melania Trump and her stepdaughter Ivanka are on a whirlwind of a tour to India from 24-25 February along with the US President. The two ladies representing the first family of the US chose their wardrobe diligently, giving it a classic yet chic look while tastefully embracing Indian culture with a dash of desi vibes.

President Donald Trump’s first and arguably his favourite daughter Ivanka Trump, who is also a key adviser to him, looked every bit elegant in an all-white long indo-western coat with a middle slit and matching pants.

Ivanka rocked Indian-inspired high fashion by opting for Indo-Western fusion attire, in the way of a sherwani, by ace designer Anita Dongre. The word "sherwani" is closely associated with big fat Indian weddings, where bridegrooms are often adorned in the traditional costume on their wedding days.

Describing Ivanka’s outfit, acclaimed fashion designer Anita Dongre told India Today that her dress is made out of handwoven silk from Murshidabad, West Bengal state. The outfit holds significance as it was styled 20 years ago and is timeless.

With her flowy floral dress, First Lady Melania Trump appeared to be making a soft diplomatic statement through her fashion choice. The white printed midi-dress has lotuses embroidered on it.

Incidentally, the lotus is also the symbol of host Narendra Modi's political party the Bharatiya Janata Party. And, the detail is attracting the attention of many Indians.

. @FLOTUS in India today appears to be wearing this @HouseofHerrera floral patterned dress. The belted shirt dress has become one of her signature silhouettes. (Hi, I’m Kate.) pic.twitter.com/uu9m4dbWIs

FLOTUS had made a powerful statement on the first day of her visit to India on Monday by stepping out of the plane wearing a chic all-white jumpsuit and creatively choosing a vintage brocade green sash to wear around her waist.

With her former modelling career, Melania is known for choosing her own outfits rather than following advisors. She wore an Atelier Caito for Herve Pierre white jumpsuit with a green and gold belt, with a meaning behind it.

“The sash was cut in an early XX century Indian textile documents I found in Paris through very good friends who are collectors,” stated the designer on Instagram.

“The sash is made out of green silk and gold metallic thread. We used the border which was the most Interesting piece we could use as it was a vintage piece,” the post added.

Arriving in India, the First Lady #flotus is wearing a white jumpsuit from @atelier_caito_for_herve_pierre in crème crêpe . The sash was cut in an early XX century Indian textile documents I found in Paris through very good friends who are collectors. @herve_pierre_creative_director . The sash is made out of green silk and gold metallic thread . We used the border which was the most Interesting piece we could use as it was a vintage piece .