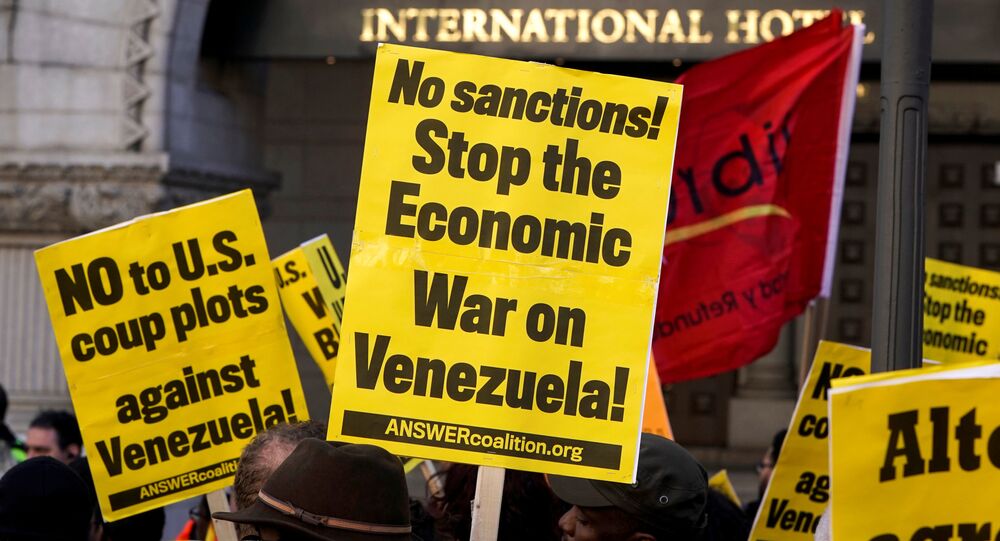 The remarks come after US Secretary of State Mike Pompeo accused Iran of having a financial presence in South America and “supporting efforts at terrorism throughout the region”.

The Iranian Foreign Ministry has denounced what it describes as “ridiculous” allegations by US Secretary of State Mike Pompeo that Tehran is interfering in Venezuela’s domestic affairs.

Iran’s Press TV cited Foreign Ministry spokesman Seyyed Abbas Mousavi as saying that it is Washington that should stop its “blatant” meddling in Venezuela’s internal affairs and halt its targeting of the Latin American nation with “economic terrorism”.

READ MORE: All US Diplomats Left Venezuela After Ultimatum From Caracas — Pompeo

Mousavi blamed the US for plundering $30 billion worth of Venezuelan foreign-exchange reserves and urging “the Venezuelan nation to either riot against their legitimate government or face starvation”.

“The US under Trump seeks to turn Latin America into its backyard, just like the way it was in the 19th century. However, nations of the world, particularly the people of Latin America, have woken up and the wheel of time will not move backwards”, Mousavi underscored.

He added that a group of Iranian specialists are trying to “improve the water and electricity systems in Venezuela” at the request of the South American country’s government.

The comments followed Pompeo’s interview with the Voice of America, in which he claimed that “Iranian money remains in South America being used for malign purposes, supporting Hezbollah, […] transnational criminal organisations […] and efforts at terrorism throughout the region.

“This is Iran intervening in South America. That's not in the best interests of the South American people, and the United States stands ready”, Pompeo argued.

He also dubbed the Islamic Republic “the world's largest state sponsor of terror”, calling it a “a global threat”.

Earlier, Pompeo made it clear that “every single tool and every single option” for what he described as US efforts “to restore democracy” in Venezuela remains on the table.

While the US was quick to recognise Guaido, Russia, China, Turkey and a spate of other countries supported the constitutionally elected president Maduro, slamming the broad Western support for the Venezuelan opposition leader.

Maduro, for his part, insisted Guaido is a US puppet and accused Washington of attempting to orchestrate a coup to topple Venezuela’s legitimate government.

Pompeo: US to Take Actions Against Anyone Who Endangers Personnel in Venezuela