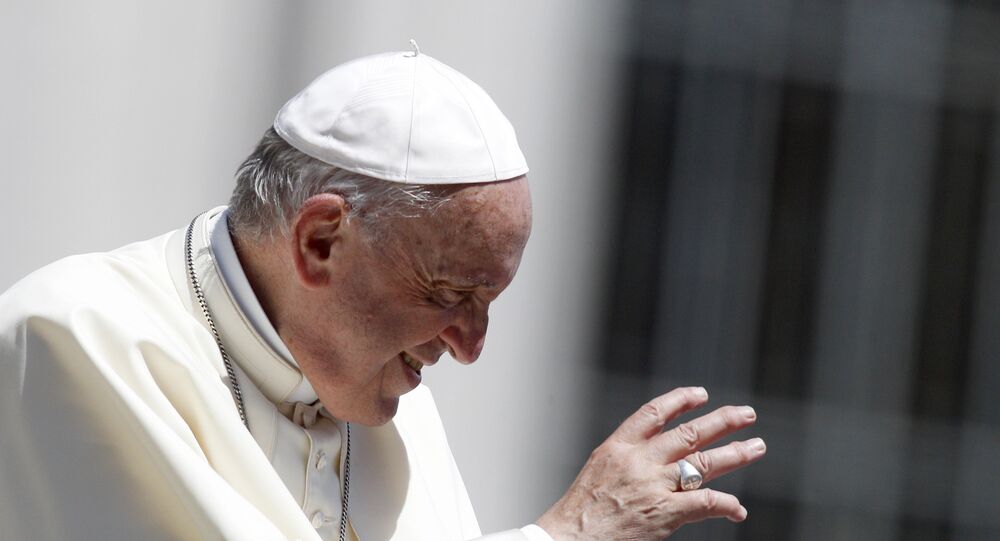 While the Roman Catholic Church is struggling to keep on top of a raft of sex scandals that keep emerging in the US, Australia and Latin America, Sputnik takes a closer look at what reports of child sexual abuse and sexual misconduct have come to light this year.

On Monday, Pope Francis issued a letter to all Catholics, in which he condemned decades of sexual abuse of minors in the Roman Catholic Church and acknowledged that the Vatican has dragged its heels for far too long in responding appropriately to multiple felonies.

This comes at a time when the church is rocked by a raft of large-scale sex scandals on several continents, involving the victimization of thousands of children. Although some reports date back to the 1950s, they first came into public spotlight in the 1980s. The sexual scandals continued to come to light year after year, and 2018 was no exception.

The Pope's statement came days after a sexual abuse scandal made headlines in the US. Last week, a Pennsylvania grand jury accused more than 300 "predator priests" of child sex abuse, after an investigation, largely based on secret church archives from six dioceses. More than a thousand victims who were abused as children were identified, with rape and molestation cases dating as far back as 1947.

The grand jury report noted, however, that there could be thousands more minors whose records were lost or who were afraid to come forward. Pennsylvania Attorney General Josh Shapiro called it the "largest, most comprehensive report into child sexual abuse within the Catholic Church ever produced in the United States."

On 30 July, Australian Archbishop Philip Wilson resigned after being convicted of covering up sex abuse by pedophile priest James Fletcher, who died in jail in 2006 while serving his 10-year sentence for nine child sexual abuse charges.

According to the court documents, Wilson failed to report to police the abuse of two altar boys in the 1970s in a bid to protect the Church's reputation. He received a one-year prison sentence and was only eligible for parole after six months. During his trial, he denied any knowledge of the crimes and later said he would appeal against his conviction.

Archbishop Philip Wilson stepped down two days after Pope Francis accepted the resignation of Cardinal Theodore McCarrick, a former archbishop of Washington DC and one of the most prominent Catholic leaders in the US, amid claims that he sexually abused a teenager almost fifty years ago, while he was serving as a priest of the New York archdiocese.

McCarrick, 88, stepped down from public ministry in June as a 60-year-old man alleged that the priest molested him when he was a young boy. When the claims surfaced, the priest cited "absolutely no recollection" of the reported abuse. However, American Church officials found the allegations to be credible and substantiated.

In June, Monsignor Carlo Alberto Capella, a former Vatican envoy, was sentenced to five years in prison for child pornography offences. The Vatican officials claimed that over 40 pornographic photos and videos, some showing sexual contact between adults and pre-pubescent children, were found on his mobile phone.

Capella pleaded guilty at a Vatican court, saying he was going through a "personal crisis" while working at the Vatican embassy in Washington DC.

On 18 May, all of Chile's 34 Catholic bishops offered their resignations in an unprecedented move amid reports that one of them, Juan Barros, covered up the sexual abuse of minors by pedophile priest by Fernando Karadima in the 1980s and 1990s.

Rocked by the news, Chile launched a massive investigation into 158 members of the national Roman Catholic Church. The probe included reports of cover-up cases and the abuse of 266 victims, including 178 minors, with some cases relating as far back as the 1960s.