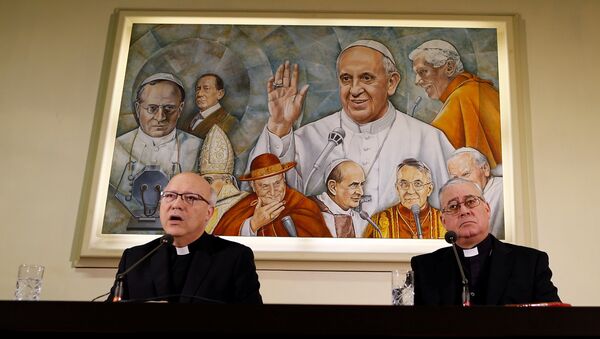 Child abuse scandals had been swirling around the Chilean church for decades, but received new impetus four months ago, following the visit of Pope Francis to the Latin American country.

All 34 bishops of the Catholic Church in Chile have offered to resign over the child abuse scandal cover-up, which provoked widespread backlash within the Catholic community.

The bishops also asked for forgiveness from the victims of the abuse and from the Catholic Church for their "grave errors and omissions."

With all the chaos going on — a reminder of this mornings story again: ALL 34 of #Chile Bishops resign over #sexabuse scandal #QAnon
"This is first known time in history that an ENTIRE national bishops conference… resign en masse"
#pedogate #vatican #pope
Here they are: pic.twitter.com/GHX1hG2qi6

​"We have put our positions in the hands of the Holy Father and will leave it to him to decide freely for each of us," the bishops announced in a joint statement read out by their spokesman, Bishop Fernando Ramos.

In a confidential document, which was leaked to the T13 channel, Pope Francis accused the Chilean bishops of "grave negligence," of pressuring lawyers and of destroying evidence of abuse cases.

"No one can exempt himself and place the problem on the shoulders of the others," the Pope wrote in the paper.

​The scandal originally unfolded in 2015, when Juan Barros, the newly appointed Bishop of Osorno, was accused of blocking the investigation into his friend, the priest Fernando Karadima. An influential spiritual leader among the Chilean elite, Karadima was found guilty in 2011 by the Vatican of sexually abusing young boys in the 1970s and 80s and sentenced to a lifetime of "penance and prayer," but with no civil prosecution.