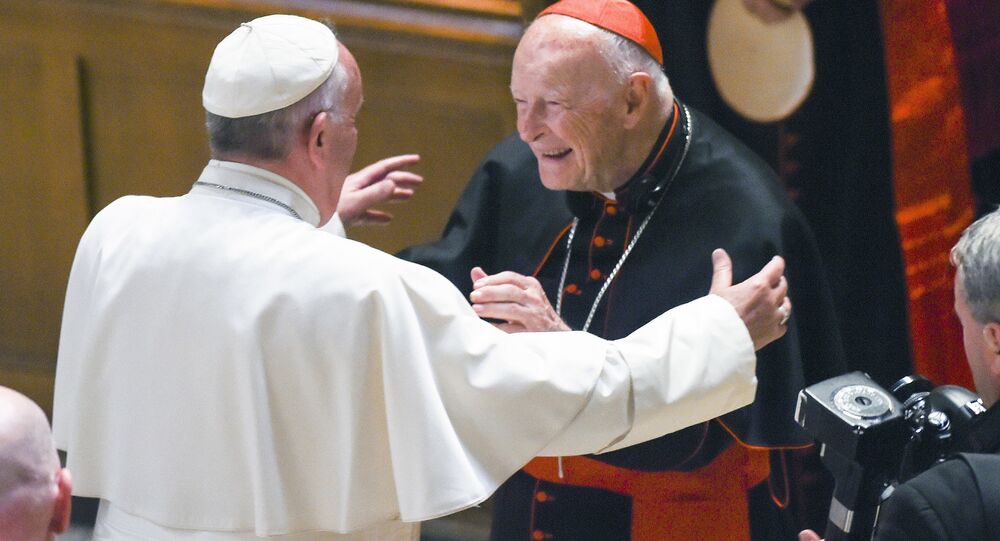 The news come as the Vatican is gripped by a large-scale sex abuse scandal in Latin America, which has already led to the resignation of all the Catholic bishops in Chile.

On Saturday, Pope Francis accepted the resignation of Cardinal Theodore McCarrick, a former archbishop of Washington D.C. and one of the most prominent Catholic leaders in the US.

The pontiff ordered the former cardinal to "remain in a house yet to be indicated to him, for a life of prayer and penance until the accusations made against him are examined in a regular canonical trial," a Vatican statement said.

McCarrick, 88, stepped down from public ministry last month as he faced allegations of sexual abuse of a 16-year-old boy almost fifty years ago, when he was serving as a priest of the New York archdiocese. When the claims surfaced, the priest cited "absolutely no recollection of this reported abuse." However, last month, American Church officials found the allegations credible and substantiated.

© CC0
Catholic Church Relies on 'Secrecy and Resistance' to Scare Sex Abuse Victims
McCarrick is said to have become the first cardinal to resign from the College of Cardinals, the highest governing body of the Roman Catholic Church that advises the pope and elects new popes, in almost 90 years. In 1927, French cardinal Louis Billot resigned from this status over a dispute with Pope Pius XI.

The high-profile resignation comes at a time when the Roman Catholic Church is being sucked into a sex abuse scandal in Latin America. In May, all Chilean Catholic bishops resigned amid a scandal ignited by reports that the Bishop of Osorno, Juan Barros, had known about and covered up abuses of minors by priest Fernando Karadima.

Rocked by the news, Chile launched a massive investigation into 158 members of the national Roman Catholic Church. The probe included reports of cover-up cases and abuse of 266 victims, including 178 minors, with some cases dating as far back as 1960.