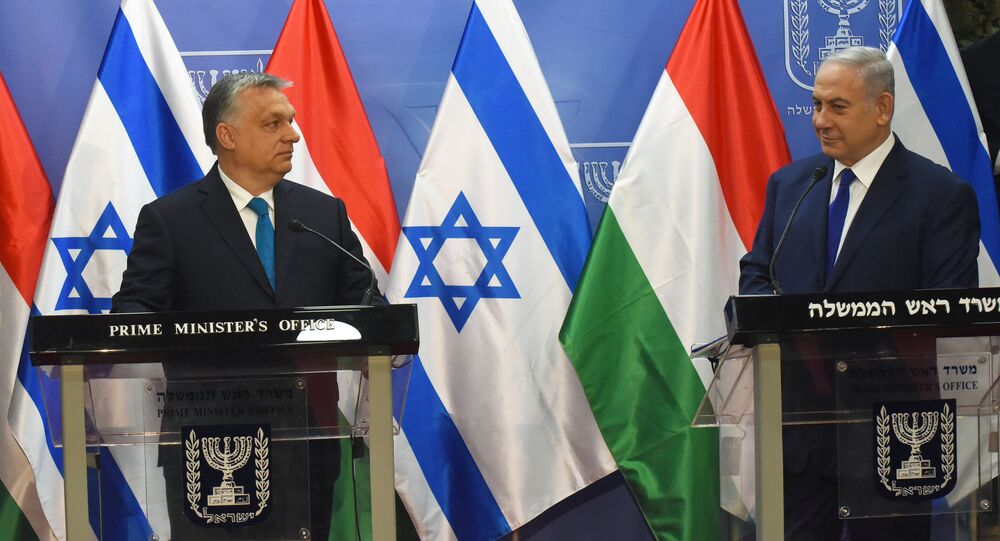 Since the refugee crisis broke out in Europe in 2015, Hungarian Prime Minister Viktor Orban has been pursuing a tough line toward migrants, something that was a major part of his election campaign and remains one of the main topics in his current political agenda.

Speaking at a press conference after talks with his Israeli counterpart Benjamin Netanyahu in Jerusalem on Thursday, Hungarian Prime Minister Viktor Orban specifically applauded what he touted as "excellent ties" between the two countries.

"I think that happens because both countries have a patriotic leader. And in this relationship between us I see evidence for the fact that a Hungarian patriot and a Jewish-Israeli patriot always find a common denominator between them," Orban stressed.

READ MORE: Anti-Semitism 'Morphs and Manifests From Many Aspects of Life' in US – Rabbi

He also pointed out the two's common stance on "the challenges of the 21st century," including the migration crisis and terrorism.

"There is full agreement between us that security is the most important thing. Every nation has the right to defend its citizens. It's our duty to provide our citizens with a sense of security," Orban noted.

On anti-Semitism, he said that the problem persists in Western Europe but decreases in the continent's east and that Budapest is ready to cooperate with Israel on the fight against Jew-hatred.

"In Hungary there is zero tolerance for any form of anti-Semitism. Every Hungarian Jew is protected by the government" and can "openly and proudly celebrate their Jewish heritage and feel secure," Orban underscored, touting the Hungarian government's efforts to promote Jewish culture.

Netanyahu, for his part, praised Orban's support for Israel's stance during international forums and applauded their bilateral understanding of "the real threat of radical Islam" which Netanyahu said "can endanger Europe, us and our Arab neighbors."

© REUTERS / Peter Nicholls
Israeli Labor Party Suspends Relations With Corbyn, Claims He Sanctions Anti-Semitism
Orban's remarks came after a study released by the Technical University of Berlin (TU Berlin)  revealed that Jews and Israelis are now most frequently threatened through the Internet, where anti-Semitic attacks and insults are becoming "more hateful and more radical."

Addressing the results of the study, Monika Schwarz-Friesel, head of TU Berlin's Institute for Language and Communication, warned that if the trend of anti-Semitic bullying through the Internet continues, "anti-Semitism will become more normal in real life, not just online."