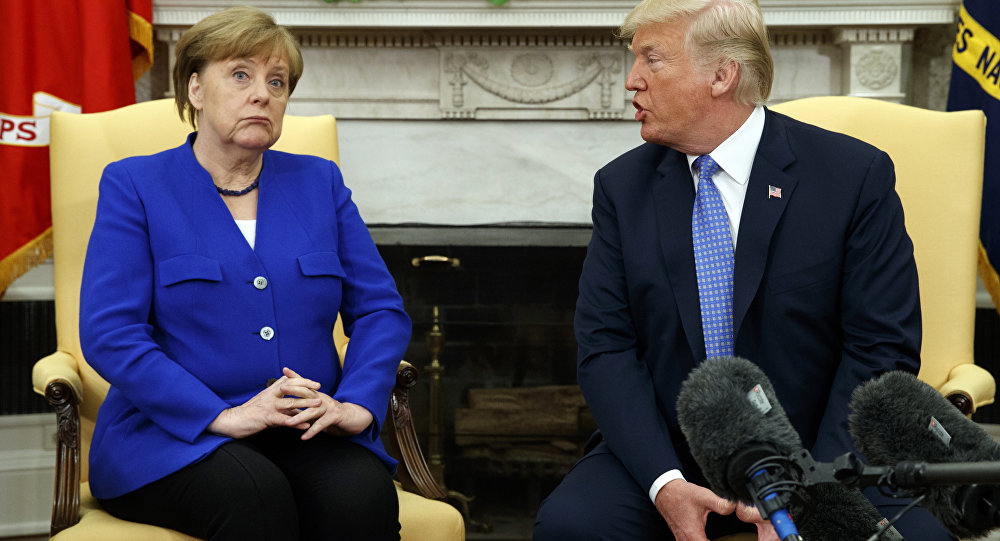 German Chancellor Angela Merkel has commented on the recent developments around the Iran nuclear deal in light of the recent US withdrawal from it.

.German Chancellor Angela Merkel has revealed that the European Union has been experiencing discord in the union's relations with the US after the latter withdrew from the Joint Comprehensive Plan of Action (JCPOA), speaking at a congress of the Confederation of German Trade Unions (DGB).

After months-long warnings, US President Donald Trump recently fulfilled his presidential campaign promise, announcing that Washington would withdraw from the JCPOA, also called the Iran nuclear deal, and vowed to re-impose economic sanctions against Tehran

The move was taken despite the fact that the International Atomic Energy Agency (IAEA), the international nuclear watchdog, has repeatedly confirmed Tehran's compliance with the nuclear deal.

© Sputnik / Vladimir Fedorenko
UK's Johnson: Regime Change in Iran Is 'Not the Goal We Should Be Pursuing'
Last week Washington urged what it called "responsible" countries around the world to use more pressure on Iran to halt its "destabilizing activities in the Middle East," since the "Iranian regime's reckless actions pose a severe threat to regional peace and security."

READ MORE: UK's Johnson: Regime Change in Iran Is 'Not the Goal We Should Be Pursuing'

The other signatories of the agreement, namely China, Germany, France, Russia and the United Kingdom, haven't followed Trump's stance, but rather expressed their commitment to the deal, saying that they consider the accord vital.

The agreement, considered to be Barack Obama's diplomatic victory, was signed on July 14, 2015, and specified the gradual lifting of anti-Iranian sanctions in exchange for Tehran curbing its nuclear program and allowing inspections to ensure that the nature of the program is peaceful.