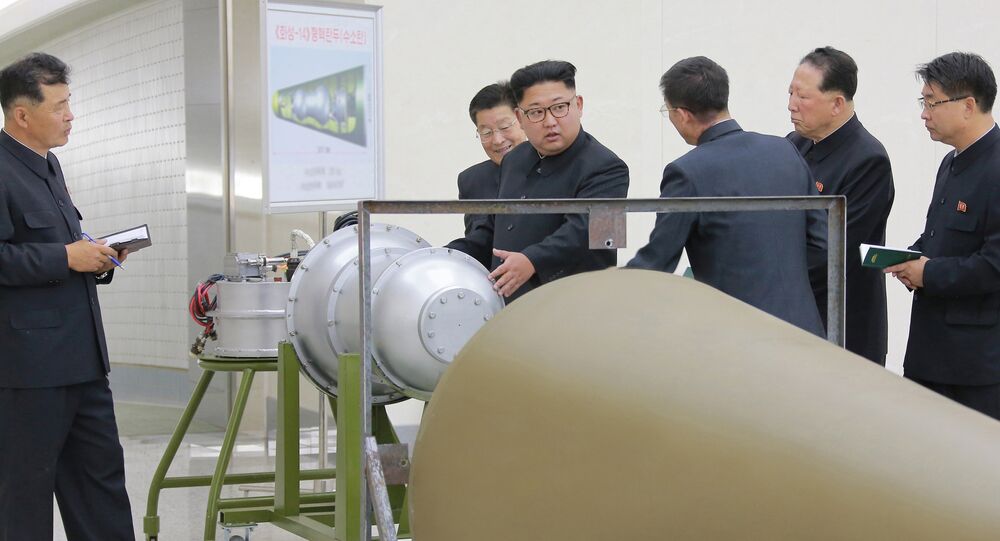 "It was the US that forced North Korea to create a hydrogen bomb," the head of the North Korean delegation at International Parliamentary Union (IPU) summit said on October 16.

According to the deputy speaker of the North Korean parliament Ahn Dong Chun, North Korean official, Pyongyang will continue to expand it nuclear arsenal as long as a "threat from the US" remains.

"The DPRK will never discuss its right to nuclear weapons while the United States maintains its nuclear threat and militant policy towards North Korea."

Pyongyang has conducted several attempts to launch a hydrogen bomb with many of them failing. On September 3, North Korea announced it conducted its most powerful nuclear test of an advanced hydrogen bomb for a long-range missile.

© AP Photo / Ahn Young-joon
N Korea Rationalizes Nukes and Missiles as Way to Protect Itself From US Destruction
The nuclear test prompted international condemnation. US President Donald Trump called Pyongyang's actions "hostile and dangerous" and reaffirmed the US readiness to protect the US and its allies by "using the full range of diplomatic, conventional and nuclear capabilities at our disposal."

In response to the North Korean H-bomb test, the UN Security Council unanimously voted in favor of the US-drafted resolution further toughening sanctions against Pyongyang. The DPRK vowed retaliation for the "hostile" move and for the first time revealed a plot to stike the US territory of Guam in case of a "provocation." The US leader responded to the threat promising to unleash "fire and fury" if Pyongyang does not stop its "threats to the US."

On October 13, North Korea renewed its promise to strike Guam one day after stating that it will complete its nuclear weapons program no matter how much international pressure the nation faces.