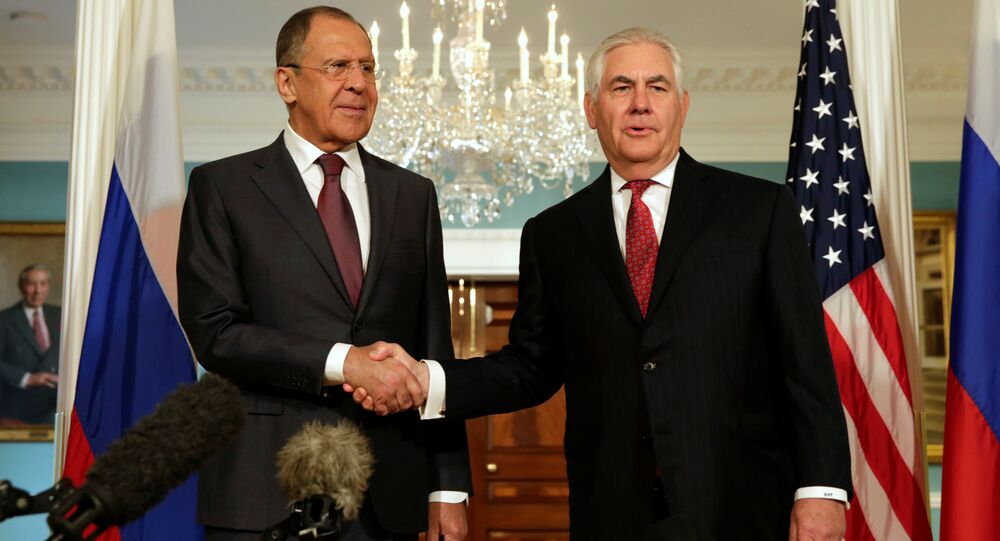 In the light of daunting modern events, it is extremely important for Russia and the US, both permanent members of the UN Security Council, to coordinate their standpoints on many political issues, especially on the threshold of the 72nd session of the UN General Assembly.

MOSCOW (Sputnik) – US Secretary of State Rex Tillerson and Russian Foreign Minister Sergey Lavrov met on Sunday in the Russian mission to the United Nations in New York. Politicians arrived in New York in order to take part in the 72nd session of the UN General Assembly, which will take place on September 19 – 25.

During an informal meeting, the US Secretary of State and his Russian counterpart discussed the situation in Syria as well as the implementation of the Minsk agreements on the settlement of the conflict in the eastern Ukrainian region of Donbass, according to the Russian Foreign Ministry’s spokeswoman Maria Zakharova.

US State Department spokesperson Heather Nauert stated that Tillerson and Lavrov reaffirmed their commitment to reducing violence in Syria and creating conditions for achieving progress in the Geneva peace process.

“US Secretary of State Rex Tillerson and Russian Foreign Minister Sergey Lavrov met this evening in New York on the sidelines of the United Nations General Assembly. The two recommitted to deconflicting military operations in Syria, reducing the violence, and creating the conditions for the Geneva process to move forward, pursuant to United Nations Security Council Resolution 2254,” the statement issued on late Sunday said.

© REUTERS / Steffen Kugler/Courtesy of Bundesregierung
World Cannot Afford US, Russia Being at Odds - UN Secretary-General
The Syrian crisis was also the highlight of the phone conversation between Lavrov and Tillerson on Saturday, when politicians discussed the implementation of the decisions made at the sixth round of the Astana talks on Syrian reconciliation.

Russian-US relations have deteriorated significantly within last several months over US allegations that Russia meddled in the 2016 presidential election as well as over the US decision to impose new sanctions on Russia and the row over Russian diplomatic property in the United States. However, in the international arena, in order to forge peace and build a fair world order, it is crucial to maintain contact and promote mutual understanding despite all the difficulties which may cast a shadow on bilateral relations.