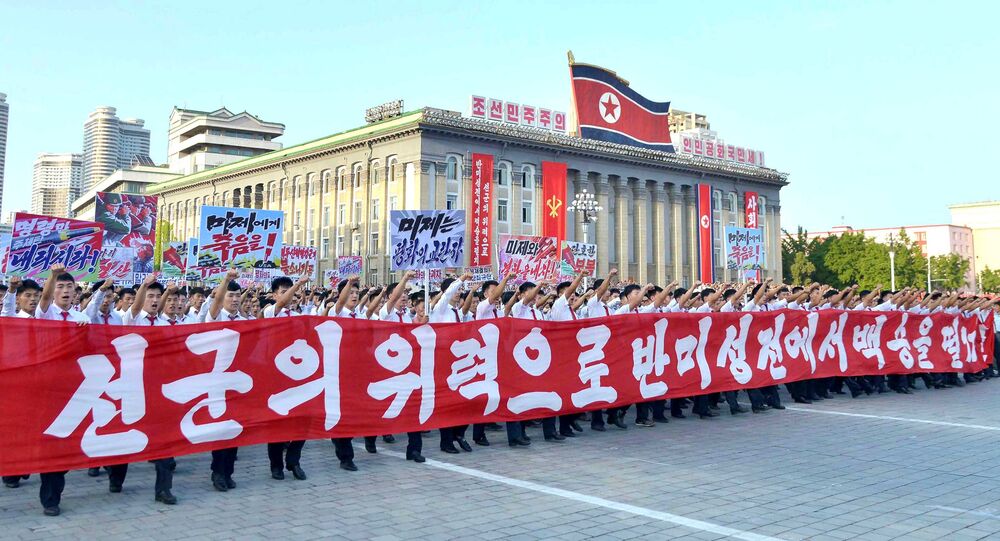 The US' military threats and declarations that "all options are on the table" in dealing with North Korea are highly dangerous, ," Dr. Adam Broinowski, a post-doctoral research fellow at Australian National University, told Radio Sputnik.

The tough new measures ban North Korean exports of coal, iron, iron ore, lead, lead ore and seafood. These lucrative exports are worth over a billion dollars and accounted for one-third of North Korea's total exports in 2016.

The latest UN resolution is the eighth round of punitive measures against North Korea since 2006, when Pyongyang conducted its first nuclear test. To date it has carried out a total of five nuclear tests, most recently in September 2016.

Slashing exports by a third, the sanctions "would be pretty drastic for any economy, let alone one that is so isolated from international trade in the first place," Dr. Adam Broinowski, a post-doctoral research fellow at Australian National University, told Radio Sputnik.

© AFP 2021 / JUNG Yeon-Je
US Should ‘Tolerate’ N Korea Nukes to Avoid War - Ex-Security Advisor Susan Rice
Banning exports such as coal, lead and seafood, and restricting overseas laborers, "would seem to me to be going beyond what is necessary to have a narrowly targeted, focused sanctions program on the North Korean nuclear weapons and ballistic missile program."

On Saturday, US national security adviser H.R. McMaster said that the US is preparing "all options" to counter North Korea, including launching a "preventive war … that would prevent North Korea from threatening the United States with a nuclear weapon."

Broinowski said that "there is certainly more activity going on" from the US in relation to preparations for a war with North Korea, including the CIA's establishment of an intelligence center in South Korea.

"The US and its allies, particularly South Korea, has been planning a strategy of decapitation on the North Korean leadership for many years now."

"The allusion to a 'preventive war' is a little bit misleading, if not illogical, in the sense that if you conduct a decapitation strike on the North Korean leadership, it would involve weeks and weeks of strikes on nuclear weapons silos and bunkers holding ballistic missiles that would potentially be done with nuclear weapons and you would have retaliation from the North Korean forces."

© AP Photo / Lee Jin-man
Trump 'Sinks to Same Level as Kim Jong-un' With Reckless 'Fire and Fury' Threat
"So, it defies logic to say that you're preventing North Korean nuclear weapons by saying that you're conducting a nuclear war or something that could escalate to a regional war involving nuclear weapons," Broinowski said.

The US declaration that "all options are on the table," in its dealings with North Korea is a "highly dangerous" strategy that could lead to a regional war.

"This kind of escalation in threats is not a good sign for relations between China and Russia on the one hand, and the US on the other. Unfortunately, it seems to be a deliberate action on the part of the US leadership to organize 'flashpoints, or 'hotspots' of tension and confrontation. Hopefully, that's not the case."