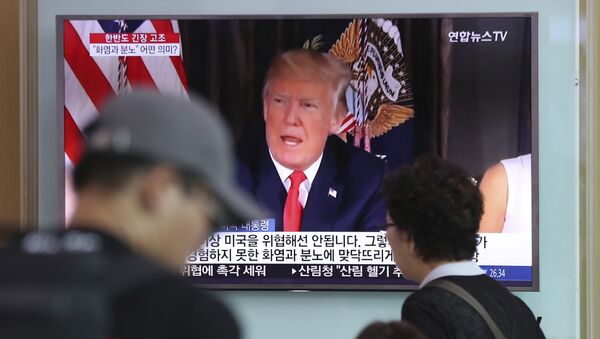 US President Donald Trump's declaration that he will respond to North Korea with "fire and fury" has sparked fears of a military confrontation between the two countries, whose leaders have been engaged in a war of words since January.

After North Korean leader Kim Jong-un said during his annual New Year's address that preparations for launching an intercontinental ballistic missile have "reached the final stage," Trump hit back immediately.

"North Korea just stated that it is in the final stages of developing a nuclear weapon capable of reaching parts of the U.S. It won't happen!" the president-elect tweeted in response.

China has been taking out massive amounts of money & wealth from the U.S. in totally one-sided trade, but won't help with North Korea. Nice!

​While Trump accuses China of not doing enough to reign in North Korea, Beijing has maintained that it can't do any more than it is already doing: calling on Pyongyang to respect UN Security Council resolutions banning its nuclear and ballistic missile tests, and implementing associated sanctions.

Trump has continued to talk tough on the North Korea issue, as Pyongyang has carried out more nuclear and ballistic missile tests. It has carried out a total of five nuclear tests, most recently in September 2016.

After North Korea's failed medium-range ballistic missile test on April 16, Trump warned, "There is a chance that we could end up having a major, major conflict with North Korea. Absolutely."

Earlier, he announced he had sent an "armada" of ships led by the aircraft carrier USS Carl Vinson to the Korean Peninsula.

In a further escalation of tension, on Tuesday Trump warned that "North Korea best not make any more threats to the United States. They will be met with fire and fury like the world has never seen… he has been very threatening beyond a normal state. They will be met with fire, fury and frankly power the likes of which this world has never seen before."

North Korea responded by threatening to attack the US island territory of Guam, in the Western Pacific Ocean, with its ballistic missiles.

"What Trump said just now is certainly a mistake. For a president, in any situation, let alone the head of a nuclear superpower, to speak out like that – he sank to the level of Kim Jong-un."

Vorontsov added that the North Korean leader makes such statements out of political necessity, while Trump's are the result of an emotional outburst. Whipping up such an atmosphere can lead to fatal mistakes.

"When nerves are at breaking point, when the emotions are off the scale, then some dot on the computer screen may seem like a rocket, but in fact it isn't really a rocket. And on the front, it might seem like a shot was fired. There is a greater probability of rapid escalation," he cautioned.

Asia
Chain Reaction: Seoul Getting Nukes 'Would Put Pressure on Japan to Follow Suit'
"In the current situation, there won't be time to dismount. The North Koreans are already expecting a massive strike and they are in a situation where it doesn't make sense to wait for the US to strike such a blow, because after that they might not have anything left to respond with."

"According to various estimates, there are 8-12,000 machine guns across from Seoul, you can't destroy them all in one strike. If you calculate how many shells they can fire in one minute – Seoul will be destroyed," he warned.

Trump's tough rhetoric has been criticized by US lawmakers, who fear the consequences of the US president escalating the situation. Republican senator John McCain said that Trump should not make empty threats.

"I take exception to the President's comments because you've got to be sure that you can do what you say you're going to do," the Arizona senator said in an interview with Phoenix radio station KTAR.

"The great leaders I've seen don't threaten unless they're ready to act and I'm not sure President Trump is ready to act."

North Korea Considering Targeting Guam with 'Enveloping Fire'
Political analyst Alexander Safonov told Radio Sputnik that McCain, who is the Senate Armed Services Committee Chairman, is a known "hawk" who wants Trump to back up the rhetoric with more action.

"McCain and his supporters are known for being extremely hard and insisting on the toughest response to Russia, Iran and North Korea. As I understand, McCain's criticism of Donald Trump is that despite Tramp's numerous promises to influence North Korea in one way or another, he hasn't had any meaningful results. North Korea continues its missile tests."

"McCain and his associates insist that Trump take more effective steps. The issue is, that there are not many oportunities to do this. There needs to be an agreement with China. China, in turn, has many interests on the Korean peninsula and they certainly do not always intersect with the American ones. Therefore, Trump has again ended up in a rather difficult situation, in which he is under the fire not only from the Democratic Party, but from many members of the Republican Party."