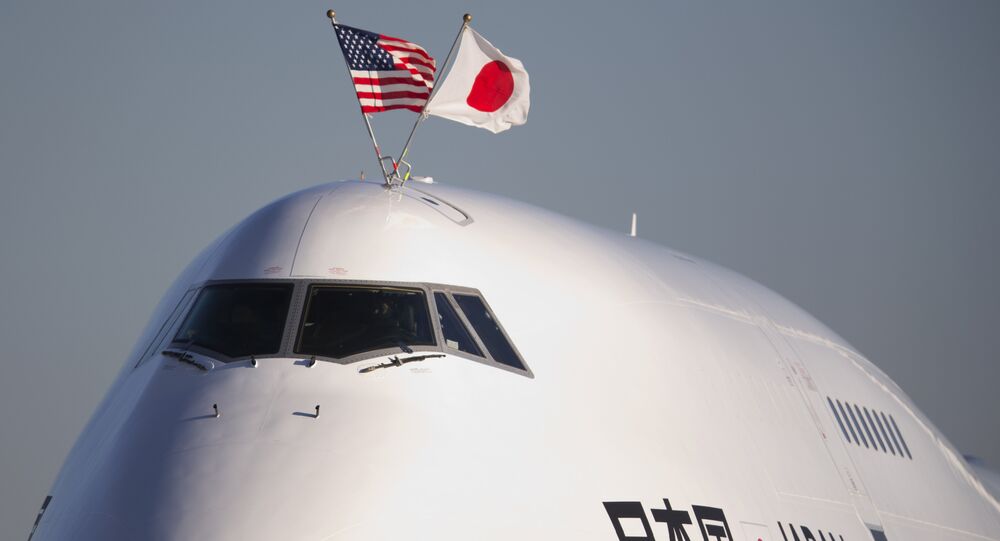 Japanese Prime Minister Shinzo Abe has reportedly not ruled out that during US Vice President Michael Pence's upcoming visit to Japan, the country's Finance Minister Taro Aso and Pence may discuss a proposed bilateral trade agreement in the wake of Washington's withdrawal from the Trans-Pacific Partnership (TTP).

© AFP 2020 / TOSHIFUMI KITAMURA
No Thanks: China 'Would Get Indigestion' From Involvement in Failed TPP Project
On April 17, US Vice President Michael Pence is expected to pay an official visit to Japan and take part in the first round of consultations on developing bilateral economic ties.

For his part, Japanese Prime Minister Shinzo Abe did not rule out that during Pence's visit, he and Japan's Finance Minister Taro Aso may focus on clinching a possible bilateral trade agreement in the wake of the White House's move to leave the Trans-Pacific Partnership (TTP).

In late January 2017, newly-inaugurated US President Donald Trump signed an executive order to withdraw from the negotiating process of the TTP.

During his election campaign last year, Trump pledged to abandon the Trans-Pacific Partnership, which he called "a potential disaster" for the US.

Instead, he signaled readiness to negotiate "fair, bilateral trade deals that will bring jobs and industry back onto American shores."

With the Trans-Pacific Partnership (TPP) off the table, here's how the US and Japan can rethink bilateral trade. https://t.co/0UCzAo36hU pic.twitter.com/QtbaGbtJfE

In an interview with Sputnik Japan, former Russian Ambassador to Japan Alexander Panov said that "Tokyo hoped to restart its economy with the help of the TTP, but this lever has already disappeared."

"The Japanese are bracing for the worst and Abe's visit to the US, during which the Japanese PM in every possible way coaxed the US President, clearly indicated it. First of all, Japan will continue to invest in the US economy even on a much larger scale [than before]. The Japanese have all chances to get involved in the construction of high-speed railroads in the United States," Panov said.

© REUTERS / Hyungwon Kang
US Pivot Away From Asia? Impact of TPP's Demise on China, Japan and Regional Security
Russian expert on Japan Yelena Leontieva, for her part, said that the goal of Trump's policy is to stop the US from taking part in the development of the Asia-Pacific region, the most dynamic zone in the world in terms of regional integration.

This is something that Leontyeva said runs counter to the goals pursued by potential TTP member countries.

Meanwhile, many experts agree that the US withdrawal from the TTP will prevent US economic dominance in the Asia-Pacific region, according to Sputnik Japan columnist Tatyana Khlon.

She said that if the US remained a TTP member, the TTP would remove for Washington thousands of import duties imposed by countries with rapidly developing economies, including Malaysia and Vietnam.

The possible collapse of the TTP in the longer term may encourage the Asia-Pacific countries to conclude free trade agreements that will be in sync with the format of the Comprehensive Regional Economic Partnership.

As a result, the world will see a major regional trading bloc, which will comprise such powerhouses as China and Japan, Khlon said, adding that it is Beijing, not Washington, that will call the shots in the new organization.