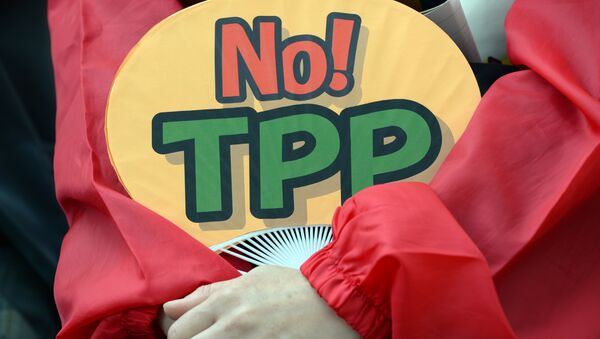 China would be better off cultivating its own trade agreements, rather than accepting an invitation to join TPP after the US departure from the free trade deal, Chen Fengying of the Chinese Institute of Contemporary International Relations told Sputnik.

Latin America Could Turn to Russia, China in Wake of Trade Split With US
Some signatories to the Trans-Pacific Partnership (TPP) are keen to recast it with Chinese involvement following Donald Trump's decision to pull out of the free trade agreement.

However, it is by no means certain that China will want to resurrect TPP, given the existence of alternatives such as the Regional Comprehensive Economic Partnership (RCEP), a free trade agreement currently being negotiated by 16 states in East Asia and Australasia, Chen Fengying of the Chinese Institute of Contemporary International Relations told Sputnik.

"The TPP was not created to China's taste. For China, joining the TPP is not worth it. Perhaps, it won't be able to digest this concept and in the end it will have to spit it out. Other countries have already discussed the conditions of entering into partnership and a lot of these conditions won't be beneficial for China. It's the equivalent of eating something that doesn't suit you and getting indigestion," Fengying said.

"China would be better off developing confidence in its own power and developing its own conceptions of trade deals, for example the RCEP and similar deals. China needs to promote multinational and bilateral co-operation simultaneously. By multilateral interaction, I mean co-operation within the framework of organizations such as the WTO, IMF and World Bank."

"If you look at the other side of regional trade agreements, you can say that they bind together countries with different directions and development aims. The TPP is this kind of agreement, the negotiation process within the framework of this kind of partnership is very difficult," Fengying said.

It's High Time for China to Take Washington's Vacant Seat in TPP
In a speech to the Davos World Economic Forum last month, Chinese President Xi Jinping outlined plans to expand the RCEP. The agreement is currently under negotiation between the ten member states of the Association of Southeast Asian Nations (ASEAN), and six states which are currently free trade partners of ASEAN (Australia, China, India, Japan, South Korea and New Zealand).

Although it was uncertain whether the deal would have been ratified by the US Congress, Trump's move killed off the controversial proposal, which had 12 signatories and aimed to create the world's largest free trade area, accounting for roughly 40 percent of global GDP.

However, the deal was the subject of protests in the US and other countries such as New Zealand, as people feared that reducing trade barriers would have a negative effect on jobs in developed countries, and that regulatory changes would leave public institutions vulnerable to legal action from multinational corporations and intensify the privatization of public services such as healthcare.