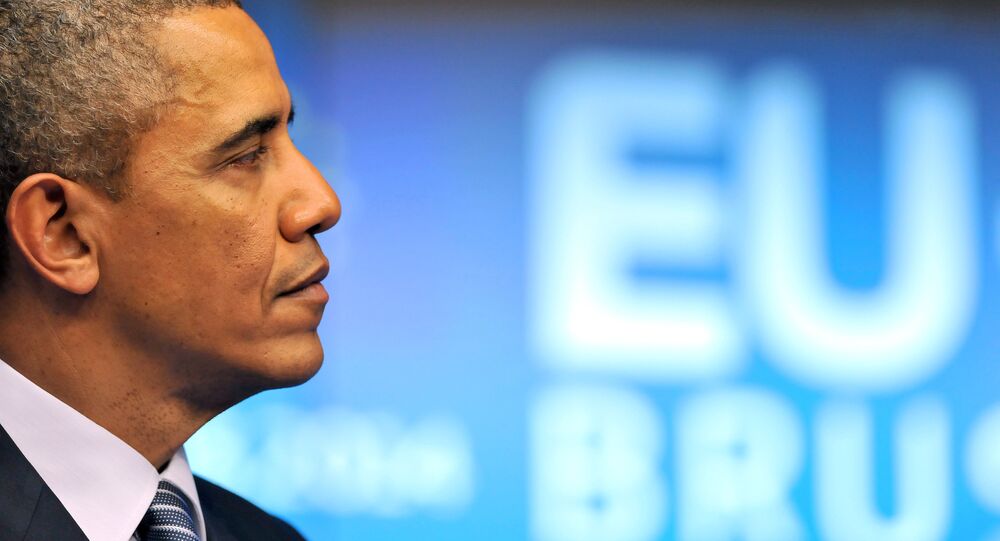 Outright Fiasco: How the West's Economic Weapon is Failing Against Russia

The US has long relied on financial sanctions as a preferred weapon against its adversaries. However, in Russia's case, it turned out to be an “outright failure” and the West should admit this. Let’s have a look why.

© Flickr / Stephen Melkisethian
US Congressmen Propose Bill to Bind Crimea Status to Anti-Russian Sanctions
Washington’s favorite economic power tool has been so overused, it’s becoming ineffective and, in some cases, even counterproductive, reads an article in Foreign Affairs, the influential journal published by the US Council on Foreign Relations.

It refers to a report which was recently published by the Cato Institute, a libertarian-leaning US think tank, and the Center for a New American Security (CNAS) which has raised questions about how effective sanctions actually are — and shows mounting evidence of their negative ripple effect.

“Sanctions are often the tool to which US policymakers turn first in responding to crises and managing threats on an ongoing basis,” says the 78-page research publication “The New Tools of Economic Warfare”.

“But as rapidly as the tools themselves have evolved, the framework for determining their effects, for evaluating their effectiveness, and for minimizing unintended consequences has lagged behind.”

The paper reviews the “negative effects that have emerged from the policy and enforcement landscape in the last several years.”

“Phenomena like de-risking and efforts by countries like Russia and China to develop alternatives to the US dollar-denominated foundations of the international financial system remind us that the size, liquidity, and integrity of the US financial system are among the United States’ most important strategic assets, including in the deployment of sanctions.”

© REUTERS / Charles Platiau
Breaking Free: 'US Pressure on France to Keep Anti-Russian Sanctions' Doesn’t Work Anymore
With reference to Russia, the article says, the sanctions should be judged by the “most relevant metric —whether they are producing a policy change.”

“They have been an outright failure,” it states, quoting the earlier review by Emma Ashford, a Visiting Research Fellow at the Cato Institute.

Her view is echoed by Italian lawmaker Deborah Bergamini:

“Sanctions have been a success? No. It’s a true failure,” she recently stated.

In the meantime, the measures are harming US economic and geopolitical interests and carry major economic and political costs for the United States and its European allies, Ashford adds.

The Negative Effect for Europe

“The brunt is being borne by Europe, where the European Commission has estimated that the sanctions cut growth by 0.3 percent of GDP in 2015.”

© REUTERS / Philippe Wojazer
Paris to Suffer 'Worst Backlash' if Neglects Vote to Lift Anti-Russia Sanctions
According to the Austrian Institute of Economic Research, continuing the sanctions on Russia could cost more than 92 billion euros, ($104 billion), in export revenue and more than 2.2 million jobs over the next few years.

Meanwhile, a number of European banks, including Société Générale in France and Raiffeisen Zentralbank in Austria, have made large loans to Russian companies, raising the worrying possibility that the banks may become unstable, or even require bailouts if the borrowers default.

Italy has lost at least 1.25 billion euros in exports since US and European Union sanctions were imposed in 2014.

The Negative Effect for the US

In the United States, banks are taking much of the impact, Ashford continues.

US financial institutions have been required by law to freeze and manage tens of millions of dollars in assets held by sanctioned individuals.

© Sputnik / Natalia Seliverstova
'West Doesn't Understand Moscow': German Media Figures Out Why Anti-Russian Sanctions Don't Work
As a result, the author says, the banks have had to hire additional legal and technical staff to not only monitor their own accounts but also review any financing arrangements with Russian entities.

Failure to comply with the sanctions can be extremely costly: just one error, such as processing a single payment from an interdicted individual, can carry a penalty of up to $250,000, and the penalties can quickly multiply.

She cites as an example the Dutch bank ABN AMRO, which  was fined $500 million in 2010 for violating US sanctions against Cuba, Iran, Libya, and Sudan.

US energy companies, for their part, have had to abandon various joint ventures in Russia, losing access to billions of dollars in investment.

Thanks to prohibitions on the provision of technology and services to Russian companies, Western firms have been kept out of unconventional drilling projects in the Arctic and elsewhere.

ExxonMobil, for example, has been forced to withdraw from all ten of its joint ventures with Rosneft, including a $3.2 billion project in the Kara Sea.

© Sputnik / Nikolay Hiznyak
Nearly Two Years Into Sanctions: 'Yes, Russia Can Live Without Europe'
Because that project was in its early stages, the cancellation will not cost ExxonMobil in immediate profits.

But it will cut access to upstream development projects inside Russia, putting the company’s future profits and stock valuation at risk and raising the possibility that the money already invested will be permanently lost.

“The sanctions have also encouraged Russia to create its own financial institutions, which, in the long run, will chip away at the United States’ economic influence,” the author says.

After US senators and some European governments suggested that the US might cut off Russia’s access to the Society for Worldwide Interbank Financial Telecommunication (SWIFT) payment system, the Russian Central Bank announced that it was going to start negotiations with the other BRICS states—Brazil, India, China, and South Africa—to create an alternative.

To lessen its dependence on Visa and MasterCard, Russia has made moves toward setting up its own credit-card clearing-house.

And it has moved ahead with the proposed BRICS development bank, which is designed to replicate the functions of the World Bank and the International Monetary Fund.

“It is difficult to accept when a policy does not work. To its credit, the Obama administration has done so in Cuba, by resuming diplomatic relations, and in Iran, by choosing to negotiate. It is time to admit failure in Russia, too,” the author finally states.

Greece to Act Against Anti-Russian Sanctions But Not Use Veto