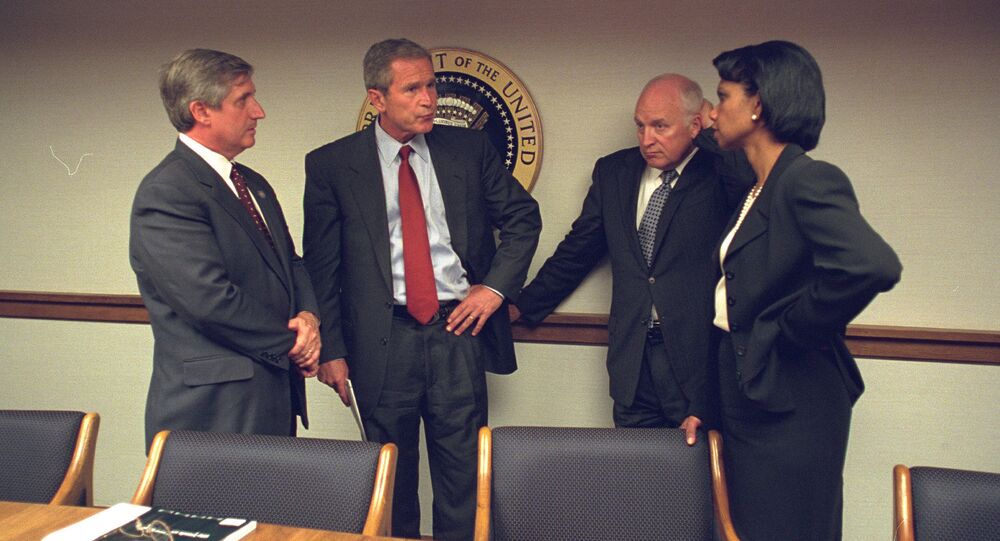 ‘If you tried Bush and Cheney before a jury of Iraq War veterans I would be very sure that they would get a guilty verdict.’

​On March 20, 2003, the Bush administration led the US and a “coalition of the willing” to invade Iraq, based on false claims, including manufactured evidence that Saddam Hussein had stockpiles of weapons of mass destruction with designs to use them, that Iraq’s Baathist regime was in league with al Qaeda and shared responsibility for the 9/11 World Trade Center attacks, and that US troops would “liberate the Iraqi people” from the depths of dictatorship.

The illegitimate war led to over one million Iraqi deaths and the deaths of some 4,486 US soldiers. The 2nd Bush administration’s Iraq invasion has lasting ramifications throughout the region, and domestically, within the United States as well. Evidence has come to light in recent months that the Daesh leaders who seized once diverse and booming northern Iraq provinces, including Mosul are, in fact, the same Iraqi military leaders that were ousted and subsequently discriminated against by US occupation forces.

Loud & Clear’s Brian Becker sat down on Tuesday with Iraq war veteran and former US Marine Michael Prysner to discuss his experiences during the war and the fallout of America’s 21st century treachery, the unprovoked and illegal invasion of Iraq.

What was your role in the invasion of Iraq?

"I was in the 174th airborne brigade that invaded the country from the north," explained Prysner. "I was on the first plane that landed in Iraq in the City of Kirkuk, where I served as a radar operator for air and artillery strikes, but I was transitioned in the chaos to other jobs, including ground surveillance and interrogation."

Was the Iraq invasion a war crime?

"Yes," said Prysner, "as somebody who went, myself, I fully support [trying] Bush, Cheney, and Rumsfeld […] for war crimes." The former Marine explained that there were hundreds of thousands of incidences of war crimes documented by an array of sources, including Iraqi and international human rights groups.

Prysner points to the faulty justifications for entering the Iraq War, including lying to the American public and the international community through the use of fake intelligence reporting.

Facebook/Democracy Spring
What CNN Doesn’t Want You to Know: #DemocracySpring Enters Second Day After 100s Arrested at US Capitol

"The invasion was an unprovoked, illegal invasion," said Prysner. "There is a body of evidence that the Bush Administration lied about the reasons for going to war and the presence of weapons of mass destruction."

How many people died during the Iraq war?

Prysner detailed the US death toll from the Iraq at 4,486 US soldiers. International surveys from medical journals such as the Lancet put the Iraqi estimated Iraqi death toll at over one million. "1 in 3 Iraqis were either killed, wounded or displaced by the US occupation and such a massive catastrophe requires that somebody be held accountable."

What were you told, what was the motivation, and did you initially support the war?

Prysner explained that, as a young man, he bought into the Bush administration’s narrative that Saddam Hussein had a stockpile of weapons of mass destruction and a "fear of an imminent attack by somebody who was dead-set on harming us and our families." These falsified statements  were something that commanders “pounded into our head,” he said.

The former Marine said that commanding officers claimed connections between Iraq and al Qaeda’s attacks in 9/11, along with notions spouted by politicians that "the Iraqi society was going to be liberated and would greet us with flowers."

Prysner further detailed that "within the ranks there was a lot of mistrust of George W. Bush and whether the WMD thing was real, but it was the idea of helping the Iraqi people that I was going into the war thinking about so I supported it and I volunteered to go."

Nonetheless, the former Marine says that the hoax wore off, for him and others, after they saw the suffering caused by the invasion and occupation.

"It only took months to see that everything the Bush administration had been telling us was false and that the idea that we’d be doing something good for the Iraqi people was especially false."

What happened to the people after the invasion?

Prysner explained the US-led process of ‘de-Ba’ath-ification,’ the systematic purging and subsequent persecution of all members of the Iraqi civil society who, in order to attain those jobs had had to swear allegiance to Iraq’s ruling Ba’ath Party.

"School teachers were the hardest hit, with over 40,000 school teachers immediately kicked out of their jobs," said Prysner. The ousters pervaded all parts of the Iraqi civil society, not only teachers. "150,000 people who weren’t party elites in the bureaucracy of the Baath party – administrators, health professionals, people who operate electricity, water and public transportation were completely eliminated."

Prysner elaborated that not only were these people removed from their positions, but this "entire sector of the population was told that you will have no role in Iraq’s future and were disqualified from future public employment."

It wasn’t just public servants, as the military were purged wholesale when the US took control. Some 700,000 Iraqi military service members were kicked to the curb.

"The US went in and established a new dictatorship, fired 1 million people and tossed aside their families, so it is ludicrous to think that today the crisis that we are seeing with Daesh in Iraq can be divorced from that," said Prysner.

Did the persecution of the Sunni Ba’athist party and the subsequent power vacuum create Daesh in Iraq?

Becker explained that "the northern part of Iraq is now under control of Daesh including the once multiethnic area of Mosul," calling it a "great irony" that, under the guise of saving Iraq from the dictatorship of Hussein, a secular leader, the US policy of un-employing and targeting secular Ba’athists, led to the rise of a theocratic terrorist group now led by former members of the Iraqi army that the US disbanded in 2003.

Prysner concurred, saying, "if you tried Bush and Cheney before a jury of Iraq War veterans then you would get a guilty verdict for war crimes." Prysner is particularly appalled by the Bush administration’s profiteering motives that endangered millions of Iraqis and hundreds of thousands of Americans.

© AP Photo / Mohamed Salama
Obama Going All Lengths, Ready to Military Action Against All Threats ‘Even in Libya’

"Today, it is infuriating to see the blatant connection between all the members of the Bush administration and all of those who wanted to profit from Iraq – the energy companies, oil companies, defense contractors – who were friends, who worked for the administration, and who all sat on the same boards, when you see this inner-circle of super rich millionaires deciding the fate of millions behind closed doors while they all made out well," said Prysner.

Trump Kids Miss Voter Deadline, So Did Millions of Other New Yorkers