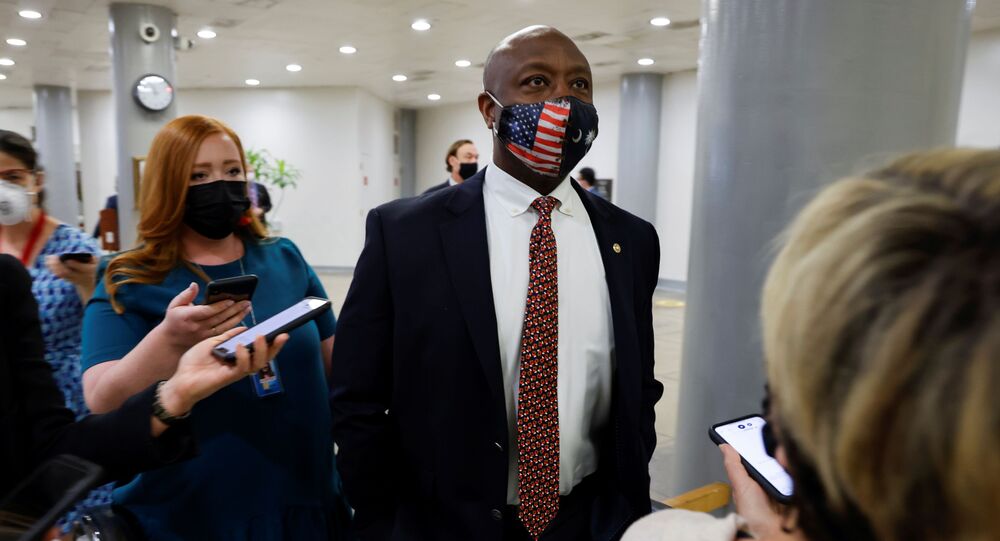 The phrase "Uncle Tom," derived from the lead character in Harriet Beecher Stowe's abolitionist novel Uncle Tom's Cabin, is a racial epithet that is traditionally used to describe a Black person in the US who is excessively subservient to white people, and overly seeks their approval.

Twitter confirmed in a Thursday statement that the social media platform had to intervene and block the trending phrase "Uncle Tim" - a play on "Uncle Tom" - after Sen. Tim Scott (R-SC) delivered a rebuttal to US President Joe Biden's address to a joint congressional session.

Scott is the first Black US Senator from South Carolina, as well as the only Black Republican senator in Congress.

"I can confirm that we are blocking the phrase you referenced from appearing in Trends. This is in line with our policies on Trends," a Twitter spokesperson said to the Washington Examiner.

"We want Trends to promote healthy conversations on Twitter. This means that at times, we may not allow or may temporarily prevent content from appearing in Trends until more context is available. This includes Trends that violate The Twitter Rules."

"I get called Uncle Tom and the N-word by progressives ... I know firsthand, our healing is not finished," the Republican senator remarked Wednesday night, following Biden's address.

"Hear me clearly: America is not a racist country," he said later on. "And it’s wrong to try to use our painful past to dishonestly shut down debates in the present."

However, when Scott appeared on Fox News' "Fox & Friends" on Thursday morning, he claimed that he was the victim of race-based discrimination in present-day America.

"What they want for us is for us to stay in a little, small corner and not go against the tide that they think is America. Their America and my America aren't the same America, if, in fact, they think that discriminating is the fastest way to end discrimination," he added.

Despite the removal of the trending topic, one who searches "Uncle Tim" on Twitter can still see the tweets, which includes a mix of posts attacking and defending the Republican senator.

On the other side of the aisle, Scott's fellow Republicans came to his defense and asserted that it was "the left" and "progressives" who were being hypocritical.

"'Uncle Tim' is trending on Twitter right now because apparently it's okay to use racist epithets as long as they're directed at a Republican," tweeted writer Eddie Zipperer.

"The fact that 'Uncle Tim' is trending on Twitter — right after Tim Scott’s speech where he pointed out that progressives often call him the N-word — tells you everything about the left’s double standards," tweeted biotech entrepreneur Vivek Ramaswamy. "'Anti-racists' turn out to be the real racists almost every time."

US Needs to Keep Lines of Communication Open With Russia to Achieve Some Stability, State Dept Says