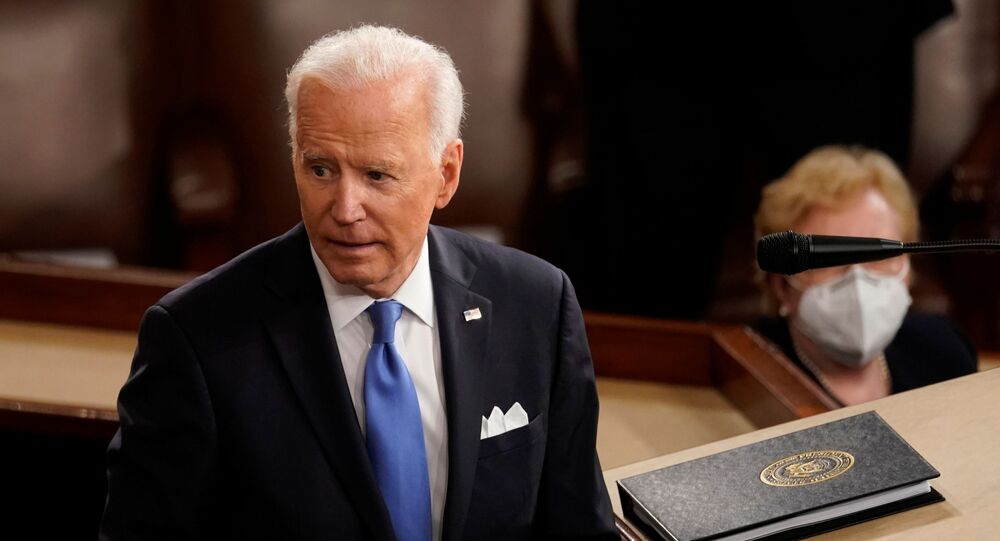 WASHINGTON (Sputnik) - US President Joe Biden in his first speech to Congress vowed to challenge China, Russia, and other "rivals" on security matters, outlined his jobs plan to revive the American economy, and called on lawmakers to pass gun control, police and immigration reform legislation.

"Now, after just 100 days, I can report to the nation: America is on the move again", said Joe Biden during his first speech to Congress.

The President said he inherited a nation in crisis, from the pandemic to the post-Capitol riot upheaval, which he described as the "worst attack on our democracy since the Civil War".

"The insurrection was an existential crisis, a test on whether our democracy could survive. And it did. But the struggle is far from over."

Here are key takeaways from his address.

Joe Biden claimed the United States seeks no escalation with Russia and believes both countries can cooperate where their interests converge.

The US President took credit for responding "in a direct and proportionate way" to Russia’s alleged interference in US elections and cyberattacks, accusations Moscow has repeatedly denied.

Biden pointed out the United States and Russia can cooperate in areas of mutual interest, just as they did by extending the New START Treaty on nuclear arms and on climate change.

In addition, Biden said he had notified Chinese President Xi Jinping that the United States will retain a strong military presence in the Indo-Pacific region:

"I also told President Xi that we will maintain a strong military presence in the Indo-Pacific just as we do with NATO in Europe - not to start conflict - but to prevent conflict."

Biden added that the United States is consulting closely with its allies to address threats ostensibly posed by Iran and North Korea's nuclear programmes through diplomacy and deterrence.

Among other "national security concerns", the president singled out white supremacy, which he described as terrorism that represents the most lethal threat to the US homeland.

According to the US President, the US economy had created more than 1.3 million new jobs during his first 100 days in office, which he claims is "more than any president on record".

Biden told Congress his $2.3 trillion American Jobs Plan to renovate US infrastructure will add millions of jobs and trillions of dollars in economic growth in the United States. The plan would expand education and child care, financed partly through higher taxes on the wealthiest Americans.

"It will crack down on America— millionaires and billionaires who cheat on their taxes."

Biden also outlined his American Families Plan, which consists of about $1 trillion in investments over a 10-year period and $800 billion in tax cuts for American families and workers. This is the second phase of the $2.3 trillion package.

The US president called on Congress to pass comprehensive immigration reform legislation.

The Biden administration is attempting to improve economic and security issues in the Northern Triangle countries that are driving hundreds of thousands of migrants to seek asylum in the United States.

US government data revealed that US southern border apprehensions soared by more than 70 percent in March. The 172,331 migrant encounters recorded represent the highest monthly total in more than two decades, with the Biden administration on pace to top the previous annual record set in 2019 of over 977,000 apprehensions.

Biden urged Congress to approve in May a police reform bill that would address the issue of racially-motivated brutality.

"Let’s get it done next month, by the first anniversary of George Floyd’s death. The country supports this reform. Congress should act," Biden said in a speech before a joint session of Congress on Wednesday evening.

Floyd, an unemployed African-American ex-convict living in Minneapolis, died while being arrested by police last May. Earlier this month, former police officer Derek Chauvin was found guilty of murder in the Floyd case.

"I don't want to become confrontational, but we need more Senate Republicans to join the overwhelming majority of Democrats and colleagues and close the loopholes in background checks for guns."

Biden called on Democrats and Republicans to find a common ground and urged them to work together in Congress to pass stricter background checks, and to ban the sale of assault rifles and high-capacity magazines.

Mass shootings, defined by Congress in 2013 as shooting incidents which leave three or more people dead, have received national media coverage in the US. Seven mass shootings in the US have resulted in more than five people being killed during the Biden administration's first 100 days in office, in the states of Texas, Colorado, Oklahoma, South Carolina, Georgia, and Indiana. While they represent a small percent of the total number of murders in the US (16,425 in 2019), mass shootings continue to grab headlines and drive the debate over gun control.

In his address, Biden called for the creation of a new health research agency that would be able to develop breakthroughs to treat disease like diabetes and cancer.

"The National Institutes of Health, the NIH - should create a similar Advanced Research Projects Agency for health to develop breakthroughs - to prevent, detect, and treat diseases like Alzheimer’s, diabetes, and cancer," Biden said.

Biden touted his administration's efforts to provide more than 200 million COVID-19 vaccine doses in the United States in his first 100 days. He said the United States will soon provide the world with vaccines once needs are met for Americans.