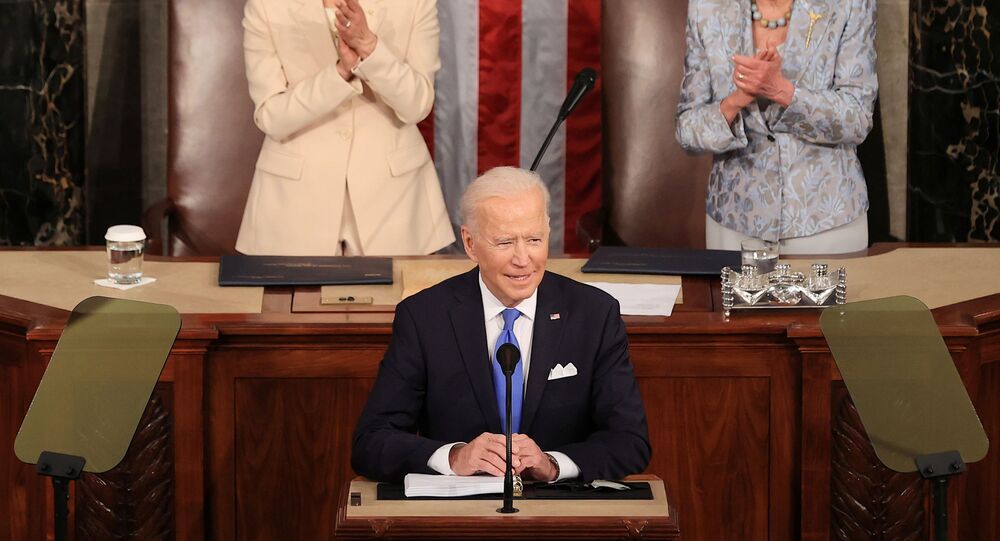 US Does Not Seek Escalation With Russia, Joe Biden Says

According to the American president, both Moscow and Washington can cooperate in fields of mutual interest, like nuclear arms and climate change.

The United States seeks no escalation with Russia and believes both countries can cooperate where their interests converge, US President Joe Biden said in an address to Congress.

"With regard to Russia, I made very clear to President Putin that while we don’t seek escalation, their actions have consequences," according to the transcript provided in advance by the White House.

He took credit for responding "in a direct and proportionate way" to Russia’s alleged interference in US elections and cyberattacks. Russia denies all allegations.

"But we can also cooperate when it’s in our mutual interests. As we did when we extended the New START Treaty on nuclear arms - and as we’re working to do on the climate crisis," Biden is poised to say.

Tensions intensified between Washington and Moscow following a US intelligence report that alleged Russian intelligence was behind last year's SolarWinds hack on US information technology systems and accused Moscow of interfering in the 2020 US election. In April, the Biden administration slapped sanctions on 32 Russian entities and individuals over these allegations and other hostile acts against US interests. Moscow has denied the accusations as lacking any evidence.

The Russian Foreign Ministry announced retaliatory measures, among which were the proportionate expulsion of US diplomatic mission staff, termination of activities in the country of US funds and NGOs controlled by the State Department and other US government agencies, and a ban for eight current and former US officials from entering Russia indefinitely, as well as an offer to Ambassador John Sullivan to travel to Washington for consultations. Sullivan left for Washington on April 22.

Meanwhile, tensions have also been high over Ukraine crisis, as the West has accused Russia of a "military build-up" on the Ukranian border. Russia has maintained that all troops movements are aimed at ensuring national security in response to NATO's own build-up near Russia's borders. Moscow has also repeatedly said it was not party to the conflict in eastern Ukraine, and stressed that Crimea's residents decided to rejoin Russia through a democratic process in compliance with international law.

Russian Foreign Minister Sergey Lavrov said in an interview with Sputnik that the Russian government will soon present a list of unfriendly countries, the criteria are clear. Commenting on the recent White House statements that anti-Russia sanctions are not designed to escalate bilateral tensions but to impose costs on Moscow for what Washington feels "are unacceptable actions by the Russian government", Lavrov warned that bilateral relations could return to a cold war-like state if the United States rejects dialogue.

He also characterized these claims as "schizophrenic notes".

The latest round of escalation also comes after Biden's interview with ABC News, in which he claimed Russian President Vladimir Putin would "pay a price" for alleged interference in the US election and called his Russian counterpart a "killer."

Putin commented on Biden's words, wishing him good health and reminding him that evaluating other people is like looking in a mirror, and invited Biden to continue the discussion online.