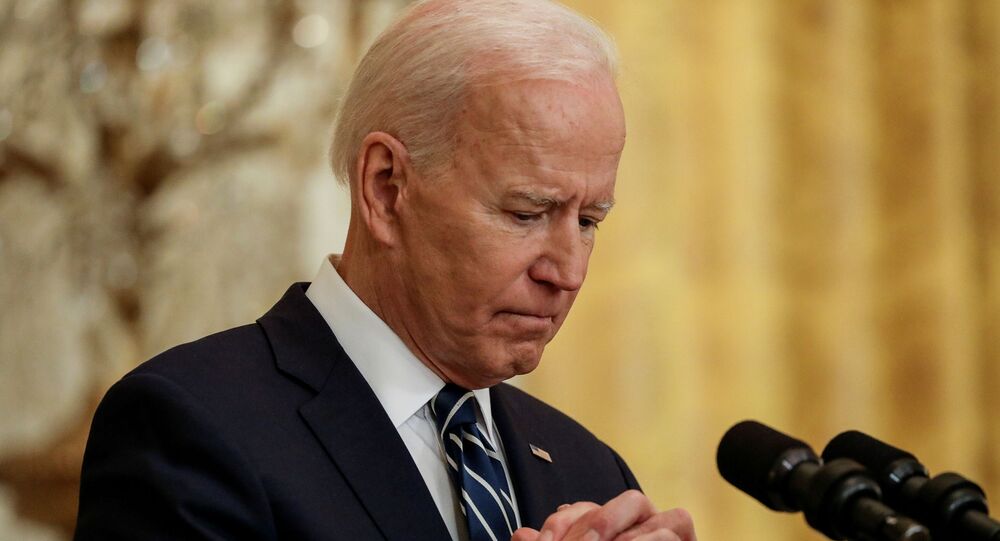 Thursday saw US President Joe Biden giving his first press conference since taking over the Oval Office. However, the presser was still filled with gaffes, stumbles and the 78-year-old president apparently losing his train of thought.

Shortly after Joe Biden staged his presidential press conference on Thursday, photos emerged providing a closer look to what appears to be his cheat sheets, immediately fueling discussion on the internet.

While using notes during pressers is hardly unprecedented, netizens particularly caught how names and pictures of reporters were listed on one of Biden's cards, with some correspondents' pictures having numbers next to them.

Another cheat sheet included key notes on US infrastructure.

“The United States now ranks 13th globally in infrastructure quality — down from 5th place in 2002,” one bullet point reads, still not helping Biden to avoid mistaking on that, as he said that the US ranked 85th in the world in infrastructure, before correcting himself.

JUST REVEALED 🚨 Biden had a cheat sheet of all the journalists with numbers circled next to reporters’ names in his first-ever press conference as a President pic.twitter.com/IQx7Dp4vJj

​After getting a sneak peak into Biden's notes, some twitterians lambasted the press conference for being "scripted", while denouncing the president for not being able to answer questions on his own.

Can we not call it a press conference? Clearly wasn’t

@POTUS has been cheating and plagiarizing since his college years! Nothing new here folks!…

We gave my granny one of these when she was diagnosed with Alzheimer's too.

​Some came up with their own version of a presidential cheat sheet.

​Others, however, argued that Biden's cards only illustrated his preparedness for the press conference and his desire to stick to facts. Some pointed out that not everyone can easily remember a bunch of reporters' names.

He came prepared. And?

Makes sense to me. That’s how he knows which reporter is which when he has to call on them.

It’s nice to have a President who’s prepared! Such an upgrade!

I like this. It shows he wants to make more of a connection with the media. I bet he doesn't make fun of any of them either!

​Be it preparedness or forgetfulness, Biden still offered a handful of gaffes during his first presidential presser, again asserting that he had been in Senate "for 120 years" and dropping a now memeficated "Jim Eagle" line without explaining who Jim Eagle is and how he or she is connected with voter integrity.

"What I'm worried about is how un-American this initiative is. It’s sick. It’s sick...This makes Jim Crow look like Jim Eagle", Biden said, commenting on initiatives to require voters to show an ID before obtaining a ballot.

Still, when answering questions, he covered issues including the border situation in the US, the coronavirus pandemic response, foreign policy and gun control initiatives.