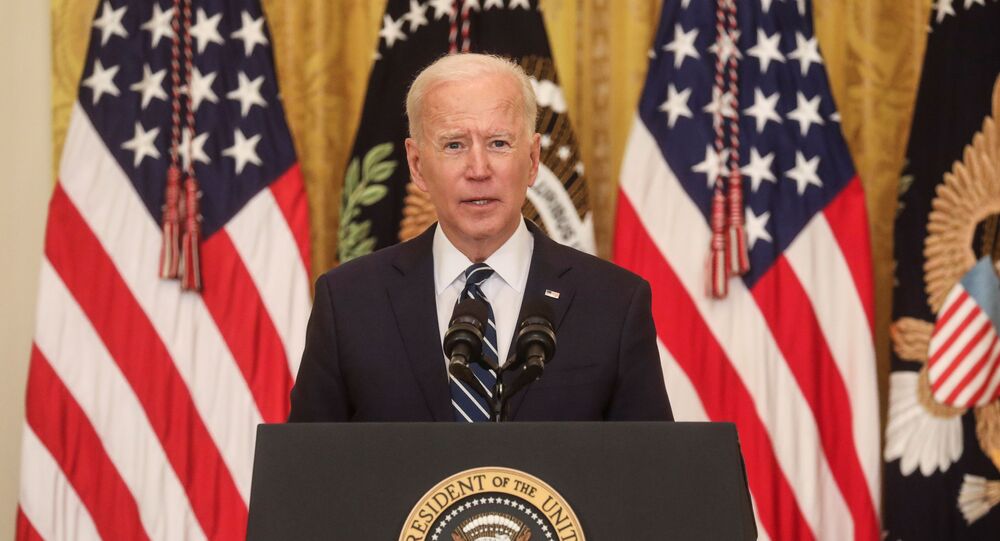 Weeks after being sworn in, US President Joe Biden has held his very first news conference. The commander-in-chief took the opportunity to address a variety of concerns among the US public, including the pandemic and the surging migrant crisis at the US-Mexico border, among others.

Appearing in his first news conference on Thursday, Biden informed reporters that his administration is continuing to work towards delivering on promises that were made early on after assuming the presidency.

Biden kicked off the highly anticipated conference by stating that the administration would be establishing a new goal to administer 200 million COVID-19 vaccines within his first 100 days in office.

"I know it's ambitious ... but no other country has come close," Biden told reporters. "I believe we can do it."

However, Biden also acknowledged that the administration has more to do when it comes to children returning to schools, and improving the economic situation so that jobless Americans can return to the workforce.

"I got elected to solve problems," the president remarked, underscoring that his term's "fundamental problem is getting people some peace of mind."

"Help is here and hope is on the way," he added.

Migrants Coming to US Because 'Biden's a Good Guy'

Over the last several weeks, the Biden administration has repeatedly tiptoed around using the "crisis" label when it comes to describing the current migrant surge at the US-Mexico border, despite several Border Patrol facilities becoming severely overcrowded.

Asked about the skyrocketing migrant cases, Biden told the assembled group of reporters that "I guess I should be flattered that people are coming. Because I'm the nice guy, that's the reason why it's happening."

"They know that I'm a decent man or however it's phrased. That's why they're coming because Biden's a good guy. Truth of the matter is, nothing has changed," he added.

© REUTERS / ADREES LATIF
Linda, an asylum-seeking migrant from Honduras, awakes at sunrise next to others who took refuge near a baseball field after crossing the Rio Grande river into the United States from Mexico on rafts, in La Joya, Texas, U.S., March 19, 2021

Under the Biden administration, the number of illegal border crossings and asylum claims have significantly increased. Although Border Patrol officials are turning away many adults and families, they have been giving clearance to hundreds of unaccompanied minors.

Figures recently obtained by CNN reveal that officials detained more than 11,000 unaccompanied minors between February 28 and March 20 alone, marking a sharp increase from the 5,600 children who were taken into custody in January.

Asked about the camp conditions that migrants are being subjected to, Biden stated that the "totally unacceptable" circumstances are "gonna get a whole hell of a lot better real quick, or we're gonna hear of some people leaving."

"We can get this done," he stressed, stating that over the next week about 1,000 people being held at Border Patrol centers will be moved to "safe, secure beds and facilities."

Touching on why he has yet to push Republicans on immigration reform, Biden remarked that members of the GOP "have to posture for a while. They gotta get it out of their system." However, Biden did inform reporters that he is willing to work with Republicans who "want to solve the problem or make the situation better."

Biden's remarks came one day after he selected Vice President Kamala Harris to serve as the point person in leading the White House's efforts to tackle the growing crisis. The initiative will see Harris work to stem the flow of illegal border crossings, while also working to establish a partnership with El Salvador, Guatemala and Honduras.

Earlier, the US House of Representatives cleared two immigration bills to create a pathway to citizenship for over 2 million immigrants who arrived as minors in the US. While the effort has been praised, both bills face an uphill battle in the evenly divided US Senate.

Unlikely US Troops Will Leave Afghanistan by May 1 Deadline

Asked about the possibility of American troops withdrawing from Afghanistan by May 1, Biden told reporters that it was unlikely that the administration would be able to meet the deadline, which is in accordance with the US-Taliban agreement.

"It's going to be hard to see the May 1 deadline," he stated, explaining the withdrawal setback is for "tactical reasons."

© AP Photo / Sgt. Justin Updegraff
This June 10, 2017 photo released by the U.S. Marine Corpsshows an AH-64 Apache attack helicopter provides security from above while CH-47 Chinooks drop off supplies to U.S. Soldiers with Task Force Iron at Bost Airfield, Afghanistan. Sixteen years into its longest war, the United States is sending another 4,000 troops to Afghanistan in an attempt to turn around a conflict characterized by some of the worst violence since the Taliban were ousted in 2001.

Biden further noted that he has been meeting with allies to map out a way in which US forces will be able to "leave in a safe and orderly way." He also stated that he "can't picture" troops remaining in the Middle Eastern country by 2022.

"It is not my intention to stay there for a long time… we are not staying a long time," he doubled down, adding that "we will leave, the question is when we'll leave."

The president's latest remarks on the topic came after recent reports suggested that Biden was considering asking for a six-month extension on the deal.

Addressing the recent missile tests carried out by the Democratic People's Republic of Korea (DPRK), Biden highlighted that the move was a violation of UN Resolution 1718, and that the US would respond accordingly."

"There will be responses if they choose to escalate," he said in response to the ballistic missile tests, which marked the very first under the Biden White House.

Additionally, the commander-in-chief indicated that his administration would be willing to open a diplomatic resolution if it's "conditioned upon the end result of denuclearization."

The DPRK's missile tests came after Pyongyang issued several warnings against the US for more than a week over its newly restarted military drills in the region. The US had previously held off on conducting exercises with regional partners as a result of the COVID-19 pandemic, but opted to renew its efforts earlier this month alongside South Korea.

North Korea has long believed US exercises are a dress rehearsal for an invasion. Most recently, Kim Yo Jong, the sister of North Korea leader Kim Jong Un, urged the US against "causing a stink" in the region with its drills, warning that it would take "special" measures if the events were not called off.

While the Biden administration has not offered a clear take on is policy toward Pyongyang, it's believed that the US president will follow policies taken by his predecessor. The US and North Korea have remained at a stalemate since talks came to an abrupt end in February 2019.

US 'Not Looking for Confrontation' With China

Touching on the ever-tense US-China relations, Biden emphasized that while his administration has no interest in engaging in a clash with China, it also is not going to let it become the leading country in the world.

"We'll have strong competition, but we'll insist China play by the international rules," Biden said, before adding that the US is "not looking for confrontation although we know there will be steep, steep competition."

The president explained that in order to push back against China, the US needs to reinvest in American workers and the sciences, reestablish its alliances with world partners and call out human rights violations in China.

He added that he intends to host global leaders at the White House "before too long" to discuss the future.

In the wake of two back-to-back mass shootings in the US, Biden promised that a range of rapid actions would be taken on gun control in the near future, but stressed that it would take time.

Biden's campaign promises on the topic of gun control stated that he would work to hold gun manufacturers accountable, institute a ban on assault weapons and high-capacity magazines and introduce legislation that would halt the proliferation of so-called "ghost guns," among other efforts.

To date, Biden has not yet delivered on those promises.

Biden told a reporter that he was still committed to delivering on his campaign promises, but underscored that "it is a matter of timing."

Following the recent deadly shootings in Georgia and Colorado, Biden has urged congressional lawmakers to take up a new assault weapons ban similar to the federal assault weapons ban that expired in 2004 under the Bush administration. He's also called for the implementation of tougher background checks.

"There’s lots of leverage you can take, obviously, as president and vice president,” Psaki said at the time.

© REUTERS / KEVIN MOHATT
Law enforcement officers sweep the area outside of a King Soopers grocery store, which was the site of a shooting in Boulder, Colorado, U.S. March 22, 2021

The deadly attack in Boulder, Colorado, marked the seventh mass shooting the US has documented in 2021. The incident claimed the lives of 10 people, and came less than a week after a gunman attacked three massage parlors in Georgia. The Georgia shootings killed eight individuals, six of whom were women of Asian descent.

Next US Senate Session 'Sure to See Progress' on Gun Control Bill, Majority Leader Says