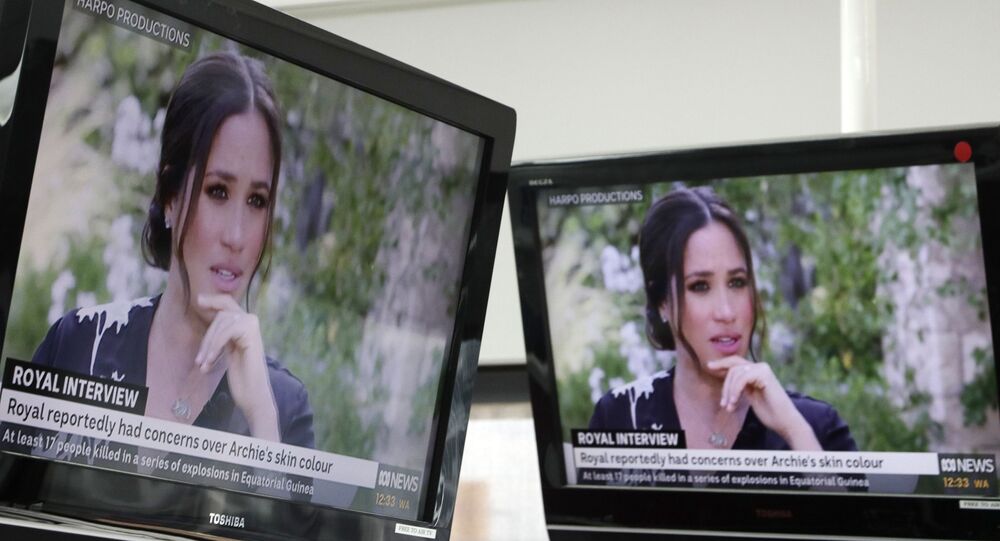 'Who is Ursula?' Twitter Explodes as Meghan Markle Compares Herself to 'Voiceless' Little Mermaid

In a hotly anticipated sit-down with Oprah Winfrey, Meghan Markle and Prince Harry dropped bombshells over their relationship with the Royal Family, with the former Suits star revealing that she was suicidal during her pregnancy and "naive" to marry Harry.

Meghan Markle has drawn parallels between herself and "The Little Mermaid" in an explosive interview with famous talk show host Oprah Winfrey.

Markle, who met her real-life prince, Harry, revealed that she realised how similar her situation was to that of Ariel's as she watched the Disney movie.

© AP Photo / Dominic Lipinski
Meghan Markle Claims Royal Family Had ‘Concerns’ About ‘How Dark’ Her Son’s Skin Would Be
In the animated movie, the little mermaid, Ariel, falls in love with Prince Eric, who is human, and in order to be with him on land, she makes a deal with a wicked sea witch named Ursula. Under the deal, Ariel gives up her life in the sea and her voice in exchange for three days as a human to be with her prince.

Eventually, Ursula is defeated, and Ariel gets her happily ever after as she has her voice back, stays human for good, and marries the prince.

"I was sitting in Nottingham cottage and The Little Mermaid came on. And who as an adult really watches The Little Mermaid but it came on and I was like, 'Well I'm here all the time I might as well watch this'. And I went, 'Oh my God she falls in love with the prince and because of that she loses her voice'. But in the end she gets her voice back", Meghan says.

Oprah suggested "And this is what happened here. You feel like you got your voice back", to which the Duchess replied with a single word: "Yeah".

Later, the former actress told Oprah that her love story with Harry has been "greater than any fairytale you've ever read", however, social media users flocked to Twitter to guess who Meghan considers "Ursula" in her story.

If Meghan was the lil mermaid, who is the Ursula who took her voice? There is a specific name and I want it! #OprahMeghanHarry

Um, me. I am the adult woman who watches The Little Mermaid, Meghan. But point made.

Who is Ursula the evil sea witch in that analogy, though? 👀👀👀 #HarryandMeghanonOprah pic.twitter.com/mdmHSgoaZE

Some suggested that Meghan meant Queen Elizabeth II, but the Duchess told Oprah that the monarch had always been "wonderful to her", and she "loved being in her company".

Did Meghan just call the Queen Ursula since she took her voice?

​Others were seemingly shocked at the spot-on parallel, saying they teared up at the comparison:

Meghan referencing the parallel with Harry and the little mermaid finding her prince, losing her voice and gaining it back in the end and the look she gives him #MeghanandHarryonOprah pic.twitter.com/3Fi5ZjG1U5

Someone tell me why I teared up when Meghan compared herself to the Little Mermaid!!!

The way Meghan described the Little Mermaid in comparison to her life. #MeghanandHarryonOprah pic.twitter.com/VgGHpLZrDf

During her candid conversation with Oprah Winfrey, Meghan Markle was asked if she was "silent or silenced" at the beginning of her life within the Royal Family.

"I've always valued independence. I've always been outspoken, especially about women's rights, and that's the sad irony of the last four years, I've advocated for so long for women to use their voice. And then I was silent", Meghan said, prompting a question from Oprah: "Were you silent, or were you silenced?"

In the interview, Meghan and Harry revealed that they're expecting a baby girl, with the Duchess of Sussex opening up about having suicidal thoughts during her pregnancy after bullying from the media and amid the pressure of dealing with life as a royal.