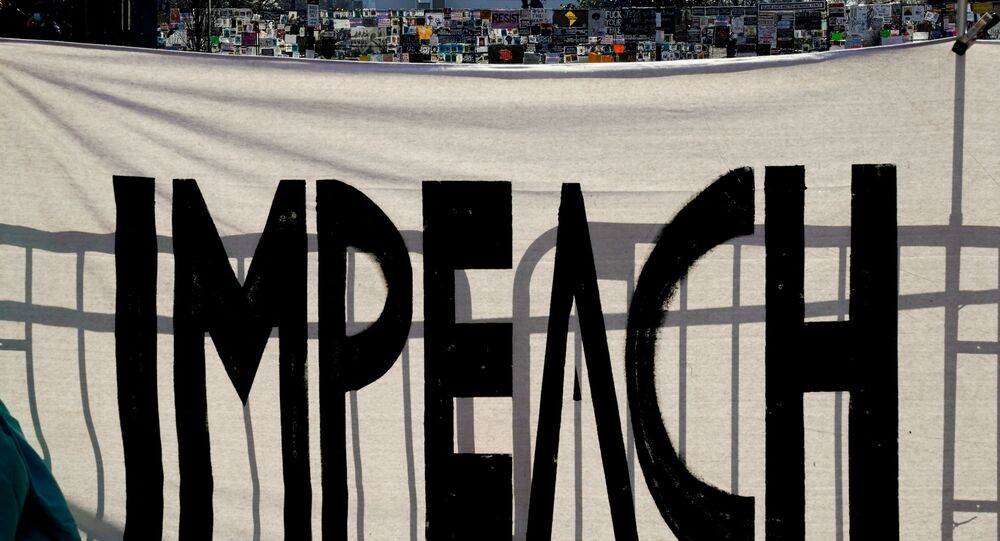 On Wednesday, the US House of Representatives impeached the outgoing US president, Donald Trump, for an unprecedented second time, accusing POTUS of "incitement of violence" during last week's deadly riots in the US Capitol.

As Trump on Wednesday historically became the only US president to be impeached twice, social media propelled his name, along with the word "impeachment", to worldwide trends.

Netizens sarcastically congratulated the president on his second impeachment, noting that he also failed to be re-elected or win the popular vote. Launching celebratory hashtags such as "#ImpeachmentDay, users memeified Trump's anti-record and came up with more and more reasons to ridicule the outgoing president.

Among other things, it was Trump's inability to share his rants regarding the impeachment through tweets, after his Twitter account was permanently deleted for the "incitement of violence" that during last week's deadly Capitol riots that saw five killed and widespread damage and vandalism.

Donald Trump today became the first president in American history not to be able to tweet in response to his second impeachment.

"MORE IMPEACHMENTS THAN ANY OTHER PRESIDENT" pic.twitter.com/v9dE9WL0sA

Wordplays and references to pop culture or food products, everything became a base for impeachment-related memes.

congratulations donald trump for being impeached for the second time why not aim for a hat trick?? pic.twitter.com/cbCVfoxEEP

He gets TWO scoops of this...
(And this gem of an example of his smallness: he would get 2 scoops of ice cream at taste dinners & everyone else would only get one)
https://t.co/Hrgaz1Cc1x pic.twitter.com/TQeDpTCqIn

​​Some users also recalled a famous 2016 tweet by the outgoing US president's son, Donald Trump Jr, after the latter mocked Bill Clinton for being impeached - a post that most certainly did not age well.

imagine saying this and then ur dad gets impeached not once but TWICE 😭 pic.twitter.com/a8BeECSgiy

Netizens came up with an old tweet by the outgoing president that now hits different.

​​However, there were those who did not feel the same level of excitement about the impeachment.

What’s the point of impeachment if you never have the guts to remove anybody? Y’all might as well have sent a strongly worded email.

Trump was impeached for the first time back in 2019 for two articles - abuse of power and obstruction of justice. Democrats accused the president of pressuring Ukranian president Volodymyr Zelensky to investigate Joe Biden's son, Hunter. However, the Senate acquitted Trump of these charges in February 2020.

The second impeachment for Trump was nurtured by House Democrats, and several dissenting House Republicans, as they accused Trump of "incitement of insurrection" during the deadly 6 January riots in the US Capitol that left 5 people dead and temporarily disrupted the certification of election results.

Trump continues to deny responsibility for the violence, insisting that he never wanted violence on US streets.