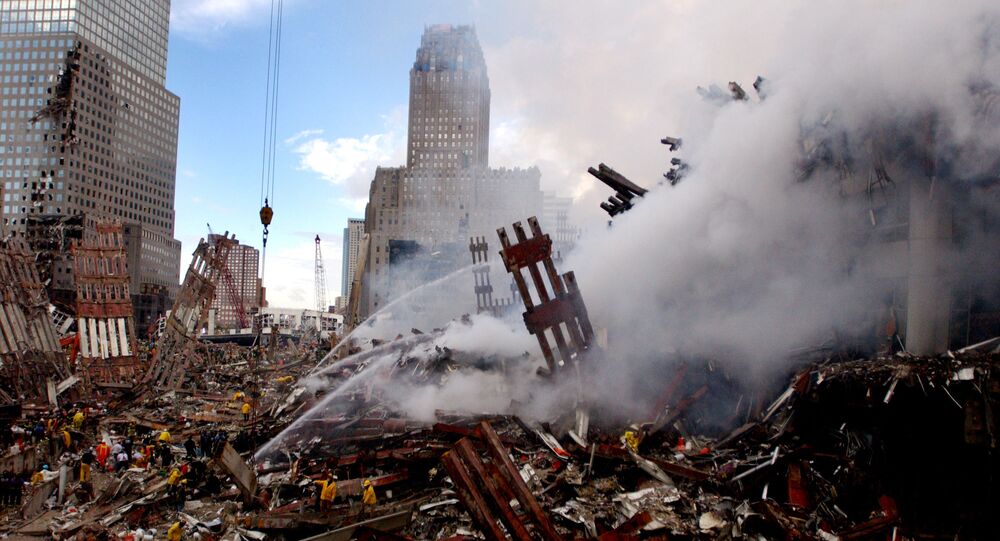 This year's commemoration of the tragic events of 2001 in the US overlapped with ongoing anti-racism and anti-police-brutality protests, which have at times resulted in casualties and destruction of buildings and other property.

The commemoration for lives lost in the attacks on New York City's twin towers of the World Trade Centre and the Pentagon, on 11 September 2001, are shadowed by a controversial hashtag making waves and spreading across the American section of Twitter - #AllBuildingsMatter.

The tag is a mockery of the All Lives Matter motto, which emerged in light of riots in the US this summer, and was first brought up by comedian Michael Che in 2016. Che used it as a response to calls to "never forget" the 9/11 terror attacks, amid the lack of attention to continuing and systemic racism in the US, as a result of longterm enslavement and segregation.

"That’s why this September, I’m getting a T-shirt that says, ‘All buildings matter.’ We’ll see how that works", Che said in 2016, proposing the act as a response to the lack of public attention toward racism in the nation.

While it is unclear if Che fulfilled his promise, four years later his motto is trending slightly below the "never forget" devoted to the victims of 9/11 attacks (rather than the buildings, as the hashtag would suggest). This fact divided twitterians, many of whom declared the hashtag to be an insipid joke promoted by BLM protesters, and so a desecration of the memory of those who died in the tragedy.

The hashtag #AllBuildingsMatter is trending on Twitter because radical left are SCUM who have no respect for America or the people who sacrifice for her.

If any of you self-important childish babies tagging #AllBuildingsMatter even had a clue what happened this day 19 years ago, had seen it, had experienced it, you’d never open your mouths again. It’s not about a building, or three buildings. You’re proving the Right, right.

Some netizens wondered why the #AllBuildingsMatter is promoted by BLM protesters, since their own protests against police brutality and endemic racism in the US at times turned into riots that saw hundreds of buildings vandalised or burnt.

Hilarious part of the #AllBuildingsMatter trend is it is being tweeted by people who are burning buildings daily.

So #blm says #AllBuildingsMatter but these buildings don't matter? pic.twitter.com/7jH1DdUnK3

I'm fine w/ #AllBuildingsMatter. It doesn't diminish 9/11 or the WTC.

I wonder why those promoting the hashtag feel it is OK to burn down courthouses, police stations, stores, and condos.

BLM supporters were quick to defend the trend, claiming that African-Americans feel the same as those infuriated by the hashtag, after key motto 'Black Lives Matter' was co-opted to 'All Lives Matter' by counter-protesters.

Some have noted that for deaths, injuries and prison populations, the 9/11 tragedy pales in comparison to the tragedy of ongoing racism in the US.

For those calling 9/11 “America’s worst tragedy,” a combined 150 million Native American and African ancestors murdered by the white supremacist violence that birthed and maintained America would like to have a word with you. #AllBuildingsMatter #NeverForget pic.twitter.com/fzVFE3sI6S

Several netizens said that despite being promoted by BLM supporters, the #AllBuildingsMatter hashtag undermines Black Lives Matter, not empowers it.

I'm going to say again that #AllBuildingsMatter is an obvious attempt to smear and undermine the legitimacy of #BlackLivesMatter. And there's a ton of people falling for it on both sides of the aisle. I don't know how, as the whole premise is REALLY stupid, but that's the goal. pic.twitter.com/c3UsJD6Vw9

#AllBuildingsMatter would be a good troll if #BlackLivesMatter
was a legitimate cause. It is not. pic.twitter.com/bN536kpima

Black Lives Matter protests have been rocking the US since the end of May after an African American resident of Minneapolis died at the hands of white police while in custody. Participants demand to resolve systemic racism in the country and many seek to "defund the police". Some peaceful protests have turned violent, particularly in response to a heavily-militarized police response, resulting in casualties, vandalism, looting and arson of both government and private property.