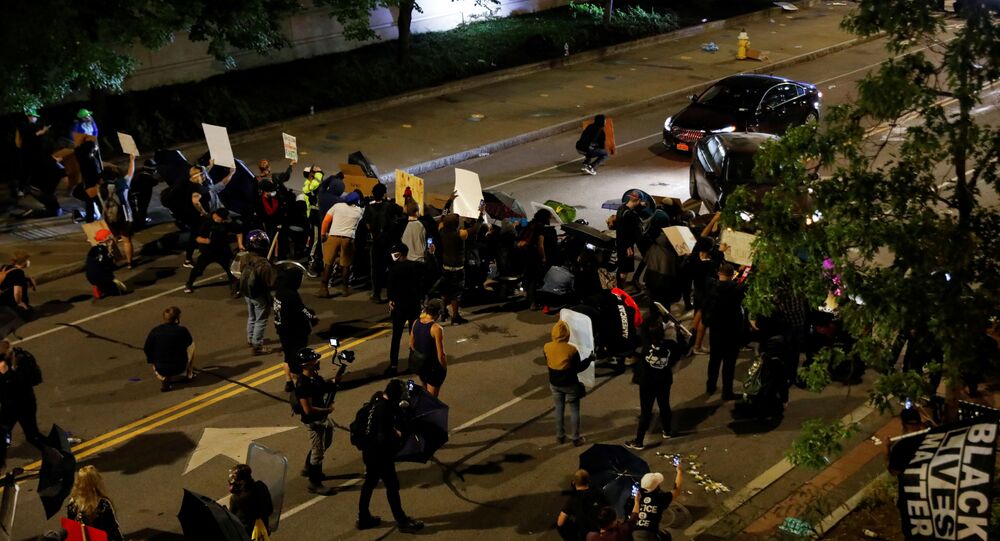 In late August, a video went viral showing a 49-year-old urban planner being harassed by Black Lives Matter protesters while she was dining with a friend in the Adams Morgan district of Washington D.C.

A wild mob of demonstrators caused diners to flee in panic after they smashed into a restaurant in Rochester, New York on Friday night. A crowd of the so-called anti-racism protesters broke into the restaurant, breaking plates, overturning chairs and shouting at the visitor to get out of the facility.

"We're shutting your party down", one woman is heard shouting on footage captured by FreedomNewsTV.

Later on the demonstration was met by a wall of law enforcement officers, who deemed the protest an unlawful assembly, saying via megaphones that people who stay behind would be arrested.

At that moment, reports suggested the police started launching tear gas into the crowd.

© AFP 2021 / Michael M. Santiago/Getty Images
Police officers attempt to clear the streets after a march for Daniel Prude on September 04, 2020 in Rochester, New York. Da Prude died after being arrested on March 23, by Rochester police officers who had placed a "spit hood" over his head and pinned him to the ground while restraining him. Mayor Lovely Warren announced yesterday the suspension of seven officers involved in the arrest

Daniel Prude, 29, died in March of this year after police restrained him on the ground and covered his head with a hood. At the time, his brother Joe had contacted 911 saying that his sibling had begun suffering a mental health episode.

Prude walked out of Joe's house at around 3 a.m. in frigid temperatures, wearing only underwear, a tank top, and socks. As he was walking along the street he started removing his clothes and when he encountered several people, at least one of them called 911 to report the erratic behaviour.

After officers arrived at the scene, they handcuffed him, and when Prude appeared to spit at the cops, they placed a hood over his head. An officer held his head down while another knelt on his back. After being pinned down for several minutes, Prude lost consciousness.

An autopsy report from the Monroe County Medical Examiner’s Office ruled Prude’s death a homicide, stating that his cause of death included "complications of asphyxia in the setting of physical restraint", Rochester First reported.

On Thursday, all seven officers involved in the death of Daniel Prude were suspended.