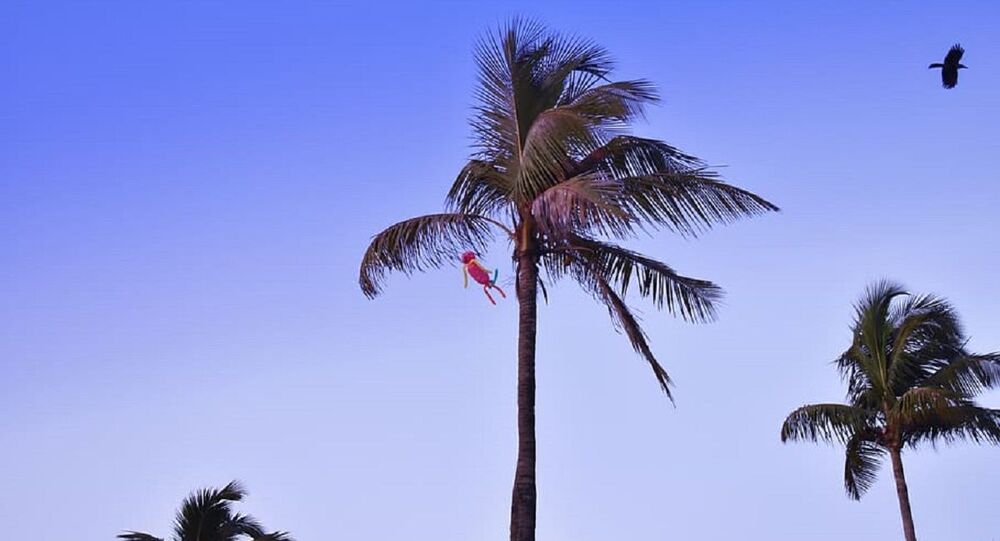 New Delhi (Sputnik): Amid grim videos of streets and houses flooded with masses of rainwater and horrifying footage of ocean waves crashing over Mumbai’s iconic Sea link, a clip of a tree swinging in the strong winds has emerged on social media.

Footage from India's cosmopolitan city of Mumbai has captured the unnerving moment when a palm tree was swinging from side to side after coming under the impact of cyclonic winds.

The incident, which would have led to the horror of people witnessing it, is going viral on social media, leading to an explosion of hilarious memes and jokes on Twitter.

While some joked that the tree is "possessed" by an evil spirit, others said that it is tripping on a rock song.

However, the seriousness of the extreme weather situation was not lost upon some, who were left aghast at the sheer impact of the heavy rainfall and shared related videos of Mumbai's flood-like situation. Two people have died and two are missing in in the city.

​Mumbai has been under the grip of a massive deluge due to torrential rainfall since Monday. Strong gusty winds, heavy rainfall, and inundation over 24 hours brought life in Mumbai to a standstill.

The India Meteorological Department has forecast moderate to heavy rainfall for the next 3-4 hours for Thursday, accompanied by strong winds reaching 60-70 kmph. The wind speed is equivalent to the post-landfall effect of Cyclonic Storm Nisarga (90-100 kmph) recorded on 3 June.

Aftermath of Crane Collapse at Port Near Mumbai Caught on Camera