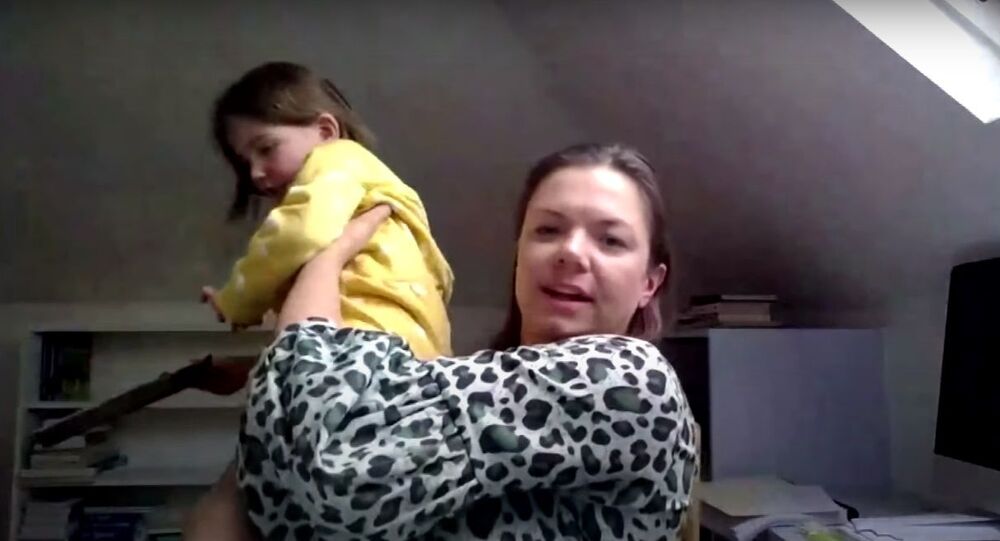 ‘BBC Dad’ Now Has a BBC Mom: These Interview Crashes Will Make You Laugh

The work-parent balance is sometimes disturbed in the most public way imaginable. The pandemic has made this balance all the more fragile and given humanity some viral interview intrusions.

Kids and pets can arguably only enhance a piece of news, not crash it.

Their mischievous little intrusions often instantly become iconic, which was the case with Wednesday’s BBC interview with Dr Clare Wenham from the London School of Economics.

Where should the unicorn go?

Wenham valiantly tried to talk about local lockdowns in the UK as her daughter climbed on top of the desk to get her attention.

When the kid experimented with arranging a unicorn picture on a book shelf, BBC host Christian Fraser couldn’t help but engage.

He asked the girl’s name and said: “Scarlett, I think it looks best on the lower shelf…and it’s a lovely unicorn”.

Dr Clare Wenham, we understand your struggles of working from home and looking after children 😂https://t.co/vXb15EQatL pic.twitter.com/4f3PODtJWA

The girl then asked the presenter’s name and, upon learning it, turned the conversation to the pressing subject of where the unicorn should be put.

“I think just on that shelf is great, thank you”, Dr Wenham said, before apologising to Fraser. The presenter took the exchange with good humour, describing it as “the most informative interview I’ve done all day”. The family eventually agreed on the upper shelf.

We’ve decided on a shelf for the unicorn.

Coincidentally, a similar story occurred during a Sky News interview that day, when a hungry toddler interrupted an interview with the channel’s foreign affairs editor Deborah Haynes.

“I’m really sorry that’s my son arriving”, Haynes said, trying to stay classy. “Yes, you can have two biscuits”, she told her kid, after which the segment suddenly cut off.

Thank you for the lovely comments after my son’s impromptu appearance mid-live-broadcast. I can confirm that his high-stakes negotiating skills netted him two chocolate digestives https://t.co/OQRGiMNih2

​Mark Austin, who conducted the interview, commented on his colleague’s departure: “We’ll leave Deborah Haynes in full flow there with some family duties… but that’s what happens during lockdown”.

Two at a time

These two bloopers formed one of the best television moments of all time – the BBC's interview with Prof. Robert E. Kelly.

The North Korea expert rose to fame in March 2017 when his daughter Marion and son James adorably crashed the interview and also pushed their mother, Jung-A Kim, into the spotlight. Kelly was subsequently nicknamed the “BBC Dad”.

Kelly revisited the moment this March, when he reappeared with the trio to talk about the challenges of working from home and raising children. They were just as playful as three years ago.

Hollywood’s biggest stars aren’t immune to such crashes either. Avengers star Chris Hemsworth was hilariously distracted by his six-year-old son during an April interview.

The boy walked into frame and smiled before making an exit after Hemsworth whispered something to him. However, he appeared to continue with his shenanigans in the background.

“I’m enjoying this interview already, because I’m watching Chris, who can do anything, Hollywood star, life’s going beautifully, but like all of us, can’t keep his kids under control”, remarked host Luke Darcy.

“He’s looking at me, right?” the actor replied with a shooing motion. “At the moment I’m giving him a little sort of ‘shh, shh’ — one of these ones — [he’s] doing more and more somersaults. He’s getting a little louder”.

The Aussie star then tried to continue before pausing mid-sentence again because his son began to throw pillows at the computer.

Fluffy with a chance of purr

But it’s not only kids who sometimes end up on the wrong side of the camera. A couple of meteorologists in the US were forced to give reports from home together with their pets because of the coronavirus.

“Everybody says, ‘My coworker this, my coworker that’. This has been my coworker all day”, said the Weather Channel’s Jacqui Jeras as she picked up her schnauzer Astro.

Her colleague Chris Warren tuned in with his cat Lulu blocking out most of the view. “I got my coworker with us as well”, he joked. It definitely rained cats and dogs at home that day.

FOX 13’s chief meteorologist in Tampa, Paul Dellegatto, had to give an at-home forecast with a show-stealing dog.

Dellegatto said during a May broadcast that this sidekick Brody “whacked the computer with his head”, preventing him from showing any weather maps. “Let me just verbalise the forecast”, the presenter said, before chiding the animal: “That wasn’t very smart”.

It also emerged that Dellegatto had two framed pictures of his previous pup on his desk.

And as a little bonus, check out this video of the cutest pumpkin photobombing an at-home guided workout to the tune of “Sober Up”.