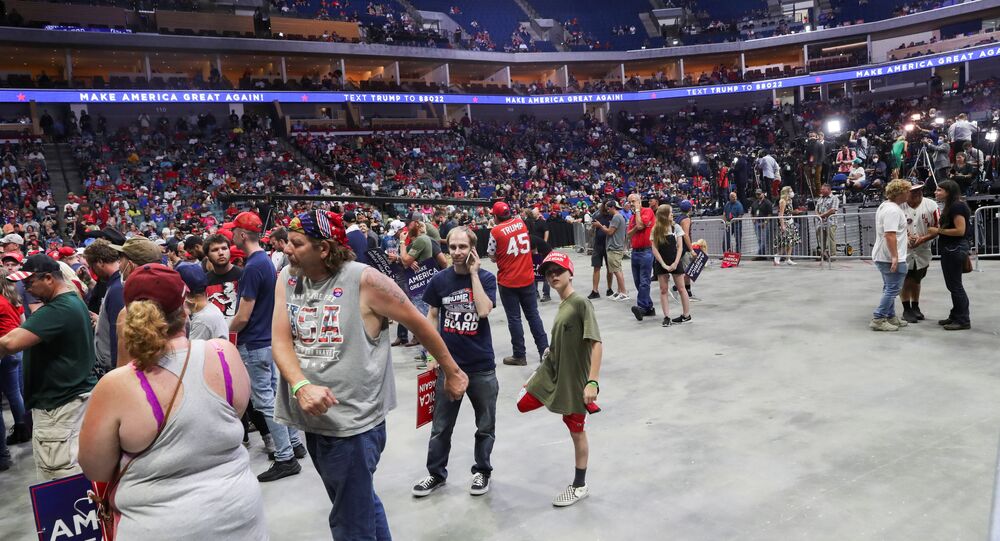 Despite social distancing guidelines and a rising number of registered coronavirus cases in the region, US President Donald Trump went ahead with his first publicly-attended campaign rally in months, this time in Tulsa, Oklahoma.

Twitterati mocked the low turnout at Trump's Tulsa rally, which was initially promoted as an event that would gather an enormous crowd of enthusiastic supporters.

Prior to the rally, Trump boosted that an estimated 1,000,000 tickets for the event had been requested. The reality turns out to be less impressive, with the BOK centre a lot emptier than promoted - to the extent that planned outdoor events were cancelled.

Netizens shared video in social media revealing that there were a lot less people in the stadium prior to the beginning of the program.

At this point, it does not appear crowds are what campaign projected.

​Despite a Trump campaign assertion that the low turnout was because of "protesters interfering with supporters", the ridicule continued unabated.

Trump walking into what he thought was going to be a rally of millions: pic.twitter.com/e9ItvERArL

Trump said a million people wanted tickets to his rally, so clearly he's speaking in a three-million seat auditorium.

Just imagine being the people that waited for days to get into the trump rally and realizing you could have drove up, got a great place to park, and walked in 5 minutes prior to the rally starting.

​Some users noted that a greater amount of visitors might have been sticking to quarantine-developed habits.

A few hundred thousand have thought it was a zoom meeting.

​Some recalled Trump's tendency to blame what he refers to as the "lamestream media" for everything that he does not like.

How has CNN hidden all the crowds at the Trump rally?

​There were some optimists - at least a lot of nice seats were available.

​A TikTok post earlier urged people to reserve tickets and then leave them unused to see the empty stadium. Who knows, maybe it was the plan that worked out.

Mary Jo Laupp, a grandma who worked on Buttigieg’s campaign, seems to be the one who first encouraged TikTok users to troll Trump's campaign.

In this video, now seen by over two million people, she urges users to reserve tickets they won’t use for today’s #Tulsa rally. pic.twitter.com/AaCJsFBnSX