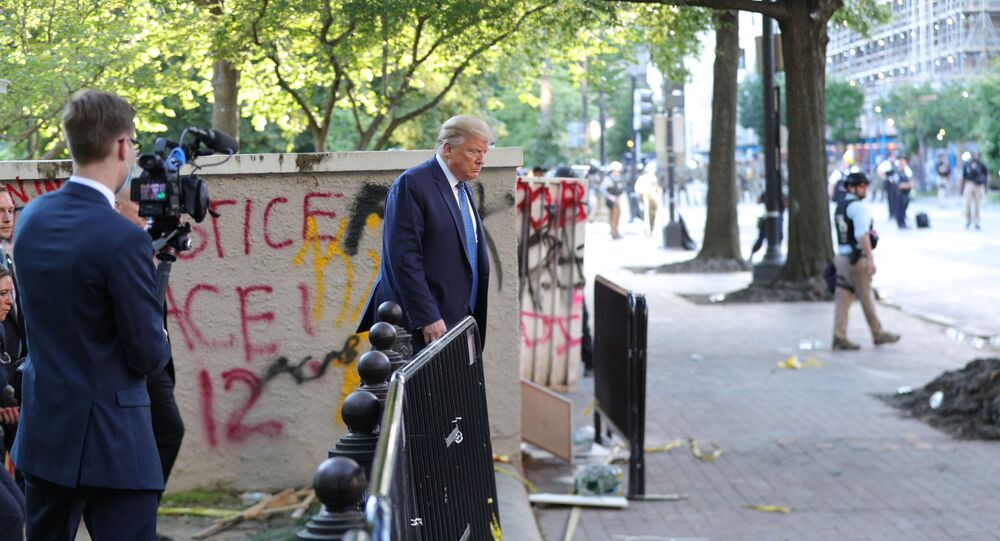 On Tuesday, US President Donald Trump walked from the White House to the damaged St. John's Church following violence by anti-police-brutality protesters over George Floyd's death. The visit was widely criticized after Trump allegedly ordered protesters dispersed from nearby Lafayette Square with tear gas and rubber bullets.

“For this president, it was powerful and important to send a message that the rioters, the looters the anarchists, they will not prevail, that burning churches are not what America is about,” McEnany said.

Netizens laced the comparison, noting that Trump had reportedly ordered the use of tear gas and rubber bullets against a crowd of peaceful protesters on nearby Lafayette Square to make way for his staged photo-op. Trump denied the accusations, but has nonetheless been widely accused of making the visit only for the photo-op.

Author of book on Churchill and the Nazi bombing blitz during WWII rejects WH comparison to Trump's visit to DC church... https://t.co/1vHf1punGK

Trump's response to police brutality protests is more police brutality. The profane comparison to Churchill is shameless propagandizing or gross loss of historical perspective. (It's both)

​Twitter users refuted the historical accuracy of the comparison, pointing out that there is a "huge difference" between the moves.

Bush sought to defy terrorists who had killed thousands.

And Trump wanted to pretend he wasn’t scared of his fellow citizens, so he had protesters gassed and a priest yanked from a church so he could pose outside it. https://t.co/4H01DcANF7

​Some, however, have spotted a similarity between Trump and Churchill.

Trump’s ONLY similarity to Churchill is maybe his weight, although I think Churchill was a bit trimmer. 😂

​Users also slammed Trump for his "Bible stunt", noting that he held the Bible both upside down and backwards during the photo-op. The widely-criticized staged 'stunt' was also lambasted by Mariann Budde, the bishop of the Episcopal Diocese of Washington, who said to The Washington Post that she was "outraged" by the president's gambit and did not want "President Trump speaking for St. John’s".

“Just wanted to say that I am appalled at the White House attempt to liken Trump's bible stunt to Churchill visiting bombed-out neighborhoods. The comparison verges on obscenity. Churchill wept on these visits; he offered compassion and hope, and helped people find their courage.

Trump White House said today they liken Trump's visit to a Church to that of Winston Churchill.
Are they living in the twilight zone?
Trump doesn't go to Church. He plays golf on Sundays.
How many times you ever seen him go to church? Never.