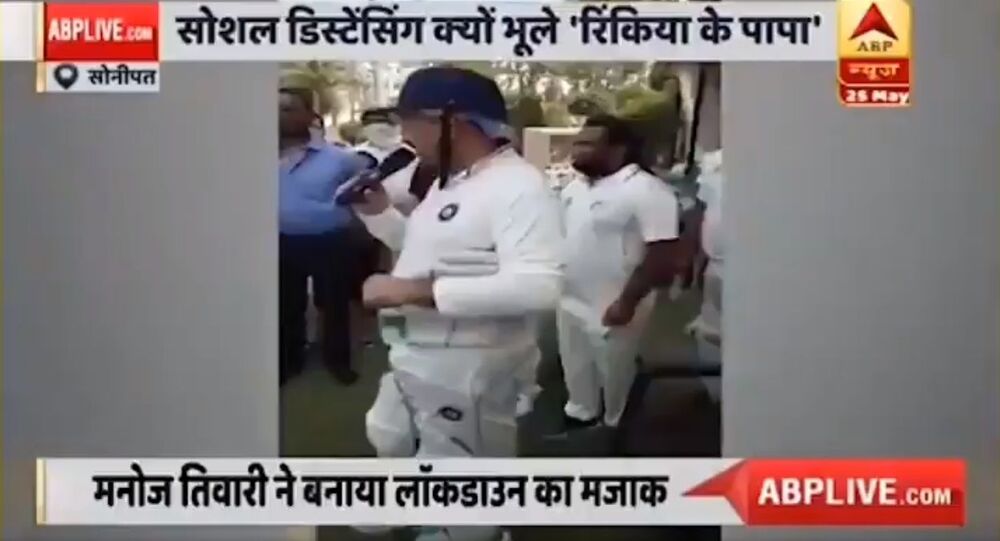 New Delhi (Sputnik): India has been under a national lockdown since 25 March as a containment measure to mitigate the spread of COVID-19. The federal government relaxed the norms on 19 May. But Uttar Pradesh and Haryana have decided to keep their borders with Delhi sealed as the entire national capital is still in the red zone.

National ruling Bharatiya Janata Party politician Manoj Tiwari, a former actor and singer, has come under fire for flouting lockdown norms by crossing the Delhi-Haryana border which is currently sealed by the state government to tackle the coronavirus.

BJP Delhi Chief Tiwari not only violated social distancing when he went to play a cricket match, but also irked local authorities and social media users because he did not wear mask which has been made mandatory due to the pandemic.

Twitter users are trolling the politician by sharing his videos in which he can be seen playing cricket and singing his famous song. #ShameonManojTiwari is also trending on social media as people raised questions with the Haryana state government.

The state government of Delhi’s official twitter handle also slammed Tiwari in a post and said the politician chose to play cricket instead of serving the suffering people of the capital.

Others demanded the BJP politician be arrested.

Giving clarification following the backlash, Tiwari said he was following the guidelines by the Ministry of Home Affairs as they permitted the opening of stadiums without spectators.

“I have always followed social distancing, lockdown norms. MHA permitted opening of stadiums without spectators. Based on that, I went there and played. All norms were followed", Tiwari told national news agency, ANI.