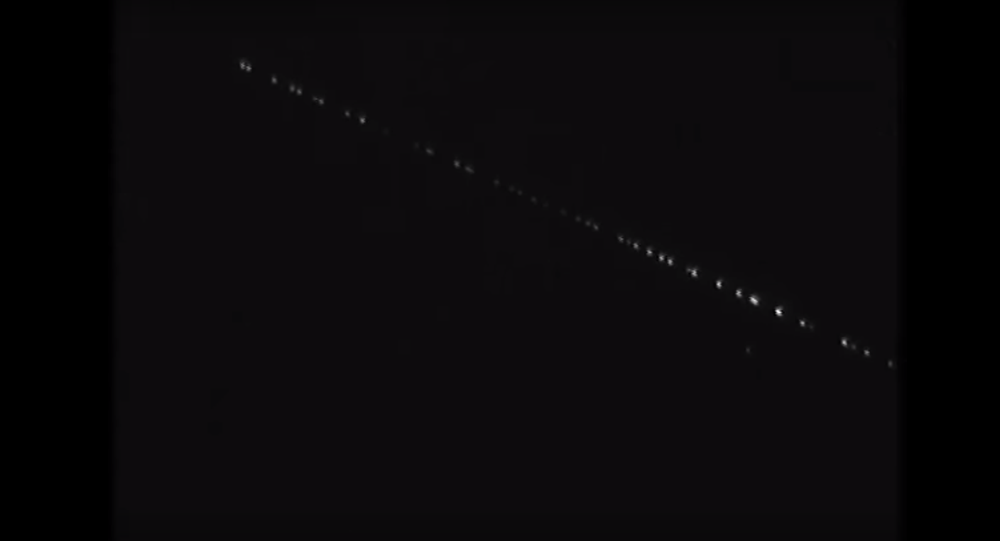 Star-gazers in Europe recently marveled at a spectacular sight in the night skies, comparing the phenomenon to anything ranging from UFOs to Santa's Christmas sleigh.

A striking vision of Elon Musk's Starlink satellites streaking over Europe’s skies ignited the internet recently, with users posting videos and photos of the chain of lights, and expressing their amazement, as not everyone was quick to figure out what they were.

Fancy seeing something really cool?
(some saw it last night)

⬇️This is the #Starlink satellite train from the @SpaceX program and will be visible tonight 🛰. 👀 Look SW to E at around 10pm for 6mins.

Plenty of clear skies for it too! 🌌
pic.twitter.com/U5AIHA9ysC

​Starlink is the informal name for Musk's Space X's ambitious project which seeks to create a constellation of thousands of low-orbit small satellites to beam super-fast internet into homes.

On Twitter, the sight had users in Western Europe likening the apparition to Santa’s sleigh and Christmas lights.

Looks like a load of ETs out for a Sunday Bike ride.

Yes I was just out doing a bit of star gazing in SE London and saw them flying overhead and not knowing thought the Alliens were coming! A total blot on the skyline😢😷

Not all were as enthusiastic, as some echoed the criticism expressed by many astronomy experts.

Yes I was just out doing a bit of star gazing in SE London and saw them flying overhead and not knowing thought the Alliens were coming! A total blot on the skyline😢😷

Does look cool, and I will be out looking for it, but it must be a problem for ground based astronomers, and it's creating more space junk.

This is definitively not cool!

Some astronomers have been criticising the billionaire for the project, insisting the satellites are getting in the way of scientific observations and rendering it increasingly difficult to observe the night sky.

According to them, as the network reflects light from the sun, it can corrupt between 30 to 40 percent of astronomical images.

Slammed as a “crime against humanity” by one zealous sky-watcher, the satellites are suggested as interfering with ground-based radio telescopes which experts use to observe distant phenomena.

According to a recent study from the European Southern Observatory (ESO), satellite mega-constellations such as Starlink will “severely” affect between 30 and 50 percent of observations taken by the Rubin Observatory, currently being built in Chile.

Fending off the criticism, Elon Musk tweeted in May 2019 that the amount of light that satellites have been sending down toward Earth would be studied and measures to mitigate the effects would be taken.

In an effort to deal with the fallout, SpaceX has been reportedly working with the American Astronomical Society for months to come up with a solution to the problems the satellite constellation has created.

What renders the project particularly important is that it aspires to beam internet to areas where connections are harder to get, or more expensive.

With the initial 60 satellites launched on 24 May 2019, and a fifth batch placed in orbit in February, the company now has 300 of the satellites in place.

Future plans presuppose thousands more to be launched over the next few years, with the ambitious target of 1,500 satellites in low-orbit by the end of 2020.