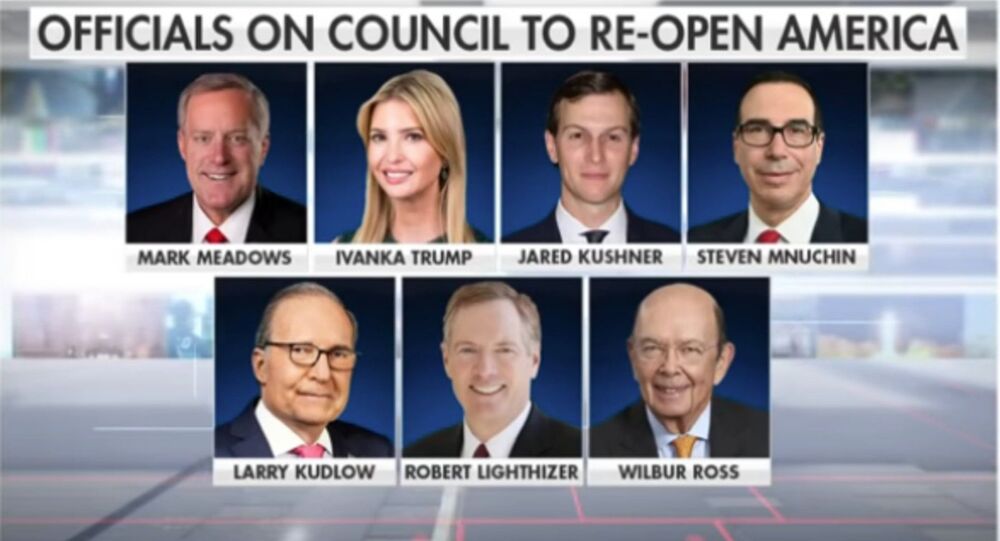 Netizens were quick to critique US President Donald Trump’s potential cast of officials to be part of the “Council to Re-Open America” - the committee the president said would assist him in making the “biggest decision I’ve ever had to make.”

Fox News Chief White House Correspondent John Roberts announced Monday that it appears that “only government people” have been selected to join the “Council to Re-Open America,” which is chaired by White House Chief of Staff Mark Meadows.

Netizens stuck at home due to the COVID-19 pandemic were quick to comment on the so-called “experts” called to oversee the reopening of the US.

1. Former Birther
2. Unqualified daughter of President
3. Guy who bought his way into Harvard and married his way into the WH
3. Producer of Suicide Squad
4. Failed TV Pundit
5. Who?
6. Famous for sleeping through meetings https://t.co/JxLUOlpc4A

28.5 percent of these people are members of Trump's family.

14 percent of them said 1.5 months ago that the virus was contained "pretty close to airtight."

14 percent of them predicted the virus "will help accelerate the return of jobs to North America." pic.twitter.com/rgduyVpdtc

Not. A. Single. Doctor. Or. Scientist.

Many THOUSANDS of Americans are DYING from this deadly #coronavirus, and this motley crew is supposed to "save" us.🤬#FireTrump https://t.co/HEdTRXjHZP

Guys, this new season of The Bachelorette looks really bad...😳🤦🏼‍♀️

Kim Jong Un's sister serves in his (authoritarian) administration - as his chief propagandist. He's a dictator.

Trump's daughter and son-in-law are now on his Council to Re-open America.

Ivanka and Jared on the Council to Re-Open America alongside bankruptcy king Wilbur Ross, who said the coronavirus would be great for American jobs, just before we lost more than 16 million of them in a matter of weeks, is the absurdity only the Trump administration can deliver.

The pseudoscience “council to re-open” America:

Ivanka and Jared are in charge of reopening the economy? I suppose we should be glad that at least Don Jr. and Eric were left off the "council." Such a joke. Years from now, historians will struggle to convince people all of this really happened. https://t.co/Vn7maenuVd

This has to be a joke??? Ivanka and Jared??? That is truly effed up. All the ranting about Hunter Biden and now this??? https://t.co/F9fbPbACrl

What possible relevance could Ivanka and Jared have for this? I'm so tired of the Hunter Biden shit the GOP keeps pushing while enabling this level of dangerous nepotism in our own backyard. https://t.co/KemR6IxmcA

Both Ivanka Trump and Kushner have been criticized recently for making statements to the American people regarding the COVID-19 novel coronavirus while having no expertise in the realms of economics or medicine.

.@IvankaTrump thanks all who have stepped up to help launch the #PaycheckProtectionProgram.

“We asked you to provide additional relief … to our incredible small businesses and you’ve answered that call.” pic.twitter.com/e0KIEN3TWb

👋 I'm old enough is remember when taxpayer funded Govt Stockpiles were for the taxpayers..

JARED KUSHNER: 🤨
"The notion of the federal stockpile was it's supposed to be our stockpile. It's not supposed to be states stockpiles that they then use."pic.twitter.com/k527c3cO8U

For the past several weeks, netizens have also brought up the fact that Kudlow, back in February, claimed to CNBC that the novel coronavirus was “contained” in the US.

“I won’t say [it’s] airtight, but it’s pretty close to airtight,” he said on February 25. The National Economic Council director asserted the COVID-19 outbreak would only result in a “human tragedy,” rather than an “economic tragedy” for the US.

Similarly, Mnuchin said last month that the unemployment rate in the US was not “relevant” when assessing the impact of the novel coronavirus on the country.

“To be honest, I think these numbers right now aren’t relevant whether they’re bigger or shorter in the short term,” Mnuchin told CNBC’s “Squawk on the Street” on March 26, when reports were then claiming 3.28 million new unemployment claims had been filed in a single week.

Before the Trump administration even acknowledged the presence of COVID-19 in the US, Ross appeared on Fox Business in January to assert that the novel coronavirus would “accelerate the return of jobs to North America.”

Secretary Wilbur Ross says coronavirus will be good for [checks notes] American jobs: "I think it will help to accelerate the return of jobs to North America." pic.twitter.com/Y4SbDIcTi4

“The fact is, it does give businesses yet another thing to consider when they go through their review of their supply chain,” he said, referring to businesses who have a choice to run operations in the US or China.