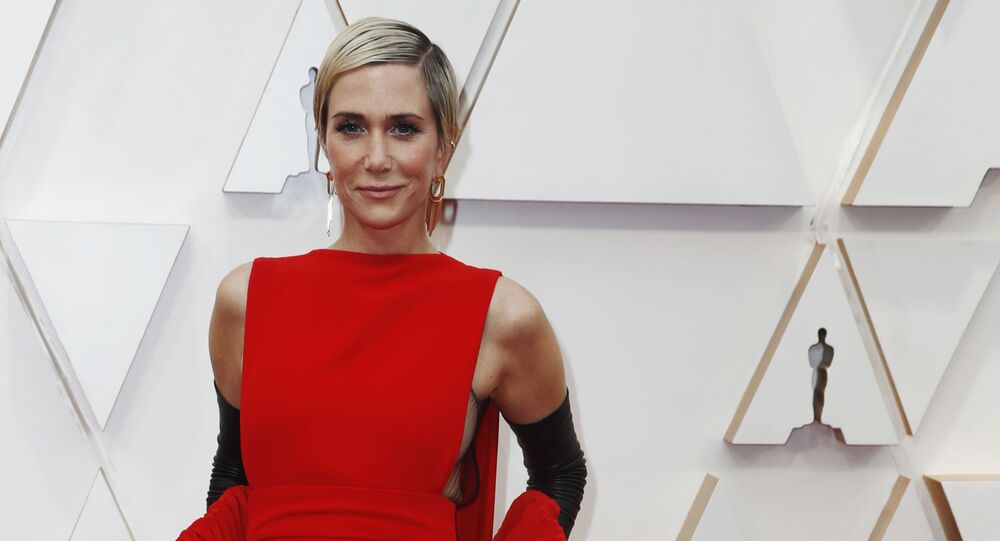 It’s the most prestigious film award in the world so if you are attending it, let alone presenting an award or are nominated, you must, you simply must look gorgeous. It can be a typical tuxedo and a evening dress or one may go with something extravagant. If you choose the second option, the main rule is don’t overdo it!

Kirsten Wiig presented an Oscar for best production design and costume design, but it felt like she won an Oscar herself as the actress or rather her outfit became the topic of heated online debates.

The 46-year-old, who was nominated in 2012 for best original screenplay, appeared in a red dress with huge ruffles on each side and long black gloves.

kristen wiig. in THIS dress. nothing left to say#Oscars pic.twitter.com/oT4MA1DN7C

​Judging by the most popular guesses, the star of Ridley Scott’s the Martian is a big fan of Italian cuisine…

Kristen Wiig looking like a lasagna noodle at the #Oscars pic.twitter.com/dzk4IeqTOa

​Other netizens thought that she's a fan of Japanese art and anatomy.

#KristenWiig looks like a science diagram for the cardiovascular system #oscars pic.twitter.com/ke2z0NObgv

​Still others thought the actor to be a fan of Disney’s animated film the Mermaid or some other sea creatures.

​Here is a winner of the no comment section.

​Wiig appeared on stage with her friend and SNL alumni Maya Rudolph and the duo made the audience burst into laughter after they said they can "do more than comedy".

The audience and social media users were so impressed by the duo that people are now calling on the Film Academy to make Wiig and Rudolph host next year’s ceremony.

​For a second year in a row the most important film award ceremony did not have a host. Different celebrities appeared on stage to announce nominees and winners. The host-free ceremony was the result of a 2019 scandal when then-confirmed host Kevin Hart found himself in hot water over jokes about the LGBT community he made in the past.

The Academy then pressed the comedian to apologise or stand down and Hart went with the second option. "I passed on the apology. The reason why I passed, cuz I’ve addressed this several times. This is not the first time this has come up. I’ve addressed it. I’ve spoken on it. I’ve said where the rights and wrongs were. I’ve said who I am now versus who I was then", Hart said in a post on Instagram.

Despite the obvious concerns about how the ceremony would do without a host, according to ratings the 2019 Oscars did good and so the organisers decided to repeat it and rumours say that this hostless streak is here to stay.