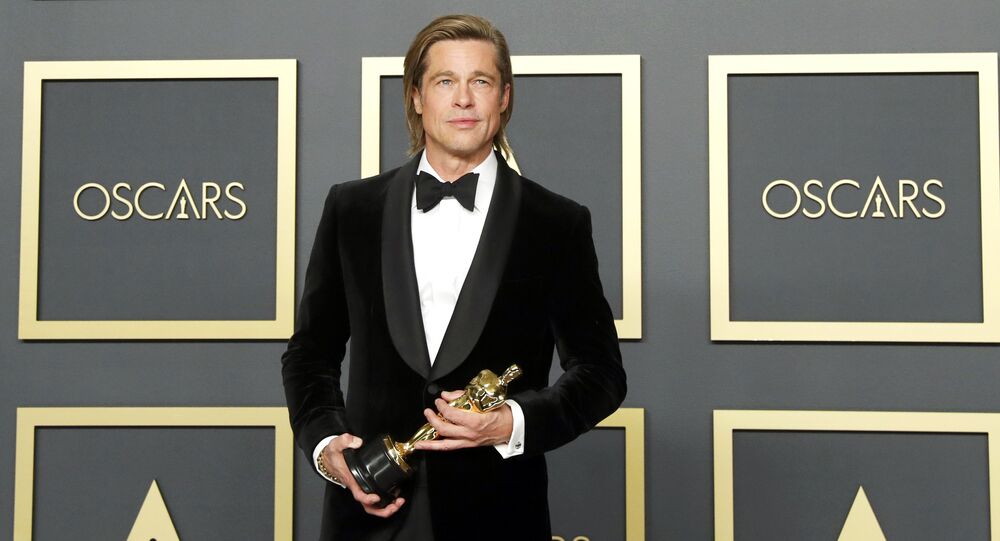 The 56-year-old won best actor in a supporting role for his part as an aging stuntman in Quentin Tarantino’s Once Upon a Time in… Hollywood. In his speeches at recent film awards Pitt entertained the audience by joking about his role, fellow colleagues and private life, but this time he decided to touch on serious matters.

Hollywood star Brad Pitt has been criticised for a joke about Donald Trump’s impeachment trial in his acceptance speech at the Oscars. The 56-year-old star took a jab at the US Senate for not subpoenaing John Bolton, a former member of the Trump administration, who served as national security advisor. "They said I have 45 seconds, which is 45 seconds more than the Senate gave John Bolton this week. I’m thinking maybe Quentin [Tarantino] does a movie about it. And in the end the adults do the right thing", Pitt said.

Some netizens didn’t appreciate this comment, with some saying the actor should stick to acting and leave politics to experts.

Hey Brad, it wouldn’t have mattered if Bolton did testify. Keep to the acting and leave the law making to the law makers.

I wanted to watch to see Brad Pitt win. I hate that he had to bring politics into speech. Just a disappointment. I look forward to the Oscars my super bowl. Just bummed.

Others accused the actor of using his speech to express his political views.

Everyone is sick of entitlement actors voicing their liberal garbage! Brad Pitt is an actor he’s not a veteran, nurse, cop, doctor, fireman or any kind of leader or hero. Accept your award and go home! How hard is that to do!!

pretty sad when someone in the "limelight" has to push his "beliefs" onto people...grow up!

​Some reminded the actor that the House of Representatives did not allow the Senate to question Eric Ciamaramella, who is reportedly the alleged whistleblower that filed a complaint against President Trump that started the impeachment proceedings.

The House of Representatives did not give the Senate an opportunity to question Eric Ciaramella for 45 seconds. pic.twitter.com/aFgzM7fiLP

​A few netizens said that the star’s joke had ruined the show and they quit watching it.

I really wanted to give The Oscars a chance this year, but alas he had to go there so I stopped watching. So over it.

Way to start the show by alienating 1/2 the country. Couldn’t change the channel fast enough.

​Others were downright angry and said they no longer love the actor. One user wrote: "I thought he had brains as well as looks. What a disappointment".

I was a fan of Brad Pitt. Not anymore, after his speech receiving an Oscar. He said “I only have 45 seconds but that’s more time than the Senate gave John Bolton”. Brad we don’t need another Hollywood insider giving us his Democrat opinion. Take your trophy and go home.

Screw Pitt!! I will never watch another of his Movies! I thought he was a bigger person than this!!

​Pitt won the Oscar for best supporting actor beating out such Hollywood heavyweights as Al Pacino, Anthony Hopkins, Tom Hanks, and Joe Pesci. The 56-year-old recently revealed he personally writes his speeches after rumours emerged that the actor resorted to the help of speechwriters, who helped him pen down some of the jokes he made during recent film awards. Pitt insisted he wrote down all the speeches although he admitted that he was helped by “very, very funny friends”.

"Historically, I’ve always been really tentative about speeches, like, they make me nervous. So this — this round, I figured if we’re going to do this — like, put some, like, some real work into it and try to get comfortable, and this is the result of that. I definitely write them. I have some funny friends. I have some very, very funny friends that helped me with some laughs, but, no, it’s, you know, it’s got to come from the heart", Pitt said.