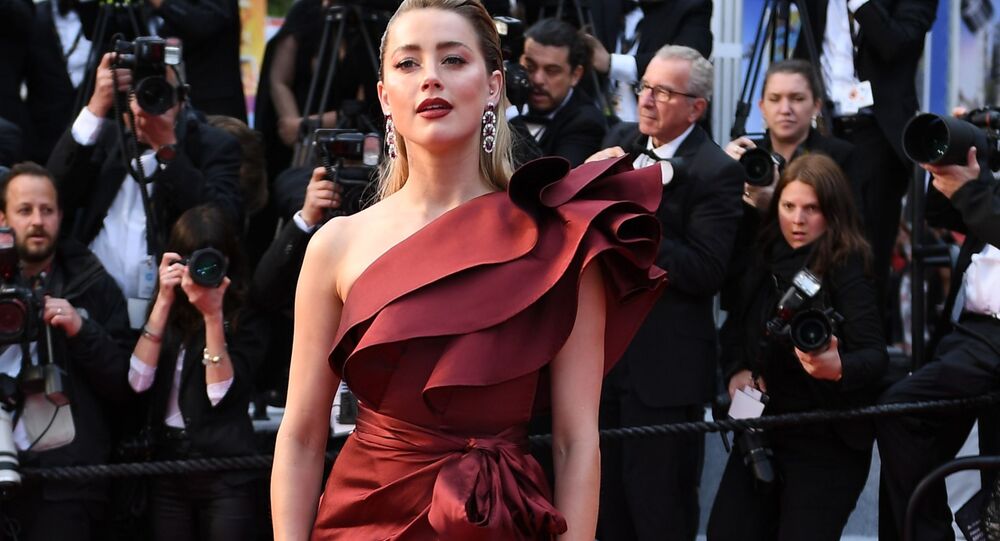 The Hollywood star shocked the public in 2016 when she claimed that she'd been the victim of domestic violence, alleging that her husband beat her and tore her hair. Depp refuted the accusations and claimed that he was innocent. For a long time, however, it seemed that the public was on Amber Heard’s side…

Social media users chastised Hollywood star Amber Heard for physically abusing her ex-husband Johnny Depp after the 33-year-old actress posted a new photo on her Instagram. The beautiful suit the young woman was wearing in the fresh photo was not enough to placate the anger of netizens, who accused her of hypocrisy and branded her 'savage' after the Daily Mail published a tape, where the actress admitted to hitting her husband.

Oh you know, just a quick sparkle moment to zhuzh it up!

While there have been some positive replies to the post, most netizens unleashed a barrage of criticism at the Hollywood star, who is also a human rights activist, with one calling her "savage". "We won’t forgive you for what you have done", wrote one user. "She acts like she did nothing wrong", wrote the other user. "Somebody buy this girl her tent so she can finally open her circus" wrote the third.

Other netizens spoke of media hypocrisy when it comes to coverage of news when men become victims of domestic of abuse and lamented the fact that the actress was allowed to be at the upcoming Oscars awards ceremony.

An online petition calling on Warner Brothers and DC Entertainment to remove Heard from the movie Aquaman 2 has been launched following the publication of the audio clip where Heard and Depp speak at an informal therapy session. The petition has already received over 163,000 signatures.

During the conversation Heard, who is an advocate for women’s rights and an outspoken supporter of equality, admits that she "did start a physical fight" with her husband.

During an argument, Depp mentioned that the actress severely injured him when she threw a bottle of vodka at him, which broke and cut the tip of his finger. Heard replied: "You can please tell people that it was a fair fight and see what the jury and the judge thinks. Tell the world, Johnny, tell them Johnny Depp, I, Johnny Depp, a man, I’m a victim too of domestic violence... And see how many people believe or side with you."

Depp also told his spouse in the audio clip that when their arguments intensify and lead to insults and physical altercations, the two should go to their corners and be alone for some time, as he fears that otherwise, their struggle may lead to a divorce or that the two may actually kill each other. To that, Heard replied:

Johnny Depp and Amber Heard tied the knot in February of 2015, but 15 months later Heard filed for divorce, citing irreconcilable differences, accusing Depp of physical assault, a claim he denies. After Heard penned an op-ep in The Washington Post where among other things she spoke about being a victim of domestic violence, Depp filed a $50 million defamation lawsuit against his ex-wife and claimed he himself was a victim of domestic violence.