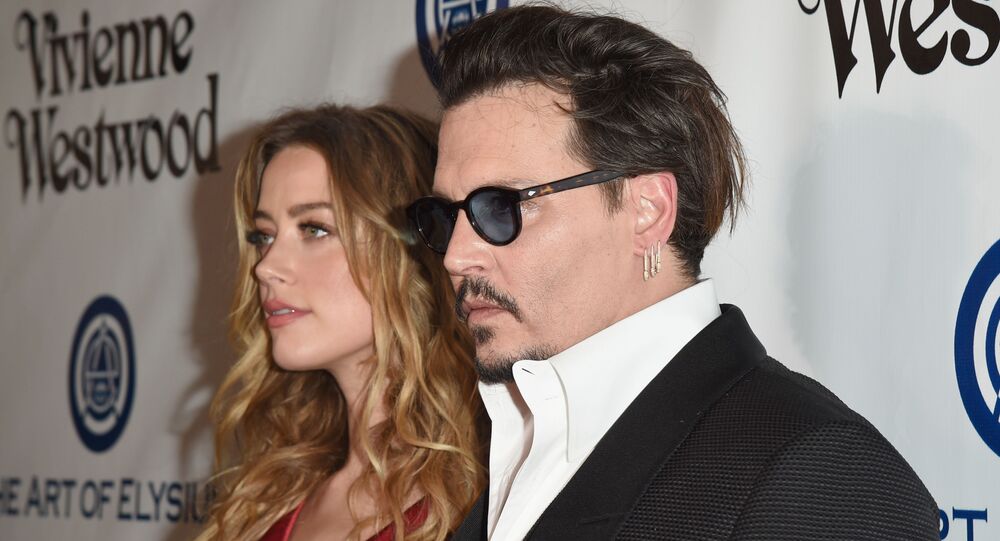 The happy couple tied the knot in February of 2015, but 15 months later Heard filed for divorce citing irreconcilable differences, accusing Depp of physical assault, a claim he denies. The 56-year-old filed a $50 million defamation lawsuit against his ex, saying she is not a victim of domestic abuse, but a perpetrator.

Furious netizens have unleashed a barrage of criticism at Hollywood actress Amber Heard, following the publication of an audio where the 33-year-old star of Aquaman admitted to hitting her ex-husband and Hollywood star Johnny Depp.

The audio filed obtained by the Daily Mail is an informal therapy session during which the couple is trying to sort out their relationship.

© REUTERS / Suzanne Plunkett/Files
Amber Heard’s Father Reportedly Threatened to Shoot Johnny Depp
During the conversation Depp told his then wife "you punched me", to which she replied: "I'm sorry that I didn't, uh, hit you across the face in a proper slap, but I was hitting you, it was not punching you. Babe, you're not punched".

In the ensuing argument Heard, who is a human rights activist and outspoken advocate for women’s rights, admits that she "did start a physical fight".

Depp then tells his spouse that when their arguments intensify and lead to insults and physical altercations the two should go to their corners and be alone for some time as he fears that this may lead to a divorce or that the two may actually kill each other.

After the audio file was published, the hashtag #JusticeForJohnnyDepp started trending on Twitter with users saying Amber Heard, who spoke about equality, should be jailed.

According to Depp’s defamation suit, the actress reportedly put a cigarette out on his face and threw a bottle of vodka at him, which broke and severed his finger.

Amber Heard preaches equality.
And because of equality she deserves to go to jail.
#JusticeForJohnnyDepp pic.twitter.com/rxkji495Jf

Amber Heard needs to be in jail she publicly shamed and humiliated Johnny and proclaimed herself the victim and Johnny the villain. Poor Johnny Depp went through tall of that behind close doors. Modern feminism sucks. I love you Depp we are all behind you. #JusticeForJohnnyDepp pic.twitter.com/zYJib3FA9y

​Netizens also spoke about the hypocrisy of the media, who chastised Depp when Heard accused him of physical violence, but paid no attention when it turned out that the actress herself was guilty of it.

The media when a man gets abused #JusticeForJohnnyDepp pic.twitter.com/YCcLApX2Ep

Feminists and the mainstream media when they hear Amber Heard was the abuser not Johnny Depp. pic.twitter.com/5tyDZwfaEw

​Other netizens received the news with joy, saying the report would clear Depp’s name and expressed support for the Hollywood star.

we are with you man #JusticeForJohnnyDepp pic.twitter.com/ZDB3eQVpAa

​Still others joked about Depp escaping prison, a reference to Captain Jack Sparrow, a character the actor portrayed in the Pirates of the Caribbean saga.

Amber Heard, this is the day that you will always remember as the day you almost caught Captain Jack Sparrow !! #JusticeForJohnnyDepp pic.twitter.com/kFz5h86Mid

​One netizen claims he or she knows the origin of Elon Musk’s weird dance. The tech visionary dated Amber Heard following her divorce with Johnny Depp.

A spokesman for Amber Heard has accused Johnny Depp of leaking the audio file and said the actor is trying to victim-blame the 33-year-old actress.

“Anyone familiar with the dynamics of domestic abuse would immediately recognise what is really going on here. For Mr Depp, who lived and lives in an echo chamber of his own making, to try to twist this private conversation to suggest either that he didn't abuse Ms Heard or that she somehow deserved it is nothing more than the latest misogynistic effort at victim-blaming".

Amber Heard filed for a divorce in May of 2016 and accused Depp of domestic violence. In August of the same year, the couple reached a $7 million settlement, which said the marriage was bound by love and there no intent of physical or emotional harm. However, after Heard penned an op-ep in The Washington Post where among other things she spoke about being a victim of domestic violence, Depp filed a $50 million defamation lawsuit against his ex-wife.

Although he was not mentioned by name in the article, Depp claimed that Heard implicated him as details of their divorce frequently appeared in the media. The actor dismissed the allegations made against him and said Heard not only fabricated evidence against him, but was herself the perpetrator of violence.