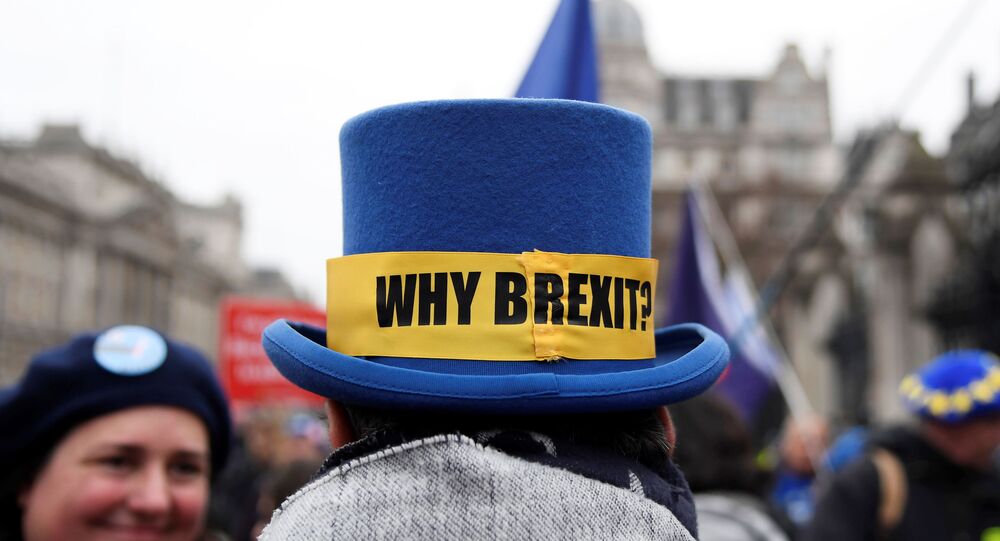 From 'Freedom!' to 'It's All Sh*t From Here': Netizens Divided on Brexit Day

After 47 years in the European Union and its predecessor organisations, Britain is set to wade into a post-Brexit future on Friday, 31 January, putting behind it a protracted period of uncertainty that had haunted the country since the EU withdrawal referendum on 23 June 2016.

Britain’s exit from the European Union will finally take formal effect this Friday, on 31 January, at 11 p.m. London time, which is midnight in Brussels, the site of EU headquarters, ending a political battle over Brexit in the UK that has dragged on for more than three years.

The June 2016 EU referendum was closely fought, with 52 percent voting to leave the EU and 48 per cent voting to remain, in a ballot that cut across party and ideological lines.

There’ll be rejoicing in some quarters, and sorrow in others on Brexit day.

As some in Britain perceive leaving the bloc as an assertion of sovereignty, others believe it will end their right to freely work and live in the 27 EU countries and disrupt ties with a sprawling free-trade zone.

As Britain and the EU go their separate ways, sentiments on social media have likewise been split. Many are enthusiastically celebrating the occasion.

We have finally left the sinking ship of the terrifying European superstate after 30 years of struggle. Thanks to the strength of the British people, Britain is free and independant once more 🇬🇧 #BrexitDay pic.twitter.com/BqtBKvvgl7

🎶🎵There'll always be an England.
(And Scotland, Wales and Northern Ireland)🎵🎶 pic.twitter.com/O3Ht8YvSoW

For those who voted remain, Brexit day brings sorrow.

Happy #BrexitDay United Kingdom. It's all shit from here, but hey, YOU voted for it.

Meet the new boss, same as the old boss. https://t.co/BBpFWiP13t

Here are Brexiters jeering and mocking the EU. And in contrast, here’s Brussels, main square lit up in Union Jacks, to say goodbye to us. Who’s the bigger person? Who’s got class? Who’s been graceful? It’s certainly not us. #BrexitDay pic.twitter.com/G0e5WRcy4i

Stop telling Remainers to ''Get behind Britain''

If I get behind a car to help it drive off a cliff, I hate the people in that car.
Anyone who loves the people in the car, would be shouting "Hey driver...CLIFF!" right until we reach December.

We leave the EU at 11pm tonight. I really don't want to. I was born at a time when the UK was in the EU & I feel as European as I do English. I really am saddened by today. I want that on record. #BrexitDay #SadDay pic.twitter.com/2tBBiEAjRJ

​After Britain formally exits the EU on 31 January, a transition period will last for the rest of 2020, during which free trade and free movement between Britain and the EU will continue.

The United Kingdom will remain within the bloc’s customs union and single market, abiding by EU rules. During this period negotiations will take place between the UK and Brussels to negotiate a complex new relationship embracing not only trade but a host of other contentious issues.

While critics have warned that 11 months is not nearly enough time for Boris Johnson’s government to achieve a deal with the EU, the Prime Minister has ruled out any extension of the transition period.