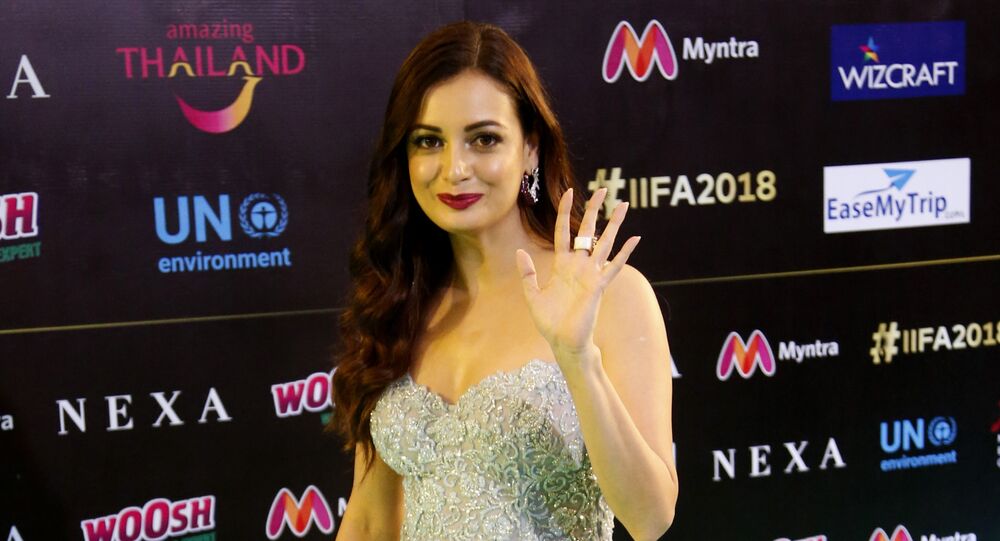 New Delhi (Sputnik): Bollywood Actress Dia Mirza, who was once crowned with Miss Asia Pacific 2000, recently became UN Environment’s Goodwill Ambassador for India. She has been actively working on social causes while continuing to have a presence in the world of fashion.

The 38-year-old actress Dia Mirza, while addressing a session on the “Climate Emergency” at the ongoing Jaipur Literature Festival, got emotional and broke down on stage during her speech.

The actress was in tears and said in a feeble voice, “Don’t hold back from being an empath. Don't be afraid of shedding your tears. Feel it, feel the full extent of everything. It's good. It gives us strength. It does. And this is not a performance.”

Mirza also refused to take the tissue offered to her by volunteers and said she doesn’t need paper while subtly underlining her cause on stage.

#WATCH Actor Dia Mirza breaks down while speaking at the 'climate emergency' session during Jaipur Literature Festival; she says, "Don't hold back from being an empath". (27.1.20) pic.twitter.com/fyAgH3giL9

Later, when asked about her emotional outburst, the actress said that she was disturbed by the death of NBA player Kobe Bryant, whom she used to follow. The American basketball legend died, along with his daughter, Gianna Maria-Onore, and seven others, in a helicopter crash in Calabasas, California, on Sunday (26 January).

However, her resulting emotional outburst failed to tug on the heart-strings of the trolling brigade, who went all out and mocked the actress, calling her “Indian Greta” and questioned her lifestyle, sharing pictures of the wooden flooring of her house and leather jackets.

We need our own #Greta .
All for her acting(even though it looks fake).

This hypocrite do not wanna talk about the second most pollutant Industry being Fashion.

Besides, has the smiling host asked her, how many cars does she own ?

And please spare the animals, I need them for my jackets pic.twitter.com/1AfnlbXwrx

She stole my style pic.twitter.com/QnWbn5Bvbn

I don't need paper because I need to save trees for my flooring. 😎 pic.twitter.com/pL7TsmOOdP

​The annual Jaipur Literature Festival is held in the capital city of Rajasthan state, where a large number of writers, thinkers, humanitarians, politicians, business leaders, athletes and entertainers assemble and engage in thoughtful debate and dialogue.

The actress, who made her Bollywood debut on the big screen in the 2001 release “Rehna Hai Tere Dil Mein”, has given a number of hit films like “Dus”, “Lage Raho Munnabhai” and “Sanju”.  She was recently given the prestigious role of National Goodwill Ambassador by the UN to further spread the message on priority areas including clean air, clean seas, wildlife protection and climate change. The actress last worked in the film "Shoebite" in 2019 and "Sanju" in 2018. She has actively worked for Cancer Patients Aid Association and Spastics Society of India, and spread awareness on HIV and the prevention of selective abortion targeting females with the government of Andhra Pradesh.