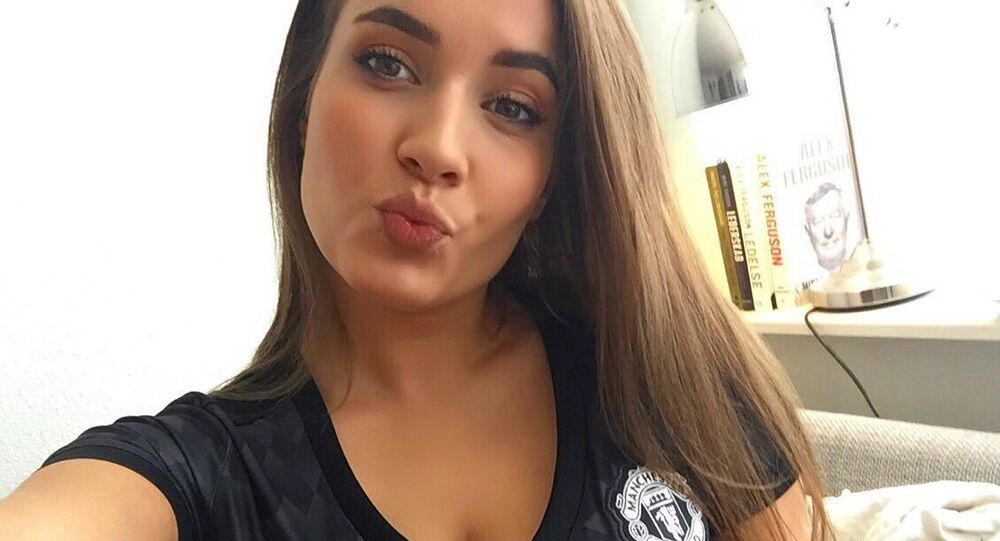 The Copenhagen-based stunner, who is originally from the Faroe Islands, has built up her social media profile on three pillars: her outstanding physique, racy photoshoots, and passion for the star football club from England. Although this season can hardly be called perfect for the Reds, she is still ready to bare it all to support her favourites.

Instagrammer Katrina Maria, who has defined herself as a Manchester United supporter and thereby amassed over 70,000 followers, opted for a pink low-necked replica of a Reds’ shirt to back the team ahead of thrashing Tranmere. Whether it turned out to be a lucky charm or it was because of the fact that Man Utd’s rival was from a lower league, her idols won 6-0.

The beauty, dubbed by the British media the team’s “sexiest fan”, however, did not seem so sure before the battle at Prenton Park and shared her doubts with netizens following the club’s painful defeats against Liverpool and Burnley.

“I think this could be a hard game for us, the pitch at Prenton Park has a tricky surface which could make it difficult for our players. But I hope our players come prepared! A win today would really help our spirit after two defeats. Let’s go United”, she wrote in the caption.

Judging by her feed, the question “Will we win?” had been haunting her for some time.

Despite her nervous tone, her game day post has gained over 5,000 likes.

Some shared their own predictions and voiced support for the Red Devils.

“I think we’ll win but at the same time i wouldn’t [sic] be surprised if we draw or even lose. United are very unpredictable these days so let’s not get our hopes too high but i think we’ll win this one. Love United. Love u [sic] even more”, one commenter wrote.

Others seemed to be distracted by the volunteer sports analyst’s physical assets.

“I would rather watch you then United”, one posted, while others could only muster leaving heart and fire emojis.

Despite the previous disappointments, Manchester United snatched the lead just 10 minutes into the game thanks to Harry Maguire. Diogo Dalot, Jesse Lingard, Phil Jones, Anthony Martial, and Mason Greenwood cemented their smashing victory – and gave their fan a reason to share a celebratory snap.