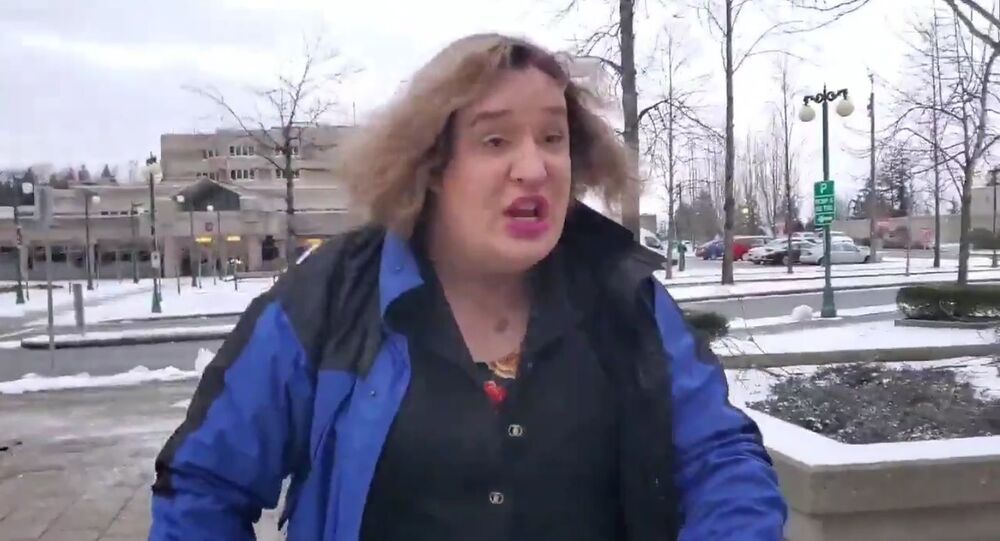 The self-proclaimed human rights advocate from Canada used to be Jonathan but now identifies as a woman, while still retaining male genitals. She has shot to fame due to her spat with a gynaecologist who refused to give her a check-up, with Ricky Gervais who mocked her, and numerous beauty salons that flat out refused to provide waxing services.

Canadian trans-person Jessica Yaniv, who insists on being addressed as a woman but has male genitals, is being probed by the Royal Canadian Mounted Police over an alleged criminal assault after she violently confronted right-wing website Rebel Media reporter Keean Bexte following a hearing on weapon charges against her.

Bexte, who shared the news about the investigation into Yaniv’s attack outside a British Columbia courthouse several days ago, insists that the feisty activist could face up to five years in prison if convicted. The journalist posted a video message on Twitter, saying that he is filing a lawsuit and referring to Yaniv as Jonathan (which was the activist’s name before she proclaimed herself a woman), as well as a predator, “who sexualises children, victimizes immigrant women and assaults reporters”. He also called on the online crowd to donate to help stop Yaniv.

YANIV UPDATE: Criminal investigation confirmed, assault charges expected, civil action being filed. Yaniv may be behind bars for up to 5 years. Full story at https://t.co/JmNsKMvAB5 pic.twitter.com/hTqdeZx2Xv

​Police confirmed to online outlet TheBlaze that an investigation into the alleged attack is underway but no charges have been filed.

In the video uploaded by Bexte on Twitter, he is heard walking up to the activist with a camera as she was leaving the Provincial Court of British Columbia after a hearing on charges of possessing an illegal weapon as he and another reporter were barred from covering the process.

Yaniv followed after the journo, who said she punched him in the back of the head, yelling, “Get away from me!”

“I’m calling the police on you”, Bexte is heard to say, with Yaniv retorting, “I don’t give a s**t”.

On that day, Yaniv also confronted The Post Millenial reporter Amy Eileen Hamm whom she claimed had taken her photographs in the women’s bathroom. Hamm said she entered the bathroom but “quickly exited” after spotting Yaniv there. Police searched her phone and found no photos of the trans-activist.

Yaniv, however, continues to insist that the woman assaulted her.

I'm upset. I feel dirty and disgusting. @preta_6 sexually assaulted me on Monday AT THE SURREY @BCProvCourt, and @SurreyRCMP and @BCSheriffs did NOTHING!! They are investigating that, but put this BITCH behind bars. She HURTS PEOPLE and the #LGBTQ Yes I am absolutely furious!

​Yaniv is now facing six months in prison for weapons charges that stem from a livestream YouTube debate in August. The activist flashed a stun gun, demonstrating knowledge that the weapon was prohibited in Canada. Police soon arrested Yaniv and searched the trans-activist's house, where they also found prohibited pepper spray.

This is the latest edition to her history of cases, including the infamous “Scrotum Waxing” scandal. In 2018, she launched half a dozen complaints against beauty salons over their refusal to remove hair from her body, which concerned mostly genital waxing, but also featured two requests to remove hair from her arms and legs. They were dismissed by a tribunal in October 2019 "on the basis that they have been filed for improper motives or bad faith". She was also ordered to pay $2,000 to each of the three workers who filed a defence.

"Having now heard the evidence in these complaints, I am satisfied that the pattern is deliberate and motivated by Ms. Yaniv's animus towards certain, non-white, immigrants to Canada and, in particular, members of the South Asian and Asian communities", its ruling says.

On top of that, during the hearings, lurid details emerged about Yaniv’s obsession with teenage girls’ menstruation and menstrual products.

© Photo : jordan.b.peterson/instagram
Jordan Peterson Weighs in on 'Impossible' Jessica Yaniv Controversy After Ricky Gervais Joke
She has started another battle against one of Vancouver's beauty salons recently, claiming they refused to wax her legs. The activist launched a complaint with the British Columbia Human Rights Tribunal, the broadcaster CTV News revealed in January.

In 2019, Yaniv also launched an offensive against a gynaecologist who refused her treatment, which caught the attention of acclaimed English comedian Ricky Gervais. He quipped: “It's disgusting that a qualified gynaecologist can refuse to check a lady's c**k for ovarian cancer. What if her b**locks are pregnant? She could lose the baby. I'm outraged”, which enraged Yaniv who lambasted the comedian on Twitter.