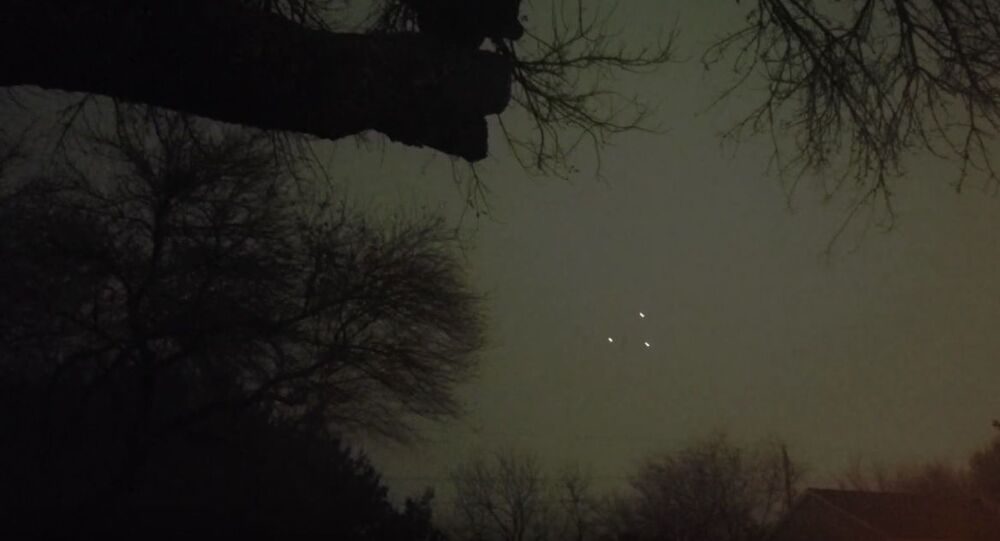 From an enigmatic shadow allegedly lurking around a SpaceX rocket to cigar-shaped unidentified flying objects spotted across the US, 2019 provided alien hunters and conspiracy theorists with a lot of material to process. This year has already given them a reason to grab their tinfoil hats too.

A clip showing what looks like an enormous triangle-shaped UFO over Houston, Texas, on New Year’s Day has heated up the imagination of online commenters. The video, shared by Stephaine Westerfield, shows three lights apparently dancing in the night sky and maintaining formation while fireworks (or gunshots?) are heard in the background. The voice of what sounds like a child is also heard asking: “What are those?”

“Not sure what these lights are”, Westerfield noted in the caption.

Although the authenticity of the video could not be confirmed, it was immediately caught up by conspiracy channels. Some YouTube users rushed to offer their opinions on what it could be.

“Nice catch. The UFO(s) look legit to me. Too distant and bright to be 3 drones”, a user under the handle Bruce Wayne suggested, while another commenter claimed that it is one of the large triangle craft “that are being seen all over the world”.

Another YouTuber shared that it was not the only strange sighting spotted that day as, according to him, there was one light that looked like a star and moved slowly before suddenly turning bright yellow.

“Then there’s another 1 that does the same thing nearby the first one. Then, there’s 3 more to join it. In total I counted 5”, he noted in the comments.

A military-related conspiracy theory also popped up eventually, as one of the commenters claimed that it was a TR-3B surveillance plane, rumoured to be developed under a black project, which is also triangular in shape.

However, many had a more mundane explanation, saying it was just three drones in a triangle formation or Chinese lanterns.

© CC0
UFO Sightings to Skyrocket in 2020, Warns Conspiracy Theorist
The video emerged shortly after a YouTube user uploaded a clip of a triangular object hovering in the sky above a town in upstate New York in the US, which he believed to be a fascinating UFO sighting.

Given its tremendous altitude, the object was supposedly huge, as the person who recorded the video claims that they saw a red “orb” type object being dropped from the triangular craft just before they started filming. However, whether or not the video is genuine cannot be confirmed.