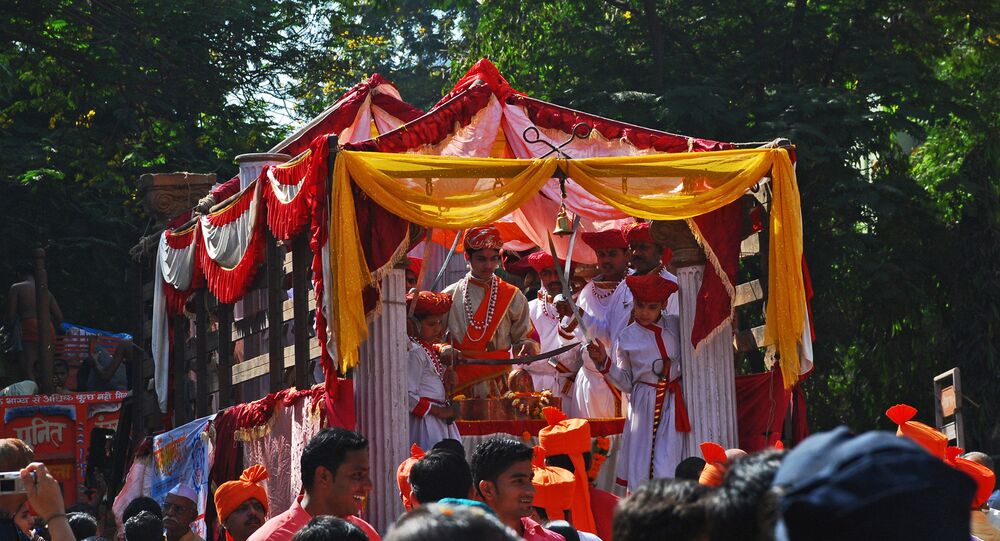 New Delhi (Sputnik): Indians, as people in other parts of the world, usher in the New Year in style, dancing, partying at home or clubs, or travelling to exotic locations inside and outside the country.

A section of Twitter users have come out against conventional kinds of celebrations on the eve of the New Year, calling it "aping the West and destroying Hindu traditions".

They have given a call to boycott western-style New Year celebrations and want people to celebrate it in Indian fashion, citing several spiritual festivals in India, like Gudi Padwa, which marks the New Year according to the lunisolar Hindu (Indian) calendar.

​Several netizens believe that New Year's celebrations lead to moral and cultural disasters as it results in consumption of narcotic substances, vulgarity which is against Hindu culture and also leads to accidents and "drunken driving cases".

Each small and big seller wants to cash-in on 31st Dec opportunity and they use all possible business tactics to sell their products.
The target group is the youth. Due to lack of Dharma education youngsters follow the West blindly.#MyNewYearIsHinduNewYear @Nationalist_Om pic.twitter.com/e3XXz1P2tP

👉Consumption of alcoholic drinks is very high on the #NewYearsEve.
Many people consume drugs.

👉Due to this, there is an increase in incidents of assaults, rapes, etc.

​Meanwhile, some say they have been celebrating New Year for a long time, and now all of a sudden some fringe elements have attached religious connotations to every social celebration.

Stupid hashtag from @BJP4India and its IT cell#MyNewYearIsHinduNewYear

​According to the lunisolar calendar, Gudi Padwa is observed in the month of Chaitra (first month of the year as per the Hindu calendar) which is considered an auspicious day that marks the New Year. It celebrates the onset of spring and the reaping of Rabi crops in western parts of India.

Gudi is believed to cast away evil, invite happiness and prosperity into the house. It also symbolises Lord Rama’s victory over Ravana.

Hindus decorate their house, wear new clothes, distribute sweets among themselves and even take part in processions to mark this significant day.

Some Hindu groups have also been campaigning against St. Valentine's Day and several incidents of vandalism were reported on the occasion in the past.