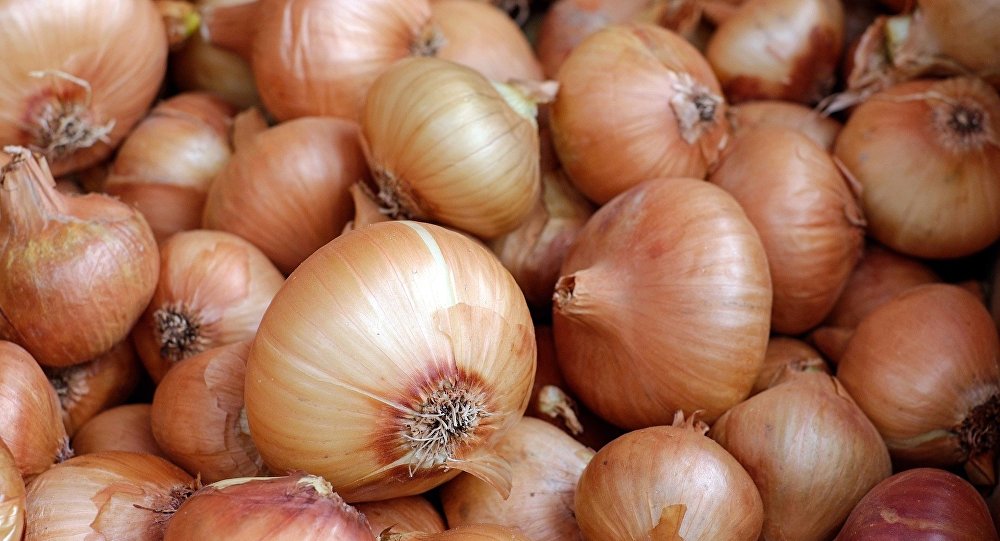 New Delhi (Sputnik): Since January, retail inflation in India has registered an almost three-fold growth to 5.54 percent. Food inflation too crossed 10.01 percent in November in comparison to 7.89 percent in October this year.

At a time when poor consumer sentiments have already taken a toll on the Indian economy, exorbitantly high onion prices seem to be set to take the fizz out of New Year celebrations.

High onion prices have dented poultry sales as New Year's Eve approached, because the vegetable in question is a key ingredient in Indian chicken and mutton dishes.

With poultry retailers having already witnessed up to a 60 percent dip in sales, a section of agriculture experts see no respite from high onion prices in the offing until the end of January.

Mohsin Ali, who runs a poultry retail outlet named Maq Foods at the Ghazipur poultry market on the outskirts of the Indian capital New Delhi, claims the business is at its lowest ebb.

Those in the poultry farming business point at yet another factor regarding muted sales.

“Unprecedented cold in northern India has impacted chick breeding, as the farmers do not have advanced technology to conserve the chick at an adequate temperature. This has impacted retail market supply”, Sundar Chauhan, the owner of Rudra Agro Live Stock, says.

In India, the meat market is dominated by the unorganised sector. Neighbourhood meat shops account for almost 90 percent of the market.

According to a leading market research company IMARC, the Indian poultry market was worth $24.6 billion in 2018. It is projected to expand to $61.1 billion by 2024, registering a growth of 16.2 percent from 2019-2024. India is the world’s largest producer of eggs and broiler meat.

Earlier this month, the Narendra Modi government had to reduce the stock holding limit of onions to 2 tonnes from 5 tonnes for retail traders as a measure to bring down prices.

The price of onions skyrocketed in September of this year. The vegetable is a staple in the diet of most households across the country and used in almost every variety of meat dishes in the country.

The onion shortage on the domestic market has been caused by a delayed harvest due to heavy rains in different parts of the onion-sowing States during the crucial July and September period, destroying a large chunk of crop.

With the onion prices mounting, India decided to import the commodity from Egypt, Afghanistan, and Turkey.

Onion Prices and the Future Ahead

There is, however, no let-up in retail prices even with the arrival of consignments. Some experts anticipate that prices may not come down until the end of January.

Choudhary Pushpendra Singh, chief of a farmer rights organisation Kisan Shakti Sangh says: “The Indian government has decided to import 120,000 tonnes of onions. Of this, contracted imports of 50,000 tonnes from Turkey, Afghanistan, and Egypt have already started coming in. However, this is way too low compared with the daily demand of almost 60,000 tonnes".

Until the new crops come in by the end of January, there won’t be any let up in onion prices, he adds.