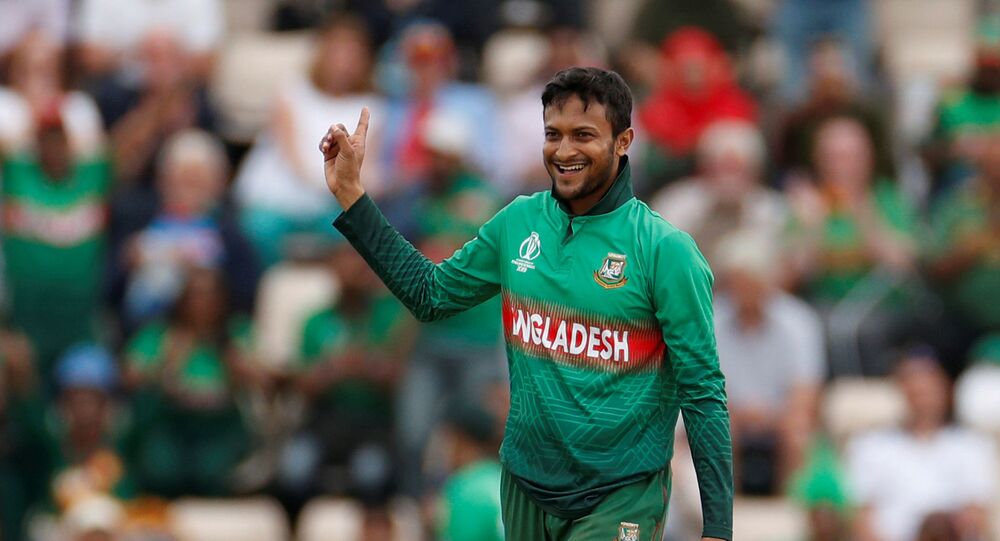 New Delhi (Sputnik): Shakib Al Hasan, the Bangladesh Cricket team captain and world No.1 ODI all-rounder, has been banned from playing all forms of cricket for two years by the International Cricket Council (ICC) for “failing to report corrupt approaches".

Ahead of the much-anticipated Bangladesh team's tour to India, the news of Test and T20 captain Shakib Al Hasan being banned from playing cricket for two years has led to a flurry of reactions on social media from fellow cricketers and fans.

Bangladesh Prime Minister Sheikh Hasina came out in support of Shakib over the suspensions, saying there is not much she can do about the ICC's decision. Still, Al Hasan has the support of the Bangladesh Cricket Board since he made a mistake and he realises that.

Indian commentator Harsha Bhogle called the announcement a "terrible and huge setback for Bangladesh team". He said Shakib was the highest-earning cricketer on the team, and he was in the best position to set an example by reporting an offer.

The 32-year-old Shakib, who has played 338 matches for his national team, was the third-highest run-scorer in the 2019 Cricket World Cup.

Former England captain Michael Vaughan, however, has criticised Shakib's behaviour, saying that a two-year ban is insufficient for a cricketer of his stature.

Former Pakistani cricketer Ramiz Raja also backed the ICC’s decision, saying the ban is a lesson to all sportsmen, as no player is bigger than the sport itself.

Shakib’s ardent fans were left fuming over the news, echoing #westandwithyou social media users are backing him and bashing ICC over its judgement, calling it "destruction of legend's career" when he was at the peak of its career.

However, some found it fishy and alleged that the ICC was serving the purpose of India as the all-rounder batsman was barred just ahead of Team Bangladesh's Indian tour.

​From the two-year ban, 12 months of that ban is a suspended sentence which will come into effect if the player fails to comply with the anti-corruption laws of the ICC.

"I am obviously extremely sad to have been banned from the game I love, but I completely accept my sanction for not reporting the approaches. The ICC ACU is reliant on players to play a central part in the fight against corruption, and I didn't do my duty in this instance," Shakib was quoted in a media release by the ICC.

Shakib’s WhatsApp chat with alleged Indian bookie Deepak Aggarwal was made public by the ICC to uphold their decision.

Shakib informed the anti-corruption unit of the world body that he did not “receive any money or rewards”, “didn't provide any information” nor act on the approaches.

He is being held responsible and punished for failing to provide the "full details of any approaches or invitations received to engage in corrupt conduct".