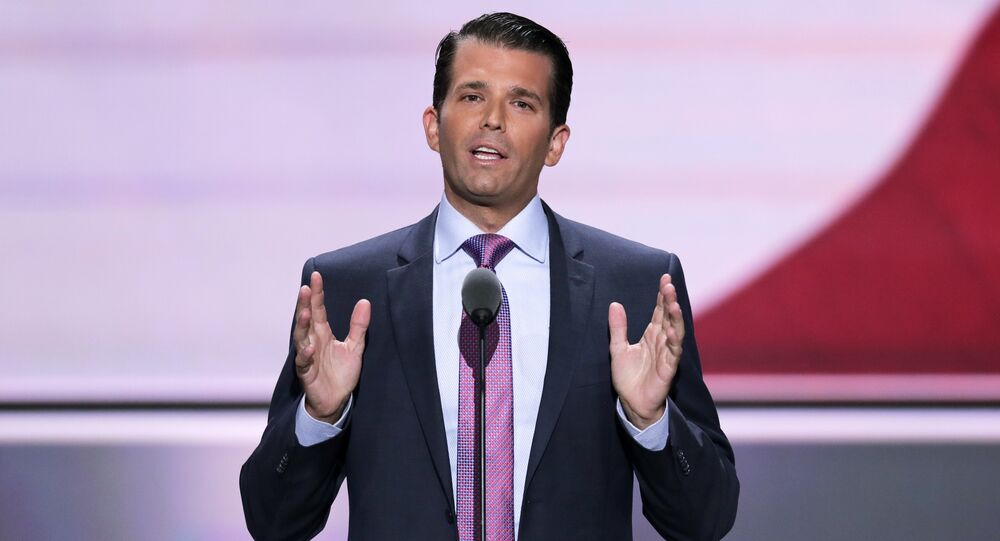 Ye and his new album, which was released on 25 October, continue to generate buzz, drawing more and more attention – from fast food restaurant chains to gamers. This time, they won the attention of President Trump’s son.

Donald Trump Jr has called Kanye West a pioneer and praised his new album in a post on Twitter. West, who actively supports President Trump, recently released his long-awaited album “Jesus is King” - and it has caused quite a stir. The rapper has been accused of ripping off the soundtrack to the popular video game Zelda, resorting to a simplistic approach towards writing lyrics, which was taunted by Burger King, and raised eyebrows when he confessed that he had asked people involved in the creation of the album not to have premarital sex in order to stay focused on their work, as well as opening up about his porn addiction.

For his part, Donald Trump Jr heaped praise on the rapper, saying “Jesus is King is the epitome of fearless creativity and 'dangerous, unapproved' ideas”.

Kanye West is cracking the culture code.@kanyewest’s new album #JesusIsKing is the epitome of fearless creativity and “dangerous, unapproved” ideas.

Leftists always try to silence those who are speaking truth. They’re waging a war on our family and culture.

Kanye is a pioneer pic.twitter.com/EmPgLqgGZJ

​The businessman was inundated with comments and his post was retweeted more than 21,000 times. Some users suggested that Trump Jr’s endorsement of West and the artist’s decision to quit rap music and pursue a career in gospel is a sign that the star is not in his prime anymore.

This tells you all you need to know. Kanye is not it anymore.

That album is a mediocre. One of his worst in my humble opinion. Trump Jr endorsing it is not a good look for Kanye.

​Other users defended the artist and urged netizens not to politicise everything.

Liberals make everything about politics. Don’t get mad when conservatives do it.

​Other users unconditionally agreed with Trump Jr, praising the artist’s talent and his desire to embrace new genres.

Amen!!!! I LOVE this album... listen to it everyday since I bought it

Next to the election of your father, I'd say it's arguably the most important cultural moments of the decade.

​Still others mocked Trump Jr’s description of the album, saying there is nothing new and dangerous in a decesion to release a gospel album.

literally nobody has ever made music about jesus before. truly groundbreaking

Lol, bold dangerous ideas like "my taxes are too high" and "I love Jesus."