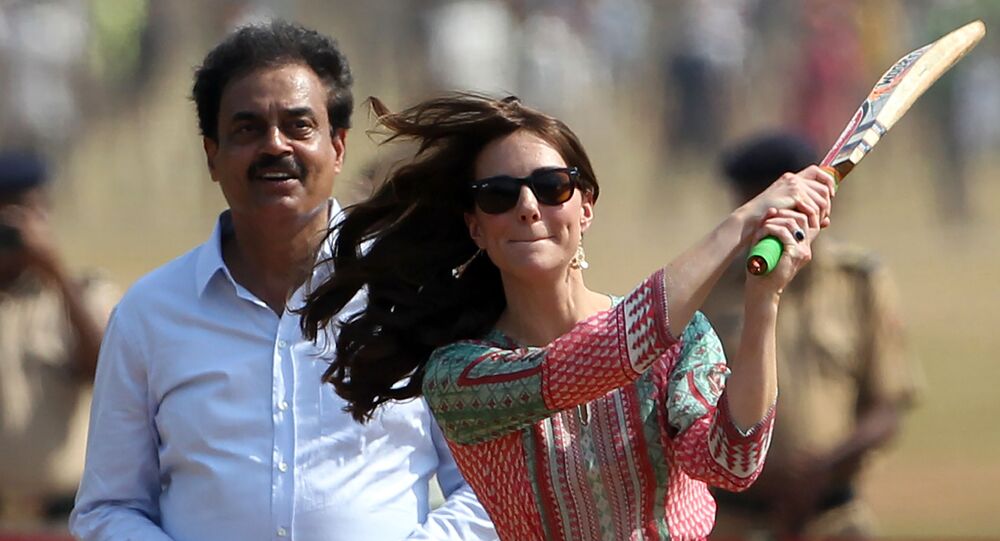 New Delhi (Sputnik): Kate Middleton was unable to contain her giggles, as she took to the cricket pitch for some gala time, and displayed her batting skills along with hubby Prince William, on the fourth day of their royal tour in Pakistan.

The Duke and Duchess of Cambridge Prince William and Kate Middleton played cricket with a group of children at the National Cricket Academy in Lahore on Thursday.

Kate geared-up for the play by sporting a high pony and sports shoes with her all-white Pakistani traditional salwar kameez, which seems to have become her dress-code for the tour of the country.

Kate can be seen grinning ear-to-ear as she faced a few balls with all the other players on the field, who also enjoyed watching her.

William, however, played more like a professional player, hitting a six after missing a ball, and was applauded by his wife who stood on the other side of the wickets.

Watch: Prince William gets a big clap from Princess Kate after hitting a six at cricket #RoyalVisitPakistan #lahore #williamandkate pic.twitter.com/njAsBYBlqi

Following in the footsteps of the Prince's late mother Princess Diana, William and Kate toured to Lahore's Badshahi Mosque, earlier in the day. It was the same mosque Diana once visited in 1991.

Kate looked cautious enough to respect Islamic traditions as she wore a scarf on her head, as is required inside the mosque. She also walked barefoot in the courtyard. The pictures were circulated on social media with people praising the duo for showing respect for the Pakistani culture and religion.

The Kensington Palace called the five-day trip the most complex tour undertaken by The Duke and Duchess to date, due to security and logistical considerations.

The royal couple’s maiden Pakistan visit is aimed to be an education-focused tour. They will have a look at the programmes empowering young people, and organisations that help ensure that the youth have the best possible start in life.