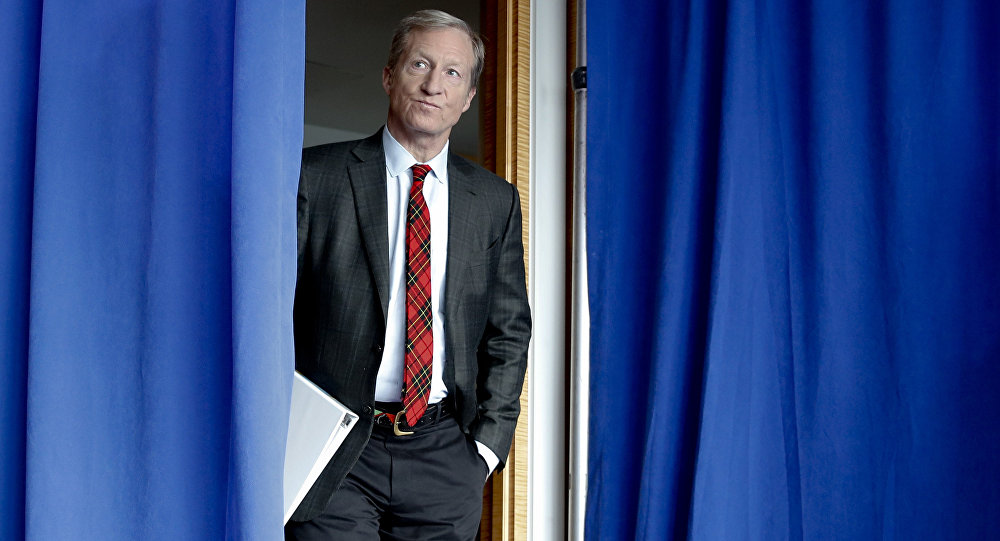 Twelve Democratic presidential candidates sparred on Tuesday at Otterbein University in Westerville, Ohio during the sixth debate night of the 2020 presidential election, with billionaire activist Tom Steyer putting in his first appearance.

Businessman Tom Steyer made his first appearance during the fourth primary debate of the 2020 presidential election cycle, and immediately grabbed the attention of moderators and netizens.

Steyer, whose wealth is estimated by Forbes at $1.6 billion, sought to address income inequality, making the case for progressive policy positions, like a wealth tax.

"I was one of the first candidates on this stage to propose a wealth tax," he claimed.

Netizens, however, zoomed in on Steyer's choice of apparel – his signature red plaid tie.

In any historical shot where the billionaire philanthropist Steyer is dressed up, it's nearly impossible to find him without his signature red tie.

As the Washington Post reported in 2013, Steyer "dons Scottish ties every day — although not those bearing the tartan of his own clan, Murray, because he said it was too ugly."

Twitter users were divided on the tie issue, with many praising this particular aspect of the contender's apparel:

To be fair, it’s a good tie

he didn't make a billion bucks blowing his money on ties!

Maybe it’s his lucky tie. It’s working for him so far.

Steve Jobs approach. Keep it simple, concentrate on other things.

If I made $1.6B while always wearing the same tie, I'd also be hesitant to take it off

​Others, like Meghan McCain, did not seem to be a fan of the plaid:

I am NOT here for Tom Steyer OR his tie! #DemDebate

Also, Tom Steyer is wearing a plaid tie, and there are limits to what we can accept in a president#DemDebate live

​Hedge fund investor Tom Steyer is the latest billionaire to set his sights on the White House, making his way onto the debate stage on 15 October thanks to a huge campaign in the early-voting states.

Several of America’s highest-profile billionaires have flirted with running for president in the past few decades, as Mark Zuckerberg was rumoured for a while to be considering a run; the late Ross Perot, a business magnate, billionaire and philanthropist, had one of the strongest showings for a third-party candidate in 1992 and 1996.