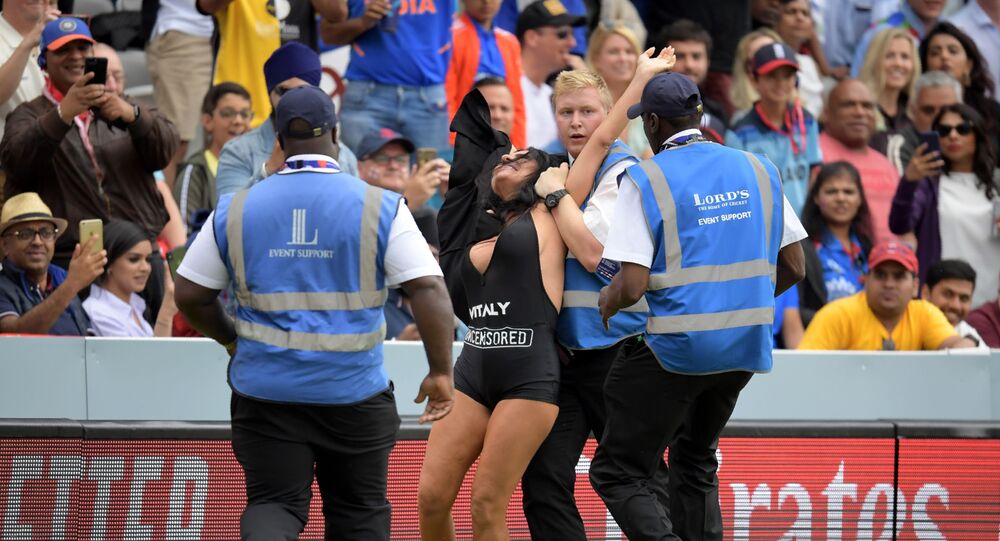 Despite the field invader’s best efforts, her foray into the game was cut short as she was swiftly intercepted by security and booted from the ground.

The final match of the Cricket World Cup between England and New Zealand took place at Lord’s in London on 14 July and was briefly interrupted when a woman wearing a swimsuit promoting an X-rated website attempted to charge into the field.

The intrusion, however, was cut short as the woman was swiftly intercepted by security before crossing the boundary.

According to local media reports, the intruder turned out to be none other than the mother of Vitaly Zdorovetskiy, a YouTube personality with over 10 million subscribers who owns the website promoted by the lady, and who is also the boyfriend of another notorious field invader, 22-year-old blonde bombshell Kinsey Wolanski.

Zdorovestkiy himself appeared to confirm that the invader was his "mom", Wolanski following suit, praising the woman as the "most bad ass mom ever".

My mom is crazy!!!!! pic.twitter.com/GuDfyM2aU2

Earlier, Wolanski performed a similar stunt, interrupting the Champions League final between Liverpool and Tottenham while clad in the attire promoting Vitaly’s website.

The Copa America final, however, proved to be a tougher nut to crack as Kinsey and Vitaly were apprehended by security and ended up in the slammer for trying to stage a field invasion.