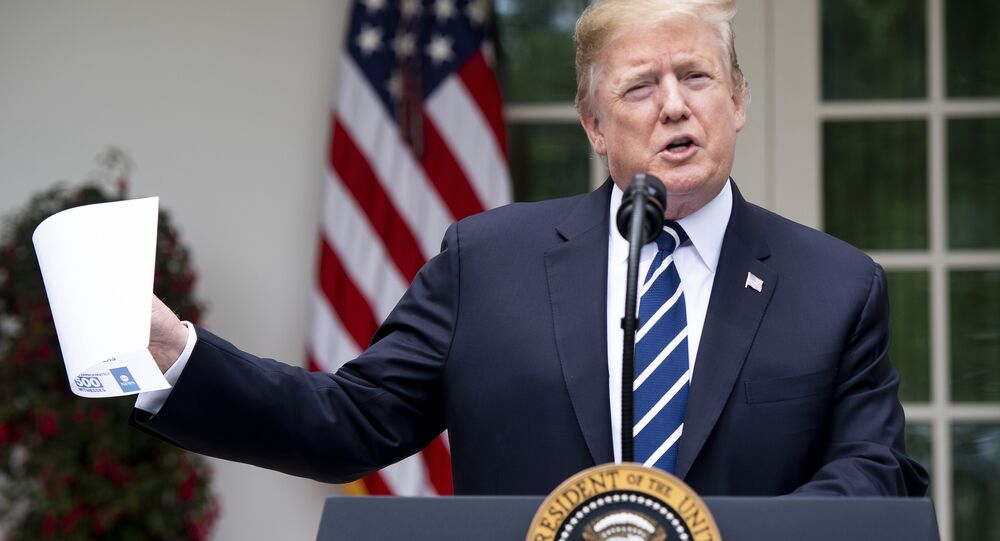 'No Achomlishments': Trump Gets Memed Over Spelling Error in Handwritten Notes

Social media users have received some new food for fodder as US President Donald Trump made an impromptu media appearance at the White House's Rose Garden after abruptly ending a scheduled meeting with House Democrats, as he was taken aback by the news about a Dem gathering convened to discuss his impeachment.

Donald Trump, a.k.a. the "stable genius", has once again found himself at the epicentre of a Twitterstorm after his handwritten notes with spelling mistakes from the Rose Garden's Wednesday presser were caught on camera by Washington Post photographer Jabin Botsford.

Upon becoming aware of a special Democrats' meeting on impeachment, he stormed out of the Oval Office after a very brief rendezvous with Democratic House Speaker Nancy Pelosi, with his notes reading, "They want to impeach me over acts that they did" and "Dems have no achomlishments".

Trump notes captured by @jabinbotsford:
“They want to impeach me over acts that they did”
“Dems have no achomlishments [sic]”https://t.co/WUGczy4y2c pic.twitter.com/ealXzJEFJM

Given the long history of his public gaffes — from mysterious "covfefe" and "hamberders" tweets to "oranges" of the Mueller report on the alleged collusion with Russia — no wonder that social media exploded with jokes and memes:

No it ain’t a Twitter typo. “Achomlishments” is handwritten by the President with the best brain. https://t.co/N9VBTFGH82

So he doesn’t slur his words. He just thinks they’re spelled that way. Achomlishments. Anonimush. Oranges. That’s just how he spells those words.

During the presser after the failed meeting with Pelosi and Senate Minority Leader Chuck Schumer, POTUS announced that he would not work with House Democrats on a $1 trillion infrastructure investment bill unless they put an end to their numerous investigations against him.

According to Trump himself, he was taken aback by the news about the Dem meeting held to discuss impeachment and told them to "get these phoney investigations over with".

READ MORE: Democrats Must 'Urinate or Get off the Pot' on Impeaching Trump — Sen. Kennedy

He also brushed off any “cover-up” allegations, reportedly brought against him by Pelosi, and stressed that he had allowed some 500 witnesses to testify during the Mueller investigation, despite having the presidential privilege option, in order to keep his administration transparent.