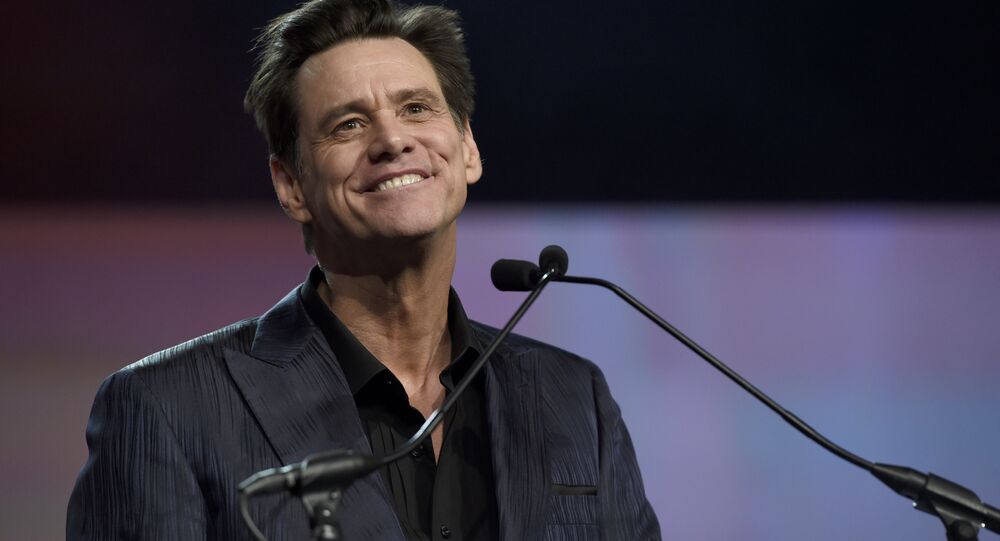 Hollywood star Jim Carrey has yet again generated exceptionally strong reactions with his latest provocative drawing that depicts Alabama Governor Kay Ivey, who just recently signed a bill in the state criminalising abortion except in cases of medical emergency into law.

Amid a pervasive debate on anti-abortion legislation in dozens of US states, including Alabama and Missouri, Jim Carrey recently tweeted a suggestive caricature depicting Governor Kay Ivey as a foetus still featuring a mother’s umbilical cord while being suctioned out of the womb with a reddish cloud that looks like blood surrounding the foetus.

“I think If you’re going to terminate a pregnancy, it should be done sometime before the foetus becomes Governor of Alabama”, the award-winning actor captioned the picture satirically.

The graphic image, which came days after Missouri passed the law criminalising abortions after the eighth week of pregnancy in the footsteps of Alabama, has drawn ire on Twitter, with one noting that by doing so, it is Carrey who has “aborted his own career”:

This is sick and wrong, @JimCarrey. Celebrating the horrific, cruel acts that rip babies apart is evil. Wishing a brutal death on someone and joking about it is monstrous.

If you are in a movie—it isn’t going to be watched. Period.

One even suggested ignoring movies starring Carrey in response:

One by one just dont watch his movies. And soon enough it will catch up.

One opted for a more light-hearted approach, writing that Carrey he is “too logically consistent and compassionate” to support murder, with another Twitterian correcting him by saying that it was not the abortion itself that Carrey was defending, but women’s right to “govern” and make decisions about their bodies.

The issue is not abortion. The issue is women’s right to govern and make decisions about their own bodies.

Her choice of the word “govern” has meanwhile also caused laughter in the comment section, with one remarking the female governor of Alabama is “fully expressing her right to govern”:

Many came up with hilarious memes playing upon left-wingers’ rhetoric on the subject, namely pro-abortion activist Alyssa Milano’s controversial stance on sex:

There were also those believing that it’s not the women’s rights that the left is trying to secure, while hordes of users argued that  Carrey’s caricature is actually conveying the opposite of the intended message:

See how inhumane abortion is, thank you Jim

One thanked Jim for providing a truly accurate account of what an abortion looks like, noting that he had “blessed the pro-life movement” with it.

Thank you for the truly accurate (and therefore horrifying) portrayal of abortion… sucking out the brains of a PERSON because that person is inconvenient to you. You blessed the pro life movement with this.

Another cheekily referred to Carrey making “a valid point”, arguing each aborted child has the potential to fulfil a variety of socially significant roles:

You’ve made such a valid point here Jim…each aborted child had the potential to be anything from a game changing comedian, to a Governor, President, Nobel Prize winning Inventor, Dr. to find the cure to cancer…

However, many rushed to vocally defend Jim Carrey in his distinct satire, publicly asking pro-lifers to respond to the issue of kids waiting to be adopted:

But they PRAY and send good thoughts while wringing their hands on their NRA towel. If they’re so pro-life it doesn’t show. Why are there so many kids waiting to be adopted? All the pro-lifers need to put up or shut up.

One suggested that “disturbing” someone is already “an emotional reaction”, as it has been designed by Carrey.

The imagery is ironic. Although disturbing you are having an emotional reaction and missing the point. Mr Carrey pushed your buttons…

However, the stance was promptly retaliated against:

Hey Jeannine — He didn’t push my buttons and I’m not reacting emotionally. I hope you’ll come to see there is a middle way: Compassionate healthcare for women who are experiencing unwanted preg. and a pro life position for HUMANS in the womb.

This is just the latest in a series of visual escapades undertaken by Jim Carrey, who frequently takes to Twitter to address issues that he personally considers to be socially relevant and important. In March, the star actor infuriated the granddaughter of the late Italian Fascist and wartime leader Benito Mussolini.

"B******," commneted Member of the Italian parliament Alessandra Mussolini taking offence at a picture by Carrey depicting the fascist leader hanged upside down along with his mistress Claretta after their execution. ”If you’re wondering what fascism leads to, just ask Benito Mussolini and his mistress Claretta", Carrey captioned the picture, stirring a wide-reaching controversy online.