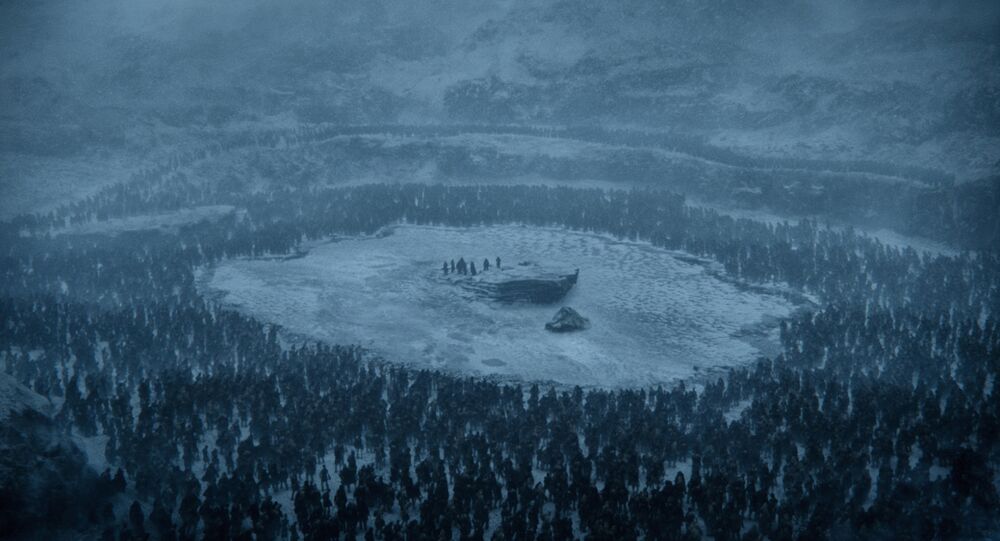 As the eighth season of Game of Thrones premiered this week, fans of the show have been speculating over the true meaning of the Night King’s ominous spiral symbol.

Game of Thrones writer Dave Hill, who is responsible for “Winterfell”, the first episode of season 8, has revealed to the New York Post the significance of one of the fantasy series’ most enigmatic symbols: the White Walkers’ spiral pattern.

“As we saw with Bran and the Three-Eyed Raven, the spiral pattern was sacred to the Children of the Forest, who created the Night King by sacrificing a captured man in a spiral ‘henge of stones’. The Night King then adopted the symbol as part of blasphemy, like Satan with the upside-down cross”.

As the Wall came down in the season 7 finale in a dramatic plot twist, fans were suspicious that the Night King’s army would first hit Last Hearth in the eighth season: and they were right.

The first episode of the newest season showed that the army of the dead had left a chilling message to those living in Westeros, having hung a child in the middle of the pattern and surrounded his corpse with extra body parts that made a spiral shape.

The symbol has repeatedly occurred on Game of Thrones beyond the Wall: in fact, a similar pattern was spotted in the pilot episode, when three Night’s Watchmen discover it and are then attacked by a wight child.

READ MORE: Game of Thrones Recap: Who is Still Alive in Westeros as Season 8 is Coming

Then, viewers can see the spiral pattern in Season 3 when Jon Snow and Mance Rayder discover horse corpses left by the White Walkers from the battle with the Night’s Watch.

Sign first appeared in season 3. Mance Rayder, Jon Snow and the others went to the fist of the first men to confirm the Night's watch men were killed instead they saw dead horses heads and bodies arranged in a large spiral art. To which Mance said:#GameofThrones pic.twitter.com/flFEEYx9PK

Some have noticed that the symbol can be seen at the cave on Dragonstone, the home place of the Targaryens; what’s more is that fans speculate that the spiral image resembles the sigil of the Targaryen House, sparking a theory that it might be evidence that the Night King was once a Targaryen.

I may be a conspiracy theorist but the white walker spirals look kinda similar to the Targaryen sigil…. yay or nay? #GameOfThrones pic.twitter.com/FMef9vLXrj

The White Walker spirals & the Targaryen symbol look so much alike. Rhaegar is indeed the night king. #GameofThrones pic.twitter.com/dpfRhDNGVs